Waffle fried chicken is chicken coated with waffle batter and fried until crisp on the outside and tender and juicy on the inside. With maple syrup for the kiddos and spiked syrup for the adults.

I’m not a waffle-and-fried-chicken kind of guy. I never quite got the combination. I got fried chicken, sure. Who doesn’t? And I got waffles. But never the twain had met on my plate. I don’t know when the idea to combine them–essentially, coating chicken pieces with waffle batter–hit. But it intrigued me. I liked the idea of the slightly sweet batter frying up crisp while tucked inside was juicy thigh meat. (You can use chicken breast, if you must [insert BIG eye roll], but dark meat is so much more flavorful, Blanche!)

I drenched my first attempt in pure maple syrup, and it was…an unmitigated disaster. Nothing but sweet stickiness. That’s when I reached for the bourbon. I even added some to the syrup. And a little cayenne and hot sauce lent the maple sweetness some depth and balance. I’d like to take credit for the nugget-ized version you see here (I originally went with strips), but these were the brilliant idea of our photographer, Cenk Sönmezsoy. Huzzah, huzzah!–David Leite 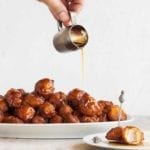 Waffle fried chicken is chicken coated with waffle batter and fried until crisp on the outside and tender and juicy on the inside. With maple syrup for the kiddos and spiked syrup for the adults.
Prep 45 mins
Cook 15 mins
Total 1 hr
Mains
American
6 servings
765 kcal
5 / 2 votes
Print Recipe

For the waffle fried chicken

Holy moly. This was so good. Waffle fried chicken could be a spectacular dinner, potluck, or even brunch. I sincerely have no complaints and will be saving this recipe forever. I HIGHLY recommend using chicken thighs and not breasts to maintain moisture because the result was absolutely decadent.

The recipe notes that the batter is really thick, and this is 100% true–don’t let this scare you. The fried batter on the exterior of the chicken is part of the appeal! I also highly recommend you not try to wing it without a thermometer. I got a little careless with one batch and let the oil get too hot, so the exterior was a little on the dark side (still amazing on the inside, so that was some consolation!).

Again, this was fantastic and I wouldn’t change a thing. This recipe makes a ton of chicken. I’d say easily 8 servings.

This waffle fried chicken is really good!! This is a delightful combination. Truly. I’m not a big waffle eater but the two paired together with a sweet and spicy dipping sauce that’s truly delightful.

It was good cold and I reheated it in the oven a few days later and it was still good!

I also tried a second sauce of Lyles golden syrup and Texas Pete, which was also super yummy!

It could serve 6—but only 4 if everyone’s hungry.

I was attracted to this recipe for its unabashed indulgence. As if fried chicken were not enough, now it’s coated in waffle batter? Sign me up.

As a deep-frying novice, I was pleased at how well the recipe “worked.” In the end, my fried chicken preferences will likely lead me back to a more traditional crunchy coating rather than this crispy and cakey one, though it was a fun version to try that transformed my kitchen into a state fair booth.

I used Cholula hot sauce and it turned the batter a salmon-y color. It provided a little bit of spice that balanced the sweetness and vanilla. I definitely added more when serving to get more of a savory flavor. I used boneless chicken breast.

Knowing what I know about frying, I heated the oil past 360℉ because I knew adding chicken would quickly cool it down and make the coating soggy. At one point it got all the way up to 390℉, which resulted in dark brown coating, so I’d advise staying below 380℉.

To further prevent sogginess, make sure to not overcrowd the frying container, as I did in one round. The oil gets cooled down and the frying takes much longer, resulting in an oily coating. As the recipe says, it does indeed only take 2 to 3 minutes per side when the pan isn’t overcrowded. Your patience is worth it!

My best round of chicken was golden brown with a thin crisp outside and cakey middle. True chicken decadence. I served mine with maple syrup and hot sauce.

Because the waffle batter is on the sweeter side, you might want to sprinkle a little bit of sea salt on the chicken as it emerges from the oil.

As someone who grew up in the deep south, I’ve eaten more than my share of chicken and waffles. Never before have I cooked them together in quite this fashion.

The recipe was easy to make. The batter was thick after sitting in the refrigerator for 15 minutes. However, when I made it, I only used 1 tablespoon of the hot sauce and personally found it a little bland. Most people, and certainly the 2 young testers I had, would not have that problem. I cooked my chicken in 2 batches, drained it on paper towels before keeping it warm in the oven. I used chicken breast and 2 pounds provided 6 servings.

The younger crew was happy with maple syrup provided for dipping. The older members of the test crew tried the bourbon maple syrup. They were even happier. For serving to a crowd, and this is a recipe that could be served to a crowd, it would probably be best if 2 dipping sauces were provided, even if neither contained bourbon.

This recipe was simple and tasty. I thought it odd to add sugar but the chicken has a nice sweet flavor with the sugar in the batter and the maple syrup. The chicken was crisp. I would recommend it and would make it again, although preferably in a thermostat-controlled fryer rather than in a pan of hot oil.

I used Sriracha sauce in my batter, but I did not feel it was very evident in the final product, so I added more as I ate it. I found it hard to turn the pieces of chicken and found that although all sides were surrounded in hot oil the underside cooked more quickly and became browner than the other side.

While the frying takes a while, it’s well worth the time for a fun dinner. The nuggets floated in the oil so it was hard to flip them without them turning back over again. Initially, I placed the nuggets in the oil, after 2 minutes, I flipped them and held them down with the slotted spoon, for another 2 minutes. In between batches, it took few minutes to get the oil back to temperature. The 200°F oven was perfect to keep them piping hot. I’m not an expert at frying, but I found the 3 inches of oil to be too much. I think 1 1/2 inches would be plenty.