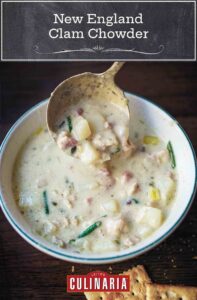 This New England clam chowder, put simply, is a classic. No other way to say it, no other way to make it. Rich, luxuriously creamy–but not too thick–and exactly the right proportion of clams to everything else. We know several folks who are calling it quits in their search for the best clam chowder recipe after trying this one.–David Leite

What type of clams should I buy for this clam chowder?

Typically, quahogs (below, pronounced CO-hogs) or cherrystone clams are usually used for clam chowder since they’re larger and yield more meat for the buck. (If you’re looking for a New England Steamer Clam Chowder, which uses soft-shell clams (AKA Ipswich clams), we’ve got you covered, too.)
If you buy the clams whole from the seafood counter, chop the meat roughly before using. Buying freshly already-chopped clams can save you some time and energy. Though fresh clams are usually pretty easy to find at most fishmongers, canned clams are a decent substitute and will save some money. 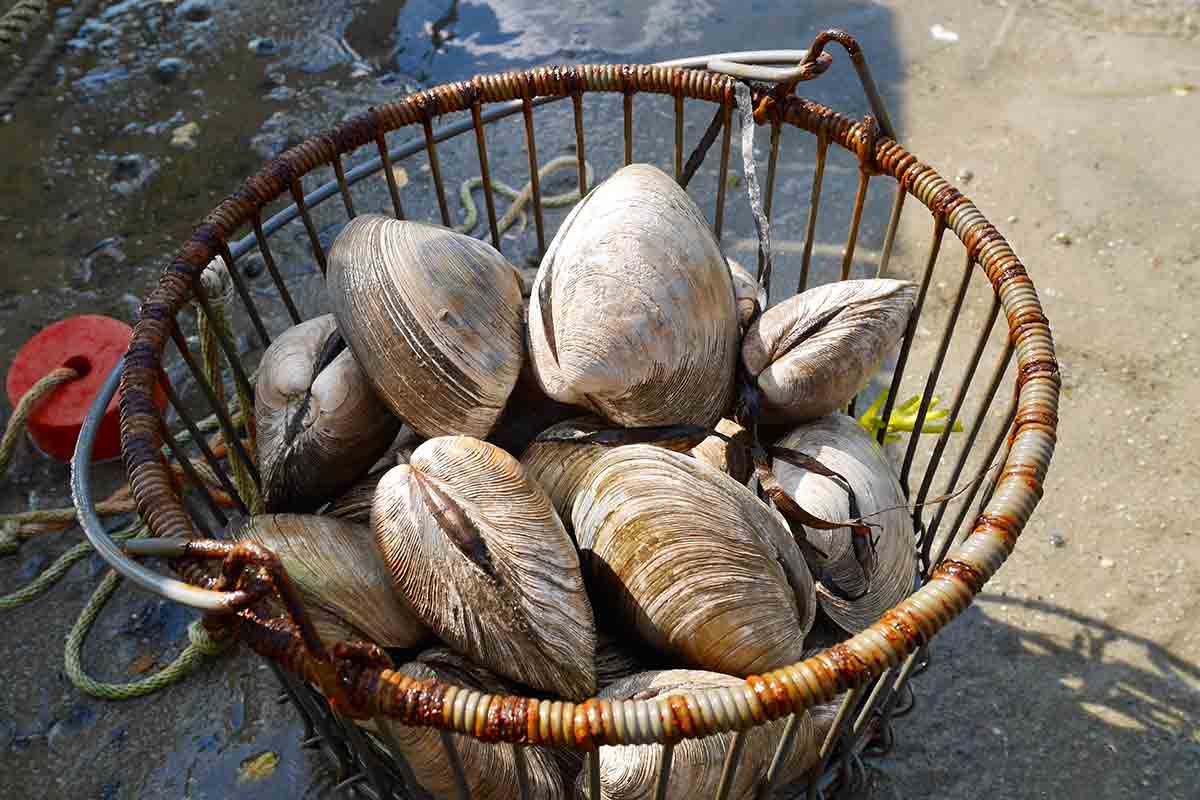 When are clams in season?

In New England, harvest season is year-round, but peak is May through October. If you’re looking to dig clams yourself, check your local shellfishing conservation guidelines. For many recipes, canned clams will work just fine as a substitute. They’re much easier to bag, are readily available, and you won’t get mud between your toes.

Yes. Be sure to freeze your chowder in airtight containers or heavy-duty freezer bags. Properly stored, it will be good for 4 to 6 months. When you’re ready to thaw your frozen New England clam chowder, remove it from the freezer and place it in your refrigerator overnight. Pour defrosted chowder into a pot over medium-high heat, cover the pot with a lid until it is brought to a slight boil. Be sure to stir regularly to prevent the cream from curdling. 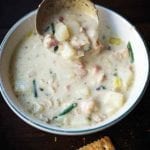 Wow. This New England clam chowder recipe was amazing! Filling and warming and making me yearn for a blanket and fire!

My Grammy always used to make us clam chowder whenever we’d visit, so this recipe caught my eye. It’s much better than her version—I used fresh clams, which I think makes a huge difference, though I’d never share that fact with her! My grocery store didn’t have any quahog or cherrystone clams, so I made do with littlenecks. It was a huge time saver to have them removed from their shells and chopped.

I didn’t use poblano as I wanted my 2-year-old to try this. We didn’t miss it at all because we could add our own heat by way of hot sauce to each of our individual bowls. For the wine, I used a New Zealand sauvignon blanc that we already had open. I chopped my potatoes pretty small (1/4 to 1/2 inch dice) so they were perfectly cooked by 12 minutes. I then added the bacon and clams and the entire thing was done in another 5 minutes.

Rather than using crackers, we served the clam chowder with a fresh baguette and butter as well as an arugula salad. I will be printing this recipe for the family binder as it’s one that I’ll turn to over and over again. I love when a recipe is this much of a winner.

There should be a special category for recipes like this called “Absolutely Amazing!” I’ve been trying to find a New England clam chowder recipe that approaches the clam chowder we had years ago along the northern coast of California. I’ve tried making different recipes. We’ve tried ordering it in restaurants in the Bay Area as well as up and down the coast, including places that are known for their clam chowder. We’ve never found anything that comes close. Until this recipe came along.

Not wanting to make enough clam chowder for 10 to 12 people, I cut the recipe in half. Perhaps I should have made the recipe as written, because the 2 of us finished the chowder the day after I made it—and we didn’t really have enough that second day. I used Sauvignon blanc for white wine. I had a huge can of what was called “restaurant-style chopped clams.” I sure wish that I could find them again—I have been looking—because they were large, plump, and so very tender. Draining the clam broth from the can gave me all of the juice I needed for the recipe.

The finished product was “Absolutely Amazing!” All of the ingredients worked together beautifully. They just worked. We served this with a lovely Viognier made by someone who knows how to deal with that grape. (Many winemakers seem to want to make Viognier taste like Chardonnay.) That particular wine with that chowder was a match made in heaven.

The poblanos were definitely an unexpected element but they worked. I diced them quite finely. In the future, I might bother to char the skins and slip them off. The rest of the ingredients are more standard. I used canned chopped clams and the reserved juice from the canned clams came to the exact amount needed in the recipe—how convenient! The recipe came together quite easily and was delicious. Because I needed to make it gluten-free, I used sweet rice flour in place of all purpose flour. I think the soup would also be just fine if one omitted the flour altogether. The wine I used was a very dry Riesling.

Wow! What a great chowder recipe! And it’s fairly simple to prepare! My family loved this chowder and actually agreed that it’s just as good (if not better) than what we’ve been served at some of our favorite chowder restaurants in New England.

This was my first attempt at making a chowdah. I used canned clams with no preservatives and I appreciated that I did not have to purchase extra broth. We do not have chopped clams available on the West Coast but I did find a vendor who carries frozen clams and I may try that next time. I only used 1 cup heavy cream and substituted the other cup of cream for half-and-half (premixed half cream and half milk) to cut out some of the fat calories. The chowder was still plenty thick and rich so I will use 2 cups half-and-half and 1 cup milk when making it again. I used a couple extra tablespoons butter and I’m glad I chose not to use the bacon grease as I got a clean flavor. I can’t wait to make this again!