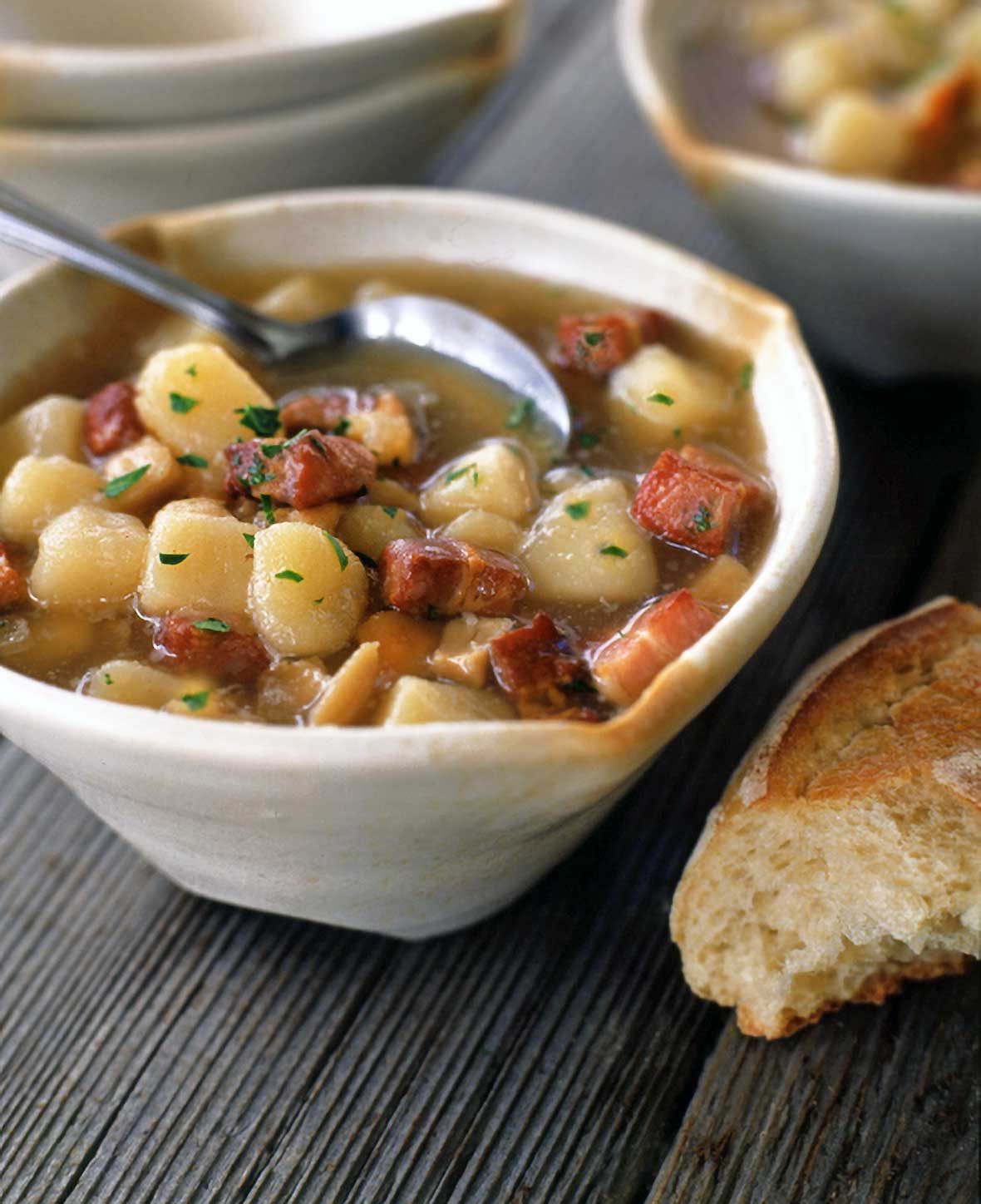 Scanning the cluster of chattering children streaming into the beige-brick building, the teachers finally spot the Handrigan kids: Timmy, Patricia, Michael, and Terry. Their metal lunchboxes gleam with characters from their favorite TV shows: the “Partridge Family” for Patricia and the “Three Stooges” for the boys. Unbeknownst to all but this clutch of co-conspirators, tucked inside those lunchboxes is the object of the teachers’ affection: quahog chowder, plus a lobster roll or two, courtesy of surplus ingredients from Mr. Handrigan’s fledgling seafood business. To the kids’ delight, they won’t be eating this meal come lunchtime, for oldest brother Timmy has whispered to a favorite teacher about his siblings’ boredom with their steady diet of seafood and their longing for the kind of lunches the other kids eat each day.

Which is why the teachers are standing by the school doors, holding the bags filled with those carefully wrapped sandwiches. Later that morning, right before noontime, the arranged trade will go down, after which the triumphant Handrigan kids will rush to the cafeteria to devour the much-coveted PB&amp;Js and ham-and-cheese sandwiches. The teachers, feeling quite fortunate and understandably sheepish, will slink off to an empty classroom to dine on a lunch of homemade clam chowder and lobster rolls.

“They learned pretty quickly we always had the good stuff,” says Patricia, now 42, laughing at the memory as she reminisces from her home in Narragansett, Rhode Island. “After a couple of these swaps, one of the teachers called our mother and said, ‘I’m so sorry, Mrs. Handrigan, but I have to confess, we’ve been trading your children’s lunches and giving them ham sandwiches.’ And my mother started laughing and said, ‘That’s okay with us. We can’t afford ham!’”

While the lobster rolls made far more frequent appearances at school, the clam chowder was the sentimental favorite of the teachers, loyal Rhode Islanders that they were. For this wasn’t just any clam chowder. It wasn’t the thick, creamy concoction known as New England or “white” clam chowder; nor was it the Manhattan version, viewed by many, mostly northerners, not as actual chowder but vegetable-soup-with-a-few-clams-thrown-in. No, Handrigan’s was the classic Rhode Island clear-broth clam chowder, dubbed by locals as quahog chowder.

“Clear-broth chowder has such a pure taste compared to other chowders,” says Linda Beaulieu, author of The Providence and Rhode Island Cookbook: Big Recipes from the Smallest State.

At home in her kitchen in northern Rhode Island, Beaulieu stirs a pot of broth chowder simmering on the stove. “It’s not that white chowder is bad. But really, you could put all that butter and cream on a shoe and it would taste good. With clear-broth chowder, you really taste the clams.”

So what, exactly, is Rhode Island clear-broth chowder? The essential ingredient is quahogs, large hard-shelled clams with a distinctively briny taste. Potatoes and onions are a must. Beyond that, it cook’s choice.

As with fried chicken or barbecue in the South, the finer points of making quahog chowder inspire intense debate among Rhode Islanders. The question of whether it’s best to chop, mince, or grind the quahog can prompt arguments so impassioned, a full-blown melee complete with quahogs pinging off foreheads isn’t out of the question. Purists insist salt pork is the only acceptable fat. Others thwart tradition and use vegetable oil, bacon, or butter. Varying opinions about the proper size of potato cubes abound. A dash or two of Worcestershire sauce is hailed by some, disdained by others. And in certain quarters, the mere mention of fresh herbs can trigger a level of scorn usually reserved for Yankees fans in this decidedly Red Sox-obsessed state.

Still, whatever the details of a specific recipe, the maxim for this chowder remains the same: the quahog takes center stage.

“When you first hear about quahog chowder, you think it might be kind of boring because there’s not much to it,” says Meridith Ford, dining critic for the Atlanta Journal-Constitution, who lived in Rhode Island for 16 years, five of them as the Providence Journal‘s dining critic. “In reality, there’s an art to making broth chowder. When it’s made right, the ingredients’ flavors are so pronounced, you can taste each one individually. It allows you to appreciate the clams on their own. At the same time, the flavors blend together in a way that makes the chowder a chowder.”

Clear-broth chowder isn’t as odd as it may sound. According to 50 Chowders: One Pot Meals — Clam, Corn &amp; Beyond by Jasper White, a broth chowder was the first-known published clam chowder recipe in the United States, printed in 1833. As clam chowder grew in popularity, cream-based versions became common in most of New England, while in New York tomatoes and other vegetables were added.

One theory for the division, explains White, is the fact that by the late 1800s, both clams and tomatoes had become big businesses on Long Island, possibly inspiring the chowder combination. Still, the precise reasons for the regional preferences remain unclear. In any case, by the early 20th century, writes White, “All of northern New England abhor[red] the tomato-based chowders from Connecticut and New York, while in Rhode Island, cooks add[ed] neither milk nor tomatoes to their chowders.” Which is why cookbook author Beaulieu grew up eating clear-broth chowder at countless gatherings with her extended family in Rhode Island.

To make quahog chowder, Beaulieu uses an old Yankee family recipe her mother clipped from a local newspaper in the ‘40s. Since her parents were immigrants — her mother from French-speaking Belgium and her father from Italy — they didn’t have their own family recipe for chowder. “So we borrowed someone else’s,” she says. The recipe is a study in minimalism: water, quahogs, salt pork, onions, potatoes, a bit of pepper, a dash of Worcestershire sauce. The cooked minced quahogs soften, the tiniest pieces practically melting into the broth, thickening it and infusing it with intense ocean flavor. Each spoonful blends broth, briny clam essence, sweet onion, tender potato, and crispy pork bits.

As for Brian Handrigan, now 70, the father of those ham-sandwich-loving children, he still eats his own chowder every day. “It’s worked for me for 50 years,” he says, adding, “I figure: Why stop now?” And he still works in the seafood business: For the past 17 years, he’s co-owned Champlin’s Seafood, a counter-service restaurant and seafood market in the bustling fishing village of Galilee, Rhode Island. Champlin’s is the kind of place where the chowder is served in white Styrofoam containers with plastic spoons and crackers in noisy cellophane packages and a Red Sox logo tops the Budweiser tap. It’s also where Narragansett Beer — the newly resurrected, beloved local lager, first brewed in Rhode Island in 1888 — is on draft.

To appease out-of-state customers who may hesitate to eat their chowder straight-up, the restaurant offers a white and a red chowder — not to be confused with thick, creamy New England or vegetable-laden Manhattan deviations. The base for both versions at Champlin’s is the broth chowder, with milk added for the white and tomatoes for the red.

Clear-broth chowder remains the bestseller, by far. On a typical summer day, according to Handrigan, when the restaurant serves more than 100 gallons of chowder, about 70 percent is clear-broth, the rest split evenly between white and red.

“Native Rhode Islanders might stray once in a while and try the white or red,” he says. “But they always come back to the clear-broth.”

Handrigan’s daughter, Patricia, helps dole out all those servings of chowder when she works part-time at Champlin’s during the summer rush. She’s now a devoted fan of clear-broth chowder, as is her husband, also a native Rhode Islander. And the couple’s sons, ages 6, 11, and 15?

“Well, right now,” she says, “the boys prefer the white chowder. They like the potatoes and the crackers, and to be honest, they like that the milk covers up the strong clam taste. But I’m sure when they grow up, they’ll come around to loving broth chowder, just like we did. I mean, they are Rhode Islanders.” Originally published July 17, 2006.

© 2006 LC Editors. All rights reserved. All materials used with permission.