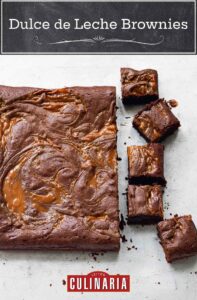 Too cakey if they’re overcooked, too saucy if they are undercooked, chocolate brownies need to be baked for just the right amount of time to get that perfect texture. Using good dark chocolate is key to that intense depth of flavor that a great brownie has. I use chocolate that contains at least 55% cocoa solids, but if you want a serious cacao kick, try using chocolate with 70% or 75% cocoa solids. Don’t scrimp on the sugar when you are making brownies; it’s the all-important ingredient for the crisp top layer.–Rachel Allen 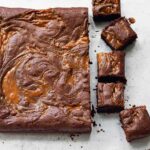 A chocolate brownie is a fudgy square of deliciousness with just the right amount of goo, and it beats all when it comes to downright indulgence. I adore the effect of the creamy dulce de leche swirled through dark, fudgy brownies.
Rachel Allen
Prep 10 mins
Cook 35 mins
Total 2 hrs 45 mins
Dessert
American
16 brownies
238 kcal
4.67 / 3 votes
Print Recipe 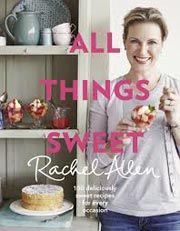 *Can I make my own dulce de leche?

It couldn’t be easier to make your own homemade dulce de leche. Simply take off the labels from two 12-ounce cans of sweetened condensed milk. Place the cans in a large pot and add enough water to submerge them. Bring to a boil over high heat then lower the heat to a rapid simmer and cook for about 4 hours. Make sure the cans are always covered by at least 1 inch of water, adding more as needed; otherwise, you might have a dulce de leche explosion on your hands (not as fun as it sounds, we promise). Remove the cans from the water, let them cool, and voilà, you’ve got DIY dulce de leche!

These brownies are delicious, although they’re very sweet and very rich.

I used a whole 13.4-ounce can of Nestle’s La Lechera Dulce de Leche. At first, I thought it was too much, but the amount turned out to be correct. I used Ghiradelli 60% bittersweet chocolate and Scharffen Berger cocoa. I used an 8-inch Pyrex cake pan and baked the brownies for a total of 40 minutes. They were still very soft in the middle, but I was able to cut them once they cooled. They were very gooey. I think the best thing to do would be to cool them completely, put them in the fridge until cold, and then cut them.

I was able to get 16 squares, but I might cut them smaller next time since they’re so rich. You could serve the squares with a scoop of vanilla ice cream for a brownie caramel sundae.

This is also an easy recipe to put together although the dulce de leche takes time to make. It took the brownies about 35 minutes to bake.

I used a store-bought can of caramel sauce. After 20 minutes in the oven, the brownies appeared done when the caramel looked gooey and the brownie looked dry and was starting to blacken slightly, so I decided this was enough cooking. I should have covered the brownies with foil and baked them longer, as they were underdone. I cut the finished brownies into 12 large pieces rather than the 16 suggested, as my tin was rectangular rather than square.