Gluten free matzo balls? Believe it. This recipe turns chickpea flour into a darn fine substitute that allows all of us who keep gluten-free to take part in a familiar Passover tradition.

Adapted from Lindsey S. Love | Chickpea Flour Does It All | The Experiment, 2016

This gluten free matzo balls recipe is a near replica of regular matzo balls. For the uninformed, matzo ball soup is valued as much for its comforting familiarity as it is for its innate characteristics. So for those who can’t have the traditional matzo ball soup when craving comfort, this recipe is for you. Rest assured, the creator of these gluten free matzo balls made them over and over and over again (and so did we!) to ensure they’re “fluffy and dense in just the right places.” She nailed it. Their flavor is phenomenal. Although kindly note that this recipe is not strictly kosher for Passover.–Renee Schettler Rossi 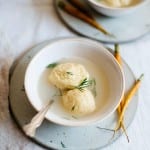 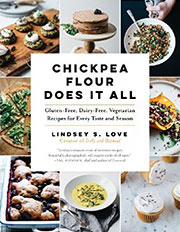 I grew up eating my Lithuanian mother’s home cooking. It seems to be little known that a lot of traditional Eastern European food is shared across the cultures of the region. One of my favorite dishes was her simple soup with cabbage and klazkius, which were matzo balls all but in name. So what I’m saying is, I know my matzo balls. I love them so much that ever since I went gluten free 6 years ago, I’ve searched and searched for a worthy alternative to my mom’s wheat flour version. Only once before now had I come across a potato flour-based recipe I thought was worth its salt—and I lost it. That was a year ago, and try as I might, I couldn’t ever get hold of another one….until now!

I was skeptical of the chickpea flour (though granted I’ve never used it before now) and wondered if this wouldn’t turn out like some kind of mushy falafel. Instead, the matzo balls were tender without being mushy and held together beautifully, even after soaking in a chicken and leek broth for a bit. They took on the flavor of the lightly seasoned broth and were appropriately subdued. This was a warm and hearty addition to the table that I will definitely be making again and again!

The uncooked chickpea flour dough was really, really “green” tasting, like uncooked beans, so I was worried, but the finished matzo balls were really nice. There was no chickpea flavor at all once cooked. I found the total hands-on time to be adequate—mine went to like 25 minutes, but with the speed I work at, which is somewhere between glacial and a mosey, the difference is negligible.

The matzo balls increase in size quite dramatically in the simmering water. Using 2 tablespoons dough gives you a New York deli-style matzo ball—the one-really-big-matzo-ball-in-a-dish-of-soup effect. We both prefer them as a one- or two-bite affair, with several in a bowl of soup. I did make my own chicken broth, and as this is a minimalist affair, the overall result rides very heavily on the quality of the broth. I would definitely recommend others do the same. I will make these again.