These small batch brownies are made from scratch and baked in a loaf pan, which means they make just enough for two so you don’t have an entire baking pan of brownies sitting around all week tempting you. You’re welcome.

These small batch brownies are magnificently fudgy and chewy and chocolatey and among the best we’ve ever experienced. Which makes them beyond tempting. And because they’re made in a loaf pan, they make a modest number rather than entire panful, just enough to share with those you love most in the world, with none left over to tempt you the rest of the week. If you want to go all out, you can smother them with frosting, although if you simply can’t stand to wait those extra couple minutes to frost them before you dive in, you won’t be missing out.–Angie Zoobkoff

We know what you’re wondering. Just how fudgy are these brownies? It’s a common question we ask whenever we peruse a new recipe that promises chocolate brownie fudginess. But don’t take our word for it. Take a close look at the recipe and you’ll immediately be able to discern juuuuuust how fudgy it really is when you understand the following facts of brownie making.

The fat to flour ratio

The best way to ensure that the recipe you’re making will be fudgy is to look at the fat to flour ratio in terms of the weight of each ingredient. You want them to be even at the very least. The more fat, the fudgier your brownies.

The absence of leavener

The addition of leavening will affect your brownies, too. Leavening (baking soda or baking powder) is for anything that you want to rise—cakes for sure, but not brownies. The denser, the fudgier.

Not overbaking your brownies

A modest amount of time in the oven is essential. No matter if the recipe suggests leaving them in the oven for 40 minutes, we usually start checking ours after 25 minutes.  Overbaking is the enemy of fudginess. 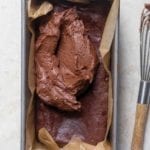 These small batch brownies are made from scratch and baked in a loaf pan, which means they make just enough for two so you don’t have an entire baking pan of brownies sitting around all week tempting you. You’re welcome.
Prep 30 mins
Cook 1 hr 30 mins
Total 2 hrs
Dessert
American
4 to 6 servings
651 kcal
5 / 2 votes
Print Recipe 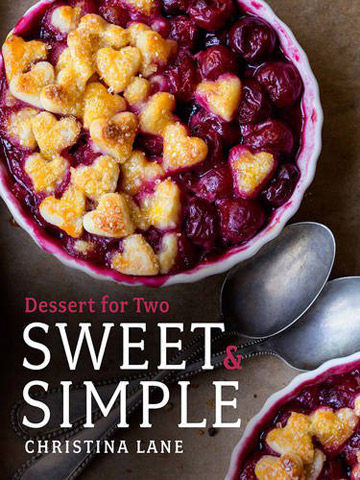 For the small batch brownies

For the frosting (optional)

These small batch brownies were fudgy and delicious! Really, they rank top among some of the best brownie recipes I’ve tried—and I’ve tried my fair amount of homemade brownies. These were very good and fudgy (not cake-like) brownies.

It made nearly the batter my normal recipe makes but put into a loaf pan instead of a 9-by-9-inch baking pan. An excellent brownie recipe. I think the brownies could have gone without the frosting, though I liked it, for sure.

These small batch brownies were delicious and very easy to make. They reminded me of the iced brownies you can buy in many bakeries in the New York and New Jersey area. They’re chewy and fudgy inside with a nice crisp top. Although the brownies are fine on their own, the frosting turns them into a more luscious treat.

I cut the brownies into 8 large squares. They should be kept in the refrigerator otherwise the frosting will get too soft. And they’re good straight out of the fridge, too! Next time I would add about 1/4 cup toasted, chopped walnuts. I think this would add texture and cut the sweetness.

These small batch brownies are good brownies. They’re fudgy and easy to throw together. I would suggest adding them to your arsenal of brownie recipes.

I didn’t think the brownies needed the frosting. My taster disagreed. Like any other brownies, these would be great with all sorts of toppings and additions. I like to think of a basic brownie as a blank canvas. I love being able to make small batches of sweets and I would love to see this made even smaller. The parchment paper kept the brownies from sticking and made for a simple and clean removal from the pan.

I enjoyed the ease of whipping up this rich and quick small batch brownies recipe in a loaf pan. I’d say this recipe is definitely more chewy than fudgy. I could take or leave the frosting—this is a sweet enough dessert without it but certainly no one is going to complain about chocolate frosting!

I think 30 minutes baking time would give that perfect balance of a slight crust on top and a wet chewiness on the bottom. I was almost there—the very edges of the brownies might have gotten a little more done than I would prefer, but even having baked it for 32 minutes, there was still a lot of chewiness there. I might like more of a pourable frosting or ganache that’s bittersweet just because of how sweet the brownie already is. I think using a nicer cocoa powder in the batter here really makes a difference.

I made the frosting in a mixer with the paddle. I cut the butter into 6 pieces and first beat in the cocoa powder starting on medium speed for about 30 seconds so that the cocoa wouldn’t fly around, and then turning it up to medium-high for another 1 1/2 minutes, until the butter was no longer in pieces and the mixture was pretty smooth. Then I added the confectioner’s sugar and milk, beating another 30 to 45 seconds. I finished the frosting by hand, stirring with my spatula, and added about another 1/2 tablespoon confectioner’s sugar just to smooth it out a bit.