Tagine refers to the covered cooking vessel in which a dish like this would be prepared as well as the dish itself. You can use a heavy covered brazier or Dutch oven. This sweet and hearty version of a tagine has slow-cooked squash chunks bathed in spices, prunes, shallots, garbanzo beans, garlic, and almonds.–Robin Asbell

If you’re been sniggering and turning red ever since you read the word brazier above, kindly take note, the author said brazier, not brassiere. Although this ridiculously simple one-pot recipe is a sort of support for home cooks everywhere, so we can understand the connection. (If, like us, you’re wondering exactly what brazier means, the term originally referred to “a receptacle for burning charcoal or coal.” It later came to mean, well, we think you can easily figure that out given the context. Consider it an extension of your seventh-grade English class.) 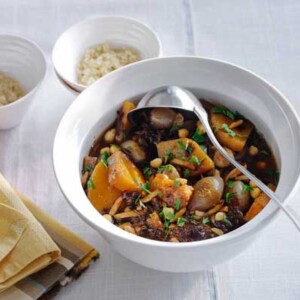 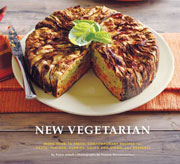 For the squash tagine

Though most tagines take much longer to cook because of a meat component that requires slow cooking, like this slow cooker chicken tagine, this is a hearty vegetarian version that cooks up in less than 30 minutes. The combination of ingredients make this not only a very tasty dish, but a dish that fills the house with a wonderful aroma. The recipe calls for just 1 cup vegetable stock, although I ended up probably adding an additional 1/2 to 3/4 cup more, as the squash absorbs the broth quickly and will dry it out.

This is a very flavorful Moroccan squash stew. It’s easy to make and it’s a very wholesome one-pot meal. The smell of the lemon rind permeates the entire stew. I added 3 cups stock instead of 2 1/2 and it still made a very thick stew. If you want a soup, then you need to add more stock. I served it over quinoa instead of couscous as that’s what I had handy in the pantry.