Chinese smashed cucumber salad is a centuries-old tradition that’s served as a chilled condiment of sorts during summer. This rendition is inspired by the Chinese classic yet takes it in a slightly different direction with the inclusion of fresh chile pepper rather than chile-infused oil or crushed red pepper flakes, a splash of fish sauce for a different sort of oomph, and fresh herbs.–Renee Schettler Rossi 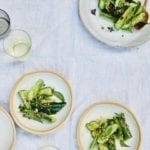 For the smashed cucumbers

This Chinese smashed cucumber salad has a kind of a sleeper quality about it. Unassuming ingredients brought together to provide a wallop of flavor. I frequently make a version of the Japanese cucumber salad sunomono. This salad is sunumono on steroids. The addition of the chile pepper takes it to the next level.

This salad is practically perfect in every way. It can be assembled in a matter of minutes and offers up cool, crisp, and crunchy that will be welcome during the heat of the summer.

I used Persian cucumbers. I let the salted cucumbers rest for 1 hour. They maintained their shape and were juicy and crunchy. Most of the prep time was devoted to smashing the cucumber with my rolling pin. It was a little easier the first time as cucumbers were a little smaller. I had very firm cucumbers on the second test and it took a little more effort to break them up.

The recipe calls for Thai bird chile peppers. I couldn’t find any so substituted a serrano chile instead. As my husband is somewhat averse to those chiles topping the Scoville meter, I seeded the chile and used only 1 serrano. It was enough to infuse the dressing with a tickle of heat. The quantity of chile pepper can be adjusted to suit the taste of the chef.

It will pair well with almost any meat. I served it with salmon and steamed rice.

This cucumber salad may now be the way I eat cucumbers. It’s flavorful, refreshing, and has a nice lip-tingling zing from the chili pepper. My dinner guests also gave the cucumbers rave reviews.

I was unable to find a Thai chile so used 1 serrano chile, seeds removed, cut in half and thinly sliced. For me, more chile pepper would have overpowered the dish.

I ended up letting the cucumbers rest for a couple of hours. The texture wasn’t crisp and wasn’t mushy…somewhere in the middle. Once I added the dressing to the cucumbers there was no need to adjust the seasonings. I’m looking forward to leftovers today and hope that they are still a delicious snack.

I make a marinated cucumber salad much like this recipe almost every week. It’s always fun to play with a recipe and try new techniques within the same framework. This version is delicious; it’s light and refreshing with a sumptuous balance of oil and spice dripping off of the shards of crushed cucumber.

The difference between this recipe and the method I usually use is the additional step of salting and draining the cucumbers before marinating them, which does change the texture slightly. They became more flexible and the flesh turned more translucent after salting for 30 mins and draining them. Even so, they still had that satisfying crunchy texture. The texture and appearance changed from very juicy and opaque to more flexible and translucent.

This was a solid 3 servings, could have been 4 if I used larger cucumbers. I did adjust the fish sauce—I doubled it!—because I LOVE that flavor in this context.

I make two similar salads (one really spicy, one not too spicy) and this is now going to be added to my recipe box. It’s a nice salad that won’t be too spicy for my friends that tend to shy away from spicy things. I found the way the cucumbers were prepared to be an interesting way to serve them. Even though my first whack with the rolling pin ended up covering me in cucumber gunk (an unexpected face mask) I might have to prepare the cucumbers for my two other salads the same way.

It served 4 as a side dish along with Thai-style turkey burgers.

“Refreshing” is the word that comes to mind when thinking about this smashed cucumbers recipe. We loved this Asian-inspired side dish and served it with a broiled salmon and some fried garden squash.

I salted the smashed cukes and let them sit for 1 hour in the fridge. They exuded a lot of water during this process which, in turn, made them more crispy overall when tossed with the vinaigrette.

This served 4 to 6 people very nicely as a side, depending on how hungry everyone is. The flavors were lovely and the dish overall was just spicy enough. And did I mention, how fun it is to lightly smash a cucumber with a rolling pin?! This was a unique and fun recipe to make, and enjoyable to eat as well.

This is a wonderful summer side dish that adds some zip to the meal.

It took a few tries before I had success with smashing the cucumbers. Skin side up, place a small piece of plastic wrap over the cucumber so seeds don’t fly everywhere, and smash lightly with a rolling pin until the pieces split and I broke them apart. Once I figured out the system, it went really quickly and was actually kind of fun!

I didn’t use all the Thai chile seeds but did put some in. I was looking for a spice level that everyone could eat and still have flavor.

I’m thinking I would vary a bit next time and add a little more vinegar so they are slightly pickled. I like the tang of more vinegar and along with these other flavors. It seems like an easily adjustable recipe—you can adjust the heat, vinegar, and even the amount of sesame seeds and sesame oil. I served it next to grilled burgers and it was a really good match. The crunchy, slightly spicy flavors were wonderful and this is a great way to change up how you use cucumbers.

I know this could be a side or snack—with a hunk of tofu and a scoop of rice, this could easily be a meal. If so, I believe 4 is the maximum number of servings and, if wanting a vegetable-focused meal or presentation, 2 servings would be more bountiful when plated and more satisfying when served.

My short cucumbers from the farmers market were very short, so I counted 2 as one; hence, I used 12 very short cucumbers instead of 6 short ones. I happily smashed the cucumbers with the side of a chef’s knife. It was loud and made a pleasant rhythm on the stainless counter while I worked my way through the cucumber segments. I drained for 40 minutes.

I substituted the fish sauce with Golden Mountain Sauce, often recommended as a vegetarian substitute. I had a little trepidation about the Thai chilis, so I seeded them, and I was glad I did since even the very thin slices pack a powerful amount of heat. I minced the garlic clove. I was generous with my toasted seeds and even more generous with the torn Thai basil leaves.

I really enjoyed both the flavor and the texture of this cucumber salad. I often make cucumber salads but usually just thinly slice the cucumbers. This method gives some textural contrast by keeping the skin on and employing larger pieces. The salt gets absorbed nicely because of the draining time. Love the Asian flavors and felt like I could appreciate each element distinctly too—the Thai chili, the sesame oil, the Thai basil, the toasted sesame seeds.

I didn’t seed the Thai chilis as I like spicy. I smashed the cucumbers in 3 batches by putting them in a freezer bag and rolling over them with my marble rolling pin. This took about 5 minutes and was perfect. I let them drain for about 40 minutes. Texture on the surface of the interior of the cucumber was softened but still crisp where skin covered it.

I served this with miso-marinated Salmon, a good light meal for a hot day.

I was attracted to this recipe due to its ingredients and simplicity. It didn’t disappoint and it pairs well with a variety of dishes. I would make it again, and presume that as it sits in the fridge it would only get better! It’s an easy dish to put together and can be easily made along with other components of a dinner.

I let them sit for 30 minutes. The texture remained similar to what it was prior to them resting. They were crispy but not much water was released.

I served the dish with grilled chicken and rice.