This Japanese cucumber salad, called sunomono, is one of the simplest summer salads. All it takes is cucumbers, vinegar, oil, ginger, and lemongrass to start the conversation. 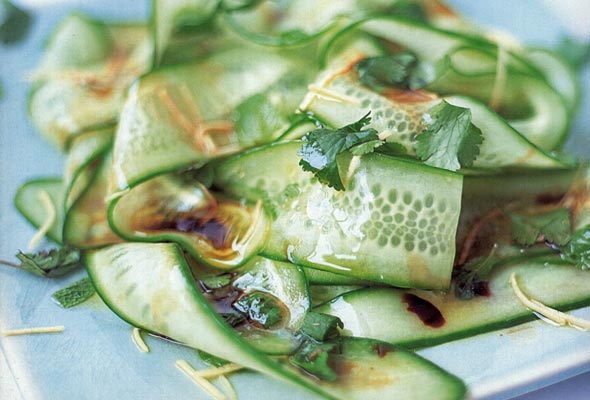 Simple. Surprising. Spunky. Just what we look for in a summer salad. Just what we found in this jumble of cucumbers, vinegar, and ginger. (Despite the title that Jamie Oliver confers on it, it’s not exactly the most traditional of Japanese recipes. But we’re certainly not holding that against it.) Originally published August 18th, 2010.–Renee Schettler Rossi 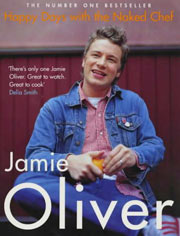 If I was looking at picking a recipe to be a taster’s choice based solely on simplicity, then this would be one of them. In addition to being simple, it also provides a light accompaniment to any heavier dish. Overall, it’s definitely worth putting in the book for a quick, unique salad option.

The ginger dressing with a hint of lemongrass fits perfectly with the crisp Japanese cucumber. I prepared the dressing ahead of time but left the herbs and cucumber prep until right before I served it. I used the soy sauce very sparingly and think it could be left out completely. I used my mandoline to slice the cucumbers after trying the old peeler technique and not getting as clean of slice as I wanted.

This recipe is a quick and easy way to enjoy cucumbers during the summer, and is a refreshing addition to a summer party. The ginger gives the salad an added kick. I had some cucumber slices left over, so I just added the remaining dressing, cilantro, and mint to the same container, and the salad worked great stored together.

I was initially apprehensive about this recipe, as I thought that the combination of vinegar and cucumber didn’t sound appealing. The recipe had lovely, zingy flavors from the fresh herbs, ginger, and vinegar.

I used a potato peeler to get thin slivers of cucumber, switching to a mandoline when it was difficult to use the peeler near the end of the cucumber.

This is one of the most refreshing and cooling summer salads I’ve tasted and is truly simple. I am a complete sucker for any Japanese/Asian/Chinese cucumber salad. When I read this recipe, I was intrigued by the fact that it didn’t have any sesame oil and called for very little soy sauce.

I tried the recipe two different ways—with cilantro and mint and then with basil and mint. Both were excellent. The basil and mint combination is nice for people who just can’t tolerate the taste of cilantro.

Many of the cucumbers that we find at the market are heavily waxed and tend to be very bitter if not peeled and seeded, so I decided to try an English cucumber. It was quite long, so I cut it in half crosswise first. This made the ribbons a bit more manageable. One thing I’ll do next time is add a little more ginger.

What little leftovers I had were wilted the next day and took on an almost preserved character. This wasn’t at all unpleasant—in fact, it was very good made into a sandwich with thin slices of tomato. The small amount of soy sauce and lack of sesame oil made this salad just a little different and lighter than typical Asian-style cucumber salads. Very much a recipe that I’ll make over and over!

This flavorful cucumber salad has a lot of potential. It’s nutritious, easy to make, and ultra-fresh. It could easily be a keeper with just a few changes: The cucumber ribbons, for instance, are pretty but not eater-friendly. I spent as much time cutting them while eating than I’d have spent cutting pieces of steak.

I also believe that while it was fresh, it had little depth. I found that I needed more than just “a few drops of soy sauce” to balance it out. I’ll make this salad again, but I’ll cut the cucumbers into smaller pieces and I’ll add more soy from the get-go for better balance.

I really like the flavor of the Ginger Dressing in this recipe, as it’s a bit different with the addition of the lemongrass. I also like the combination of the fresh mint, cilantro, and cucumber.

What I didn’t like, however, was slicing the cucumber into ribbons—I found this to be a big pain. I bought small cucumbers, so it took even longer to cut, and it didn’t help that I had doubled the recipe, which meant even more slicing. I didn’t want to use my mandoline because of the small size of the cucumbers, so I used an old-fashioned potato peeler, which gave me the right thickness but took forever to slice. It did make for a very pretty salad, but next time I’ll just slice them the old-fashioned way.