This bacon-wrapped meatloaf, made with ground beef and pork, has all the rustic comfort food qualities that we’re craving. And it comes together easily enough to make whenever said craving arises.

A free-form meatloaf has a few advantages. There’s more browned surface on the top, which is the part I like the most, and it looks nicer. This American classic simply must be served with mashed potatoes and gravy and leftovers make the perfect sandwich filling.–Laura Washburn

How do I make my meatloaf moist?

A lot of this depends on the recipes and its various ingredients. But a lot of the moisture depends on the percentage fat in the meat. For the moistest meatloaf, use the fattiest ground beef and pork you can find at your butcher or meat case. 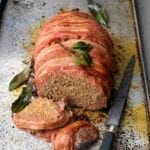 This bacon-wrapped meatloaf, made with ground beef and pork, has all the rustic comfort food qualities that we’re craving. And it comes together easily enough to make whenever said craving arises.
Prep 45 mins
Cook 1 hr 45 mins
Total 2 hrs 30 mins
Mains
American
6 to 8 servings
719 kcal
5 from 1 vote
Print Recipe 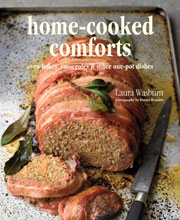 I love meatloaf and when it’s wrapped in bacon you just can’t go wrong.

This is a very moist meatloaf and I was concerned I wouldn’t be able to transfer it to the baking sheet without falling apart but it held together. It does tend to fall apart when you’re eating it. However, it doesn’t matter if it falls apart because the flavor is so good. You get a hint of the bay leaves but without overpowering and the chili sauce adds that little extra zip.

I love having the celery and onion added and next time I’ll finely shred some carrots and add to the mix. I used smoked sweet Spanish paprika.

I shaped my meatloaf into an 8-by-11-by1 1/2-inch oval. I checked the time after 1 hour and it was already up to 177°F. Although it was overcooked, the meatloaf was still moist. I didn’t baste the meatloaf and the bacon turned out perfect without drying out.

Update: Today I was trying to decide what to have for lunch and saw leftover meatloaf and mashed potatoes. I got creative and diced up the meatloaf, made a roux with beef stock, and added some cooked peas and carrots. I thinned down the mashed potatoes and made Shepherd’s Pie. I was so good and turned leftovers into a whole new meal.

This is a good meatloaf. And it’s elegant looking. The bacon adds a nice “crust” to it, not to mention the added flavor. It’s not unusual, but who’s looking for creative or unusual meatloaf? When you want meatloaf, you want that comfort food that’s moist, smells delicious as it cooks, and reminds you of a pleasant family meal. This meatloaf does all that and more.

This was the tastiest meatloaf I have ever had. The flavor was so good. I was hoping for leftovers but that didn’t happen. My family of 6 ate it all and everyone loved it.

I used lean ground beef and ketchup for kids as I didn’t want it too spicy. I let the loaf sit for about 5 to 10 minutes while I set the table. The slices held together perfectly!

I had never made a meatloaf before and so I wanted to try this recipe. The meatloaf makes a nice dinner when served with mashed potato, gravy and vegetables. I found that fussy people also enjoyed the meal so it was a winner all round.

I also disliked the bay leaves underneath the meatloaf, as it was impossible to tell where they were and I would find them on my plate and had to disgard them.

A super satisfying classic meatloaf dressed with bacon and the perfect combination of spices. This came together super easily and the use of a food processor made it even quicker and easier to get the perfect mince for the onion, celery, garlic, and parsley.

Given the choice of ketchup or chili sauce, I went for the chili sauce. We loved the spicy tang that it added and it worked well with the smoky taste of the bacon. I made a gravy right in the baking pan with the drippings from the meat and the bacon. Awesome aromas filled the kitchen while it was baking in the oven. I served it up to my boys (my husband and my son) with some mashed potatoes and string beans. Instant comfort on a fall day. I will be making this version again and again.

I wound up with more of a round-shaped meatloaf rather than an oval, which worked very well for laying the strips of bacon over the meat and covered the entire surface with the bacon.

I let it rest for about 10 minutes before moving it onto a platter. I made a gravy with the pan drippings right in the baking pan on top of the stove. I used a gravy separator to remove most of the fat, added some flour and water I mixed in a cup, and added that to the pan with some salt and pepper. The gravy really didn’t require any additional seasoning.

I then sliced some pieces of meatloaf about 1 1/2 inches thick and they held together quite nicely. I could have easily served 6 to 8 people. Since it was just the 3 of us, we had seconds and even wound up having enough for a tasty sandwich for my husband to bring to work the next day, which he said was even better than the night before.

For the bread crumbs, I used some old stale hot dog rolls that were in the freezer since about May. I toasted them and then broke them apart and blitzed them in the food processor. They worked very well.

I served up some mashed Yukon gold potatoes with the skins on and steamed green beans.

This recipe gives a moist and tender meatloaf and is full of flavor. Eggs and bread crumbs help hold the meatloaf together, but make sure that it rests at least 15 minutes before slicing. This way, you’ll have perfect slices of meat.

This is an excellent meatloaf recipe. It was easy, quick, and I already had all of the ingredients! This only takes 20 minutes from beginning to end to mix up, shape in the pan, and adorn with bacon. The bacon definitely adds a yum factor.

I thought the seasoning was just right and I wouldn’t adjust a thing. I liked that the vegetable mixture was minced and then sauteed. It added flavor, some color, and allowed the vegetables to be evenly distributed throughout the meatloaf mixture. The meatloaf was moist and held its shape when sliced and served. We ate the leftovers the following day and they were just as good as the day it was made. This is comfort food at its best!!!

Great meatloaf and mashed potatoes, a salad with a fresh vinaigrette, and hot rolls, and you will be serving up memories of mom’s Sunday dinner. This flavorful meatloaf, topped with bacon while sitting atop a few bay leaves, makes a generous meal with leftovers if you’re a small family.

Ours was very lean as I ground lean pork chops and stew beef meat, using large grinder holes. Both meats were quite lean. I would use pork shoulder next time for a bit more fat. I used full fat milk, regular paprika, and ketchup.

Make sure you use a large bowl for lots of room to mix all ingredients. I also placed it on a large piece of heavy duty foil with edges rolled up for an easier cleanup. I like the free form as its easy to cut and set on a platter for a nice presentation if you have a long platter to serve it on.

We dug into it as soon as it was done. We got 10 good size servings and after it cooled a bit, it cut just as nicely. A bit more fat and it would be moister. But it was very good as I made it.