These French-style pork chops with apples and Calvados are seared pork chops, sautéed apple slices, and a boozy Calvados-cider sauce. The recipe incorporates enough technique to make you feel fancy yet is still completely doable for a novice.

Porc à la Normande is the epitome of the classic pork-and-apples flavor pairing. A dish that has graced French tables for hundreds of years, it features an elegant presentation of pork accompanied by sautéed apples that are cut into chunks, rings, or even tournées (oblong football shapes), while a complex, rich sauce made with flambéed Calvados (a French apple brandy) brings everything together.

While traditional versions require hours and an arsenal of pots, we wanted an elegant rendition featuring perfectly cooked pork and apples and a savory sauce rich with complex apple flavor—without requiring a lot of time or cookware.–America’s Test Kitchen 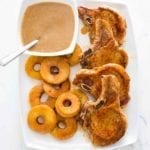 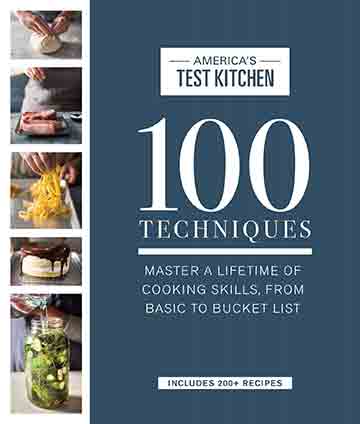 This recipe was such a “de-light” to complete! The results were absolutely fantastic. For the next time, and there will be a next time, the steps will be streamlined for sure. I may be able to even shave off 10 minutes or so. Each step was a building block to a wonderful finale. It was all worth it!

My favorite part, other than eating of course, was the flambé! Not once, but twice the pleasure of watching the flames lick away at the shallots and bacon, paving the way to a luxurious and complex sauce! Usually, sauce ingredients that are used for flavorings have a spent look and are discarded after they’ve served their function. Although the recipe described this expectation, I found that the resulting apple, shallot, and bacon purée was jammy and chutney-like so I actually served it as a chutney. The strained sauce was velvety, tangy, and savory. It complemented the thick, juicy, and peppery pork chops. The apples held their shape and were tasty with just a hint of sweetness. The finished dish was elegant, delicious, and evocative of the traditional Porc à la Normande.

Removed the thyme from the solids and served the solids as a chutney as they were delicious and did not look “spent.” The sauce was velvety and thick enough.

This made 4 generous servings that were served with thyme mashed potatoes. 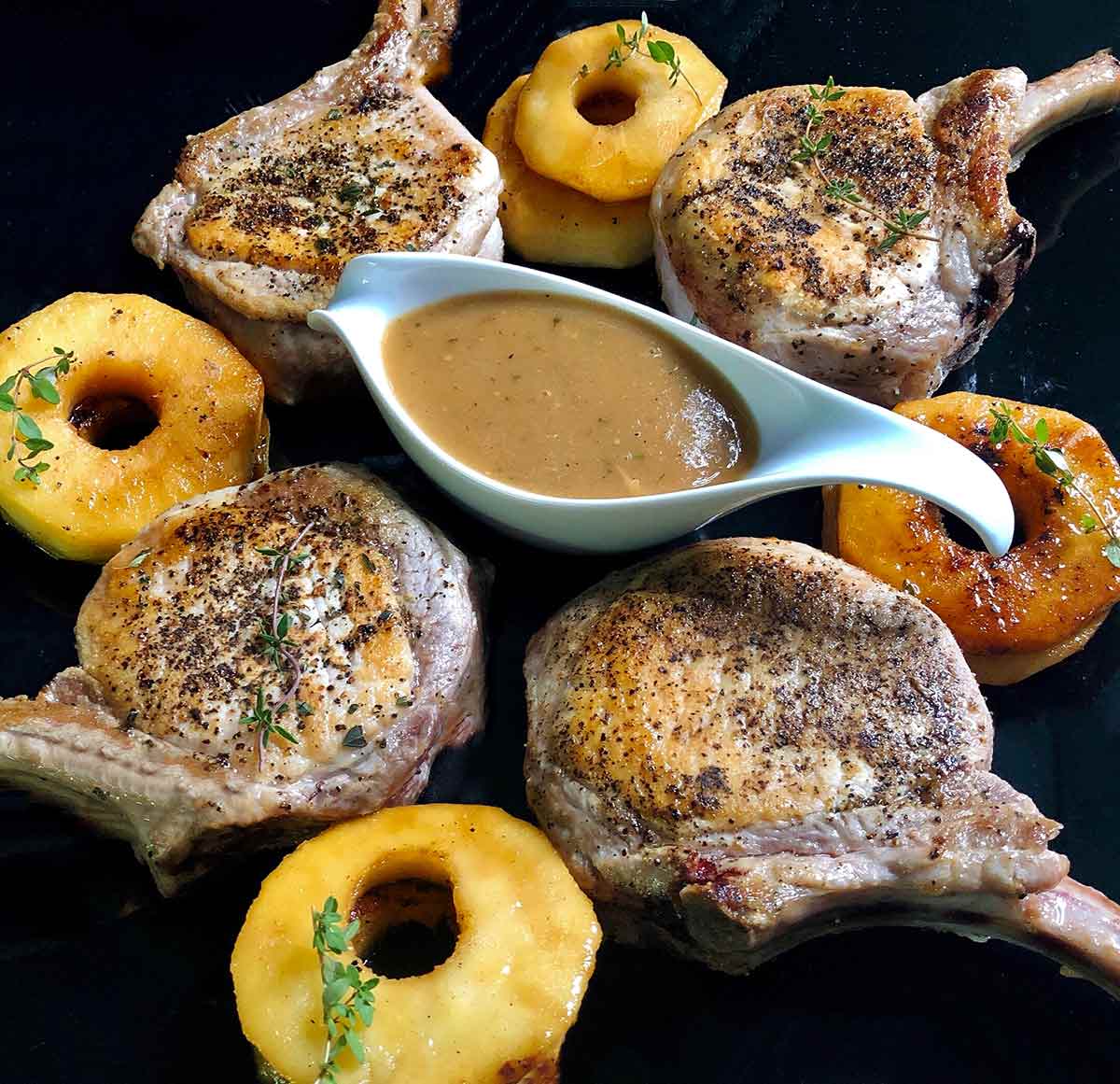 I love pork chops but usually find them difficult to prepare without being dry (unless prepared in a Crockpot). These chops were anything but dry! The chops were tasty and tender with very little cooking time.

I liked the process of browning them for a few minutes and then finishing in the skillet. This way they are nicely browned and make a pleasing presentation. The apple rings were such an easy, flavorful addition to the meal. They have a nice texture—not too soft.

Overall, this was a really good meal. With the addition of some flavor to the sauce it would be great!

This dish is wonderful. The pork was moist and tender and the sauce was wonderfully complex. I was in Maine this summer and visited a small farm, Switchback Farm, that was raising Mangalica pigs—you know, that crazy breed of pig that looks like a woolly sheep with a pig’s face.

I purchased some pork chops that I had tucked away in my freezer. This looked like the perfect recipe for those chops. This recipe calls for chops that are 1 inch thick, mine were closer to 1 1/2 inches, but they worked perfectly. At an interior temperature of 140°F, the pork chops were a beautiful light pink and very moist. The subtle infused taste of the apples they were cooked on was perfect.

To enhance this, I basted the pork chops periodically with any liquid that I found on the bottom on the pan. Add the wonderful sauce and you have a meal that could be served to guests or enjoyed by your family. Because time can sometimes be an issue around meal time, I prepared the sauce a little earlier in the day, then heated it in the microwave just before serving. It held up well and allowed me to serve this as a weekday meal. I will add this recipe to my list of favorites.

Surprisingly easy recipe for such a familiar yet sophisticated combination of flavors. While pork chops with applesauce was among my favorite dinners growing up, the sauce and the presentation of this method is much fancier than anything we had, yet isn’t too daunting for a weeknight.

In fact, we prepared it twice, with rib chops and then with center cut boneless. Both versions were very good, but there are differences and you do really want the rib chop if possible, for it delivered more flavor and seemed more tender. They were so delicious.

I tried two varieties of apple (Honeycrisp, and Golden Delicious) and both worked, though the Golden Delicious broke down a bit more in the sauce which was desirable to yield as much sauce as possible after reducing. I did use Calvados, a modest bottle, and the flambéing worked just as described. Locally, I can find unfiltered apple juice that would probably be described as cider in other locales.

This worked really nicely with some roasted potatoes as well as with roasted Brussels sprouts for a real fall meal. While sophisticated enough for a dinner party, it’s easy enough for spur-of-the-moment dinners that you can shop for on the way home, and since my neighbor generously shares his apple harvest, it is now on repeat request.

The bonus was to take the remaining solids of apple and bacon, and transform them the next day into an apple-bacon jam or chutney with the addition of a few more apples, and begs to be spread of rustic bread for sandwiches or dolloped alongside some curried vegetables. There was no possibility I would discard that.

A half-recipe treatment served 2 people. If you chose 14-ounce chops that may be too much for many folks, but since they are delicious you would end up eating it all anyway. I bought a French Calvados which was NOT expensive, a dollar more than domestic apple brandy. I would be reluctant to set flame to a precious and rare Calvados or my last bit of Germaine Robin.

The taste. OMG. The taste is just amazing. The apple, the cider, the pork. OMG and OMG again.

It serves 4 or two very hungry young men. I used my own stock (it is my first try, made from scraps and it’s soo good). Timing was perfect and yes, Calvados flambéing. I was doing it for tomorrow lunch but my son already ate a chop and he loved the sauce.

I am constantly on the lookout for new pork chop recipes. Firstly, because my husband loves pork chops and because I am trying to erase the sawdust experiences of pork chops long past. These chops, which come from my local farmers market, are soft, tender, and succulent, all the things you hope to find in a chop.

The sauce is velvety smooth and has a delicate flavor which is balanced by the cider vinegar. The sautéed apple slices are a good counterpoint to the sweet-sour profile of the sauce. If there is a pantheon of pork recipes, this one should be included. The mix of tart and sweet was perfectly balanced.

The need to flambé the ingredients might be offputting to a novice cook, but I would tell them to jump in and take the risk. While I am always wary of purposely setting things on fire, the instructions provided are clear and concise. The two-step flambé process can be completed without fear of burning down the house. One thing I did notice is that during the second round of flambé, I had flames on only one side of the pan, even with jiggling and moving the contents around. The flambéing step is the only really complicated step in the recipe. The rest of the preparation is simple and straightforward.

I was initially worried because the pork chops I had on hand were smaller than the ones called for in the recipe. I reduced the time I browned the chops, but did not need to make an adjustment for the oven cook time. It took 15 minutes to reach the 135° to 140°F with my electric oven. The meat was so tender after the 10-minute rest, and it dissolved on contact with my tongue. I can’t remember the last time I was this jazzed about a pork chop. This recipe seems to hit all of the taste sensations.

I served the pork chops with small roasted potatoes and Brussels sprouts. I added a dash of an Italian cider vinegar to the sprouts as they came out of the oven. The sides tied the entire meal together. These chops could also be served with mashed potatoes to soak up all the sauce. I would recommend the Black Pepper Mashed Potatoes as a good place to start.

This recipe would be great for entertaining or a quiet night at home. I will be making this on a regular basis. I have no suggestions to improve the recipe. I cooked only two pork chops, but made a full batch of the sauce. I plan to make again using the leftover sauce.