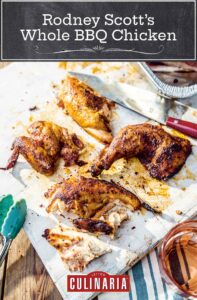 Rodney Scott’s whole bbq chicken is a revelation for those of you that love barbecue. Get away from that oven and bottled sauce—this recipe is sublime. First spatchcocked, then covered in Scott’s rib rub, and finally mopped with barbecue sauce, the flavor is layered through and through. 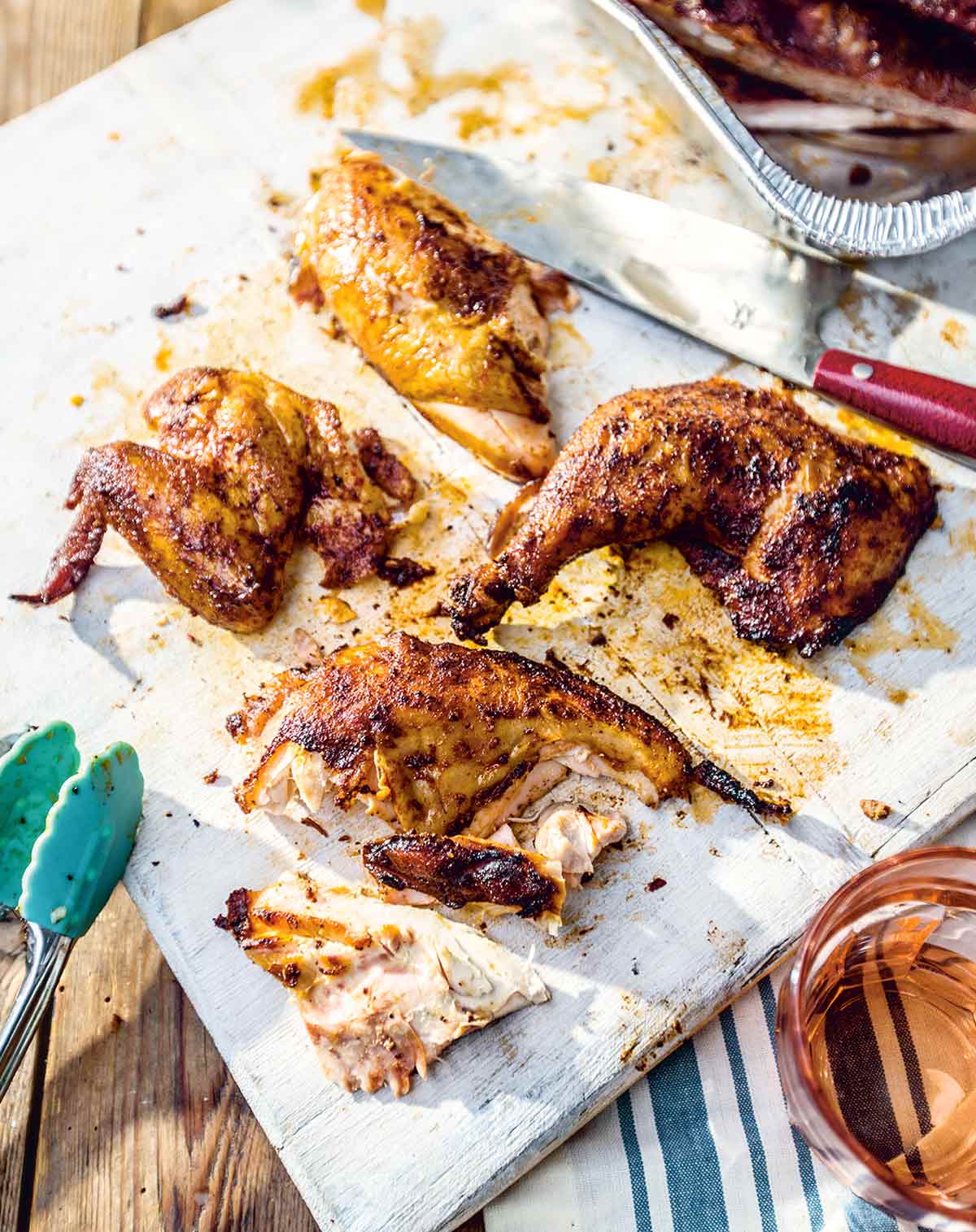 We raised chickens for their eggs when I was a boy. The difference between fresh-laid eggs and store-bought eggs is huge. Yard eggs are richer in flavor, and when you beat them, they even seem thicker in texture. We would buy chicken at the market to eat, rather than slaughter our laying hens. My mother used to make what we called “barbecue chicken” in the oven. It was basically baked chicken with commercial barbecue sauce. I don’t want to knock it. I enjoyed that baked chicken, but I wouldn’t call it barbecue. It wasn’t until later when we added chicken to the menu at the family restaurant that I got into true smoked chicken. The oven and the pit are very different, obviously.–Rodney Scott 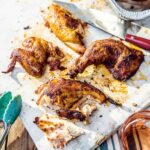 For the rib rub

*What is MSG and is it harmful?

Okay. We're aware that there are A LOT of opinions on MSG. And we love that y'all want to share them. But please remember—it's an optional ingredient. Rodney Scott calls it "Jesus' Tears" and some of us agree with him. Monosodium glutamate has a long history and a reputation that, unfortunately, isn't based strictly on facts. It's a flavor enhancer that's used in some cultures more than others, and it's also something that occurs naturally in tomatoes, aged cheeses, and mushrooms. Use it or not, that's up to you. Modern science mostly agrees that it's not harmful unless taken in large doses—pretty much like anything—although, as with all foods, some of us are more sensitive to it than others.

Spatchcocking is the BEST! The step to spatchcock this chicken resulted in a beautifully, evenly cooked bird. That’s always the trouble with whole chickens—drying out the breasts to get the dark meat to temp. Not with this technique, the chicken was super, chin dripping, juicy throughout. The low and slow method for Rodney Scott’s whole bbq chicken made for a beautifully crispy chicken skin on the outside—much appreciated.

The rib rub was so fragrant, my kitchen smelled like BBQ for a while after I took the chicken outside, loved it. And I don’t know who Rodney is, but I love his sauce. It’s a super-thin, tangy, spicy, and sweet combo that plays perfectly with the rib rub. This chicken cooks for a while, so you need to make time to be around, but the hands-on time is pretty minimal. It’s definitely worth the time and effort. 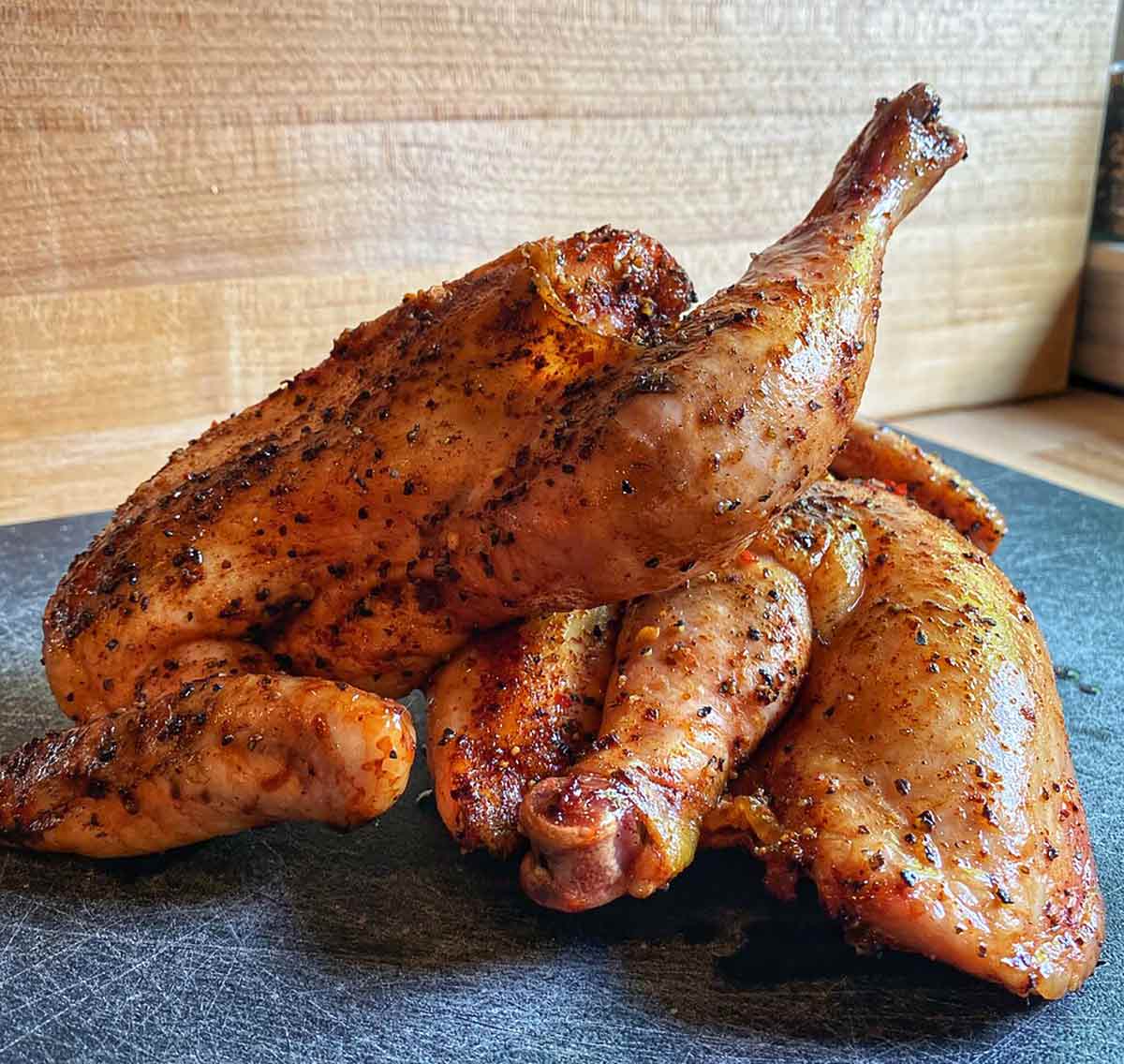 Stop whatever you're doing and make this recipe for Rodney Scott’s whole bbq chicken. I grew up just north of Memphis - I was weaned on BBQ, now live in a land where everybody with a grill thinks he's a pitmaster. Sorry fellas, Rodney is the real thing. This chicken is perfect, beautifully browned, and really not that difficult to execute, despite a three-part recipe. I made the rub and the sauce the night before we were going to cook, sprinkled the spatchcocked and split chickens with the rub early the next morning, and covered them to come to room temperature about an hour before we wanted to start the grill.

We happen to have a Big Chief smoker that we use largely for fish and sausage, but decided to see if the smoke from a couple of pans of wood chips (apple) would infuse the chicken with pit quality flavor. It worked. We left the chicken on the smoker for approximately an hour before transferring it to our PK charcoal grill to finish cooking at about 225-250°F for close to two hours, mopping with the sauce every 30 minutes or so.

Now about that sauce - it's truly a mop, not a table sauce. I put a bottle of commercial BBQ sauce out, but nobody used it, the chicken is moist and so flavorful it would have been a travesty to cover it up. I also used the sauce/mop recipe in Rodney Scott's book, cut to a quarter recipe, rather than the one on our tester's site. Ingredients are the same, just the proportions of spices are different, and I honestly didn't notice until I sat down to write this review. The recipe in the book is a bit spicier and sweeter, but it wasn't excessively hot and the increased sugar didn't burn on the surface. Our guests said this was the best chicken they'd ever eaten (yes, we served something we'd never made to other people). I'd agree, the recipe made us look like rock stars. Can't wait to make it again.

Served with twice baked potatoes, coleslaw, broccoli in vinaigrette, and local sweet corn on the cob. Key lime pie from the Good Book of Southern Baking by Kelly Fields (it's to die for, and serves a bunch), and the peanut butter goober bars from the site. I intended to peel & slice some homegrown tomatoes, but never got around to it, just sent some home with our guests. I also think the potato salad in Rodney's book would be a great accompaniment to the chicken. I've made it and it's really good, REALLY good. Excuse me, I'm off to dig a pit for my whole hog now.