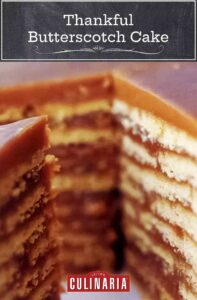 Thankful butterscotch cake starts with 10 layers of tender cake that have been flavored with rum, vanilla, and nutmeg. All of those layers get stacked up with a rich butterscotch icing in between each, and then the whole thing gets covered in more butterscotch. It’s sweet and extravagant and showstopping.

Most people think of leftovers as being confined to savory offerings, but this cake will last forever. It’s a very adult dessert, as it includes a quantity of rum that doesn’t get cooked out, and it’s so rich that very thin slices are the way to go. If you store it in the refrigerator and can restrain yourself, you can snack on it for up to two weeks. But beware, you might not be able to resist.–Bill Telepan

What can I do if I have overcooked butterscotch icing?

There’s not much you can do. Taste it–if it has a hint of burned bitterness, you’re just going to have to start over. When making butterscotch, it can go from nearly there to burned in a heartbeat. Telepan’s suggestion to pour the hot icing into a separate saucepan is brilliant because it will cool it down fast and stop the cooking process. Using a candy thermometer is also a great way to ensure that you know when you’re reaching the danger zone.

How long will this cake last?

Bill Telepan asserts that this cake will easily last up to two weeks, if stored in the fridge. We suggest that you store it in an airtight container and just keep sneaking little slices until it’s all gone.

Can I make this cake ahead of time?

Seeing as how it lasts for nearly two weeks, you definitely can. You can also make all those layers ahead of time, stack them with those sheets of parchment in between, and wrap them tightly in plastic wrap. 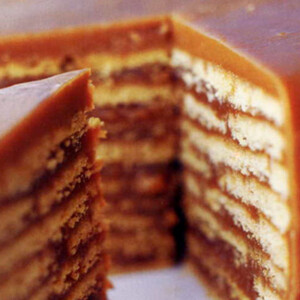 Thankful butterscotch cake starts with 10 layers of tender cake that have been flavored with rum, vanilla, and nutmeg. All of those layers get stacked up with a rich butterscotch icing in between each, and then the whole thing gets covered in more butterscotch. It's sweet and extravagant and showstopping.
Prep 1 hr 30 mins
Cook 30 mins
Total 2 hrs
Dessert
American
16 to 20 servings
701 kcal
5 / 8 votes
Print Recipe 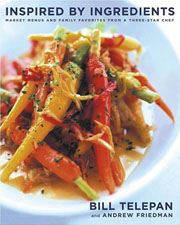 For the butterscotch icing

Make no mistake, this thankful butterscotch cake is an adult cake with plenty of rum and plenty of flavor. As the cake sits, the rum gets more absorbed, making this a moist, sweet cake. If you like the taste of dark rum and want a sweet dessert, this is for you.

The cake is time-consuming to make. It took me 2 hours to get everything mixed, baked, and iced, and then it needed to sit in the refrigerator for 1 hour before I could trim it and put the final glaze on it, which took another 10 minutes. I made the cake batter and started the baking before doing the icing as it saved some time. I used three 8-inch springform pans. Springforms are not necessary, but it made getting the thin layers out of the pan very easy. I baked each cake for 16 minutes, baking 3 at a time.

I had just enough icing to cover the top and sides of the cake. It took some coaxing to get this done, but I wouldn’t have wanted more icing on it.

When I looked at the picture and looked at each of my individual thin layers, I thought that my cake could not possibly look like the picture. By the time I stacked and iced each layer, let it sit in the refrigerator for an hour, then trimmed off 1/4 inch edge and put the final glaze on, it looked exactly like the picture! What a great transformation!

This thankful butterscotch cake is a stunning special occasion cake that wows with its towering tender cake layers, rich butterscotch, and a touch of earthy mellow rum. Slicing into all those wondrous layers is a showstopper and the first bite makes every kitchen moment oh-so worth it. It’s definitely a cake to be thankful for.

I started off with a 3-litre pot when making the icing but decided when it reached boiling that it wasn’t going to be tall enough. I then used an 8-litre pot to ensure it didn’t boil over while reaching temperature. I then boiled it until the mixture reached 242°F, which took about 20 minutes.

I poured the mixture back into the original pot and added the rum and vanilla. It did steam up but not too much. The mixture was thick and pourable.

I only have two 8-inch cake pans so it took a bit longer to bake all the layers. My first layers were slightly thicker. My heaping cups were a bit too much at first. My final layer ended being much thinner.

I did find the cake and butterscotch quite sweet on baking day but when the cake was served the following day the flavors and sweetness seemed to have mellowed and the rum was a bit more forward. I served it with strong coffee but an espresso or black tea would be nice as well.