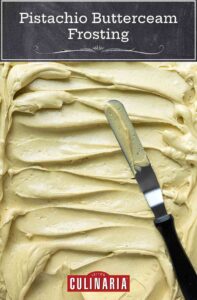 This pistachio buttercream frosting is a snap to make–it takes 30 minutes flat. (That’s about 26 hours less than it used to take David.) And its flavor? It’s exquisitely delicate, lightly nutty, and pleasantly addictive, all thanks to the addition of pistachio butter.

I can’t get enough pistachios. I love them in salads, crackers, ice cream, gelato, cakes, cookies, you name it. And frosting? Well, jump back and get out of town. There’s nothing better than pistachio buttercream frosting. I’ve been making it, in one form or another, for at least 20 years.

But in the old days–oy!–was it a pain in the ass. I’d have to shell pounds of pistachios, which left my fingers ragged. Then into a pot of boiling water they went to blanch. Next, I painstakingly rubbed the skins off each and every last little sucker and then dried them in a low oven. Next, I ground then soaked the nuts in heavy cream to infuse. That was just day one!

The following day I twisted and twisted white kitchen towels full of nuts to milk as much of the pistachio cream as possible. Then there was whipping and blending and blending and whipping. All for my love of pistachio. When it was smoothed on a White Chocolate Whisper Cake, it was simply divine. Damn it! DIVINE, I say. And it became one of my most requested cakes. But because it took so long to make, it also became one of my scarcest. And for good reason: I think child labor in the 19th century was less punishing than making this frosting.

That was until I discovered pistachio butter (AKA paste). I prefer the one from The Pistachio Factory (Click here and use the code LCNUTS to get a 10% discount). All I have to do is drop 1/3 cup into the frosting and badda bing, badda boom–it’s done. In all, it takes 30 minutes from start to finish. Heck, you can do that while the cake is baking. You gotta love progress. 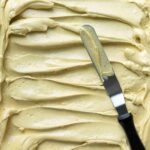 Classic French buttercream calls for egg yolks, butter, and granulated sugar to be heated to the softball stage (~240°F/115°C) to make a silky, not toothachingly sweet frosting that some folks say tastes like custard. I say it’s like angels are dancing on your tongue.

What’s the difference between Italian, Swiss, and French Buttercream?

It’s all about the egg. Both Italian and Swiss meringue buttercreams are made from a base of meringue. They call for egg whites, sugar, and butter to be whipped until very light, creamy, and smooth. (Italian buttercream uses a sugar syrup, while Swiss buttercream heats the egg whites and sugar over a simmering pot of water.) They’re both superb for frosting and piping. French buttercream, on the other hand, calls for egg yolks to be whipped with a sugar syrup and butter to create the aforementioned delight that also frosts and pipes superbly. Because French buttercream is made with yolks, the color is a soothing shade of yellow. If you’re looking for pure-white frosting, go with either Italian or Swiss buttercream.

Can I freeze French buttercream frosting?

Absolutely, 100%. You can freeze it for up to 3 months. You’ll want to make sure it’s in an airtight container with plastic wrap pressed against its surface. When it’s time to use it, place it in the fridge overnight to thaw. Before frosting with it, make sure to whip it to fresh buttercream consistency.

The pistachio buttercream frosting steps are complex and a bit intimidating. Don’t be dismayed by the large amount of rich ingredients or making a hot sugar syrup. Everything comes together beautifully, resulting in a velvety smooth and balanced tasting frosting.

I chilled the frosting for an additional 5 minutes after the initial mixing and then re-mixed it again and it spread and smoothed out like a dream. Adding pistachio paste to the yolk mixture gave the flavor a savory depth, with tiny little flecks of contrasting dark brown. The combined colors of the pistachio paste and yolks make for a natural yellow color.

It’s worth searching out the unsalted pistachio butter and making this version of French buttercream–if you only make it once–because it’s divine and the frosting is easier to make than you think it might be. This pistachio buttercream frosting is the perfect frosting for a special occasion cake, or any day, in my house.