Lemon chess pie takes the basic, beloved Southern chess pie and perks it up with a little bit of lemon juice. And with very few other ingredients, it comes together quickly and easily.

You know a pie recipe is old when several stories are told about its history. Some say the term “chess pie” goes back to an eighteenth-century English cheese pie. Another links the origins of the name to the Southern pie chest, or pie safe, a piece of furniture that holds kitchen confections. Another anecdote tells of a man who stopped to eat at a diner in Alabama. He loved the pie he was served, and when he asked what its name was, the waitress replied, “jes pie.” Whatever the truth may be, as food writer Stephanie Anderson Witmer says, “So many Southern pies, like the chess pies, are elegant in their simplicity. They use staple ingredients, but are divine.”–Mollie Cox Bryan

Given that this pleasantly homey dessert comes together from pantry staples, it’s perfect for any afternoon or last-minute occasion. 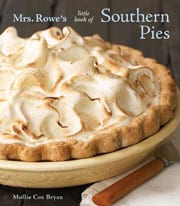 Rolling down hills, catching lightning bugs in jars, running barefoot in the grass, and the smell of pies cooling on the windowsill—eating this pie grants me flashbacks of more innocent times. If you have lemons, you most likely have everything you need in your kitchen to make this pie. It takes very little prep time to assemble and, though a frozen pie crust will cut back even more on prep, making the crust from scratch is so much tastier (I’ve tried this pie both ways). TIPS: I’d definitely recommend par-baking the crust as suggested, as the bottom of the pie won’t crisp up after you fill it. If you can wait the hour or so to let the pie set properly, you’ll be happily rewarded with a sweet-tart slice of memories.

I’ve never had chess pie, so I wasn’t sure what a Lemon Chess Pie would taste like. Turns out it’s like lemon meringue, though with a lightly crispy top of cornmeal in lieu of the meringue. I used Trader Joe’s frozen pie crust and didn’t par-bake it like the recipe suggests, and it still was nice and crisp. I let the pie bake for 45 minutes, because at 40 minutes it was still a little too jiggly. Though it’s a struggle to let the pie cool for an hour, it’s a necessary step for the filling to set up. Overall, this is one of the easiest pies to get into the oven—especially if you have pie dough ready to go. A dollop of whipped cream balances the sweet-tart lemon filling perfectly (ice cream would be too much). Now I’m curious to see how a plain chess pie would turn out.

This pie definitely brought back childhood memories of growing up in the South! It had that divinely sweet tang, and that signature slight crust on top of the filling that somewhat sticks to your fork. The directions for the crust and filling were easy to follow. I didn’t prebake the crust, and it browned beautifully even when the filling was in it. I’ll be making this again.

This was a very simple pie to make. The crust didn’t require a food processor or extensive ingredients, and the filling couldn’t have been easier—basically just whisking it all together. I par-baked the crust for 10 minutes, which ensured it was crisp throughout. The pie came out of the oven bubbly and golden, and when my family tried it a couple of hours later, they inhaled it. Buttery, lemony, and custardy, this simple pie is much more than the sum of its parts.

When I followed my mother’s footsteps to attend college in the South, she regaled me with tales of chess pie—something I’d never even heard of at the time. She waxed so nostalgic about them that I carried two home on the plane for her at Thanksgiving. So when I saw this recipe, I thought I’d give it a try. As desserts go, it couldn’t be much simpler—it’s essentially a pie crust filled with lemon curd, although the addition of a bit of cornmeal changes the taste and texture a bit. My pie didn’t come out photo-worthy, but it was delicious. Everyone wolfed it down and asked for seconds. Friends who stopped by during tasting were equally enthralled. One implored her pie-hating son to try it: “It’s just a big plate of ooey, gooey deliciousness,” she told him. And she was right. She also declared it a perfect pie for someone who doesn’t like too much crust. I rolled the crust fairly thin, trimming the edges rather than rolling them under, so excess crust was minimal. Unfortunately, that also may have been why the filling poured over the edge and spilled between the crust and the pan. This made for some brown spots and a not-so-pretty pie; but it didn’t hurt the flavor at all. We’ll definitely have this pie again. Soon.

With just five ingredients taking a minute or so to mix together, this pie couldn’t have been easier. It was just lemony enough without being puckery, with a crisp crust—a perfect foil to the slightly softer filling. I expected a problem with the eggs since the recipe didn’t call for mixing them together before adding to the sugar and butter, but the filling came together easily. I love chess pies, and this was a hit with my testers, so this will certainly go into my recipe file.

I loved this pie—it was tart, yet sweet, with a flaky crust. Yummy and company-worthy! This was very easy to make, and all of the ingredients were already in my pantry—an added plus. I’ll certainly make this again.