These twice-baked potatoes with Irish Cheddar are filled with half and half, sour cream, Cheddar, and Parmigiano-Reggiano, making them rich, creamy, and completely irresistible.

Of the many, many reasons why we swoon to these twice-baked potatoes with Irish Cheddar,  one stands out. The fact that they call for Irish Cheddar has quite a lot to do with it. For those unfamiliar with its subtle charms, Irish Cheddar tends to be less tangy than the Cheddar made elsewhere, with faintly sweet notes and, according to Murray’s, one of Manhattan’s finest purveyors of cheese, an “unusually sweet and fruited flavor.” It’s a subtle sweetness that also boasts a little nuttiness as well, sort of like your favorite spinster aunt.–Renee Schettler Rossi

The Kitchn loves our baked potatoes

Jesse Szewczyk, food stylist, cookbook author, and contributor to the Kitchn made the potatoes, and this is what he had to say.

“This recipe was absolutely delicious and proof that a simple recipe can be elevated with quality ingredients. The Irish cheddar combined with the Parmesan gave these potatoes a bold savoriness, elevating them from a simple side dish to something special.

“The combination of half-and-half and sour cream added a rich dairy flavor and velvety texture that made them feel decadent. I also loved the addition of scallions. It added a pop of freshness that helped liven up the filling and prevent it from being overly rich.” 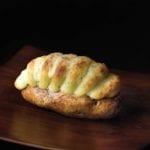 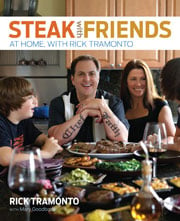 How To Freeze These Twice-Baked Potatoes

One of our recipe testers, Kim Venglar, always has twice-baked potatoes in my freezer ready to cook. So we asked her advice. After you stuff the spuds but before you bake them a second time, she says, toss the stuffed spuds in a resealable plastic bag and freeze ’em for up to 3 months. You can either defrost the potatoes overnight in the fridge and then bake them at 350°F (176°C) for 45 minutes or so, or you can bake them straight from the freezer at 350°F (176°C) for an hour or so, covering them with foil for the first 45 minutes. Potatoes, pronto! Oh, and be sure to omit the green onions, Kim notes, as “they do really nasty things in the freezer and give the potatoes a funky flavor.” Yikes. We certainly don’t want that! Instead, she says, sprinkle sliced scallions over the potatoes after taking them out of the oven.

This was a real family favorite. Following the recipe was easy and the results were very tasty. The family is already making plans for the next time.

I had 100 grams (I’d guess close to four ounces) of actual Irish Cheddar that made about two cups of shredded cheese. I used an entire bunch of chives, since I couldn’t get to the store for scallions. The filling was a little “rustic,” but no one minded. (This probably had more to do with me than the recipe itself.) This is perfect for weekend cooking due to the long cooking times.

I will certainly do this one again, with maybe different cheeses or plain Greek yogurt for the sour cream.

I love Irish Cheddar so I couldn’t wait to try these potatoes. Irish Cheddar is different from American Cheddar. It has a different texture and flavor. I used Kerrygold Irish Dubliner cheese because it’s my favorite. The recipe is very simple and straightforward, but get your mise en place ready while your potatoes are cooking.

I think the dish could have used a little more onion, but that’s a personal preference. My potatoes were just under 1 pound each. You may need to adjust the amount of half-and-half if your potatoes are large. The recipe says it serves four, but none of us could eat more than a half so I would say it serves eight.

This is a simple, delicious, and handsome dish!

Depending on how big the potatoes are, this could feed twice as many as it indicates, with each person having one half of a potato. The ones I used were gigantic, and half of a potato along with a fresh green salad made a wonderful, easy, delicious dinner. Besides being easy, this recipe is almost intuitive. You can’t get it wrong!

Feeling busy? Looking for something richly satisfying? Need a recipe that can be prepared in advance and finished with little effort the next day? Seeking a vegetarian entrée that’s tasty, filling, and visually appealing? Look no further than these twice-baked potatoes.

I used potatoes that were large—nearly a pound each. Because these were served as an entrée, each diner did, in fact, eat both halves of their potato, with not a leftover peel in sight at meal’s end. My large potatoes took an hour and five minutes to bake to fork-tenderness. Because the cheese, half-and-half, and butter combination seemed plenty rich, I subbed Greek yogurt for the sour cream with no discernible loss of richness or flavor.

I had covered and refrigerated the assembled potatoes overnight, and this extended my baking time to a full 50 minutes. I did not top with sour cream before serving, but I did top them with scallions. I found that the one tablespoon specified was too skimpy for the potatoes, so I quickly sliced up more. The Irish Cheddar is delicious, but I grated up the full 7 ounces and was left with nearly 2 cups extra cheese. It surely won’t go to waste, but I needn’t have grated up the whole chunk of cheese for this recipe.

I used leftover refrigerated baked potatoes from the night before and this recipe transformed them into getting ooohs and aaahs at the dinner table.

I used the measurements and ingredients as a guide rather than a precise measurement. Since my potatoes were cold, I scooped out the flesh and added it to the warmed milk, Cheddar and Parmesan cheeses, butter, and sour cream mixture to heat the potato through a bit for ease of mashing. I then proceeded to mash the warm ingredients to a smooth consistency and stuff them into the skins. These browned up beautifully and the end result left my diners wanting more!