Spicy pepita brittle is a fabulous combination of sweet, salty, and spicy. And crunchy—don’t forget crunchy. Making caramel doesn’t have to be intimidating, and brittle this repeat-worthy means you’ll be a pro in no time.

There are few things more tempting than a dish of fancy candies. But here’s a little secret—it’s actually quite easy to make these sugary confections at home! Spicy pepita brittle is a festive treat for the holidays and perfect for giving. For the ultimate in simple indulgence, there’s nothing sweeter than making your own treats.—Charity Ferreira

The warmer and more humid your climate, the quicker that brittle is going to get sticky. The best way to keep it fresh and dry is to separate layers with parchment and keep it in an airtight container. It only needs to be refrigerated if, again, you live in a hot, humid climate.

Do I need to add corn syrup to spicy pepita brittle?

Even just a couple of tablespoons of corn syrup keeps your brittle smooth and helps to stop the sugar from crystallizing. Caramel can be intimidating because it burns easily, but also any unmelted sugar will cause grittiness. The addition of water aids in dissolving the sugar granules and corn syrup will keep the brittle from getting grainy as the melted sugar cools.

How do I know when my caramel is ready?

We love to suggest that you invest in a candy thermometer because they really, really help. But learning the stages of caramelization also helps. You want to cook that caramel until it’s the color of an old penny but before it starts to give off any burned smell. If you’re relying on color alone, cook the caramel at a lower temperature to you give yourself a bit of a cushion with the timing. 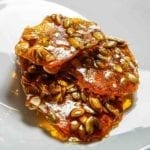 This is a beautiful, unusual brittle that combines only a few ingredients but tastes incredible. Sweet with a surprise of heat and the salty crunch of pepitas, it's one of my favorite brittle combinations. It makes a cute little gift, too.
Prep 15 mins
Cook 10 mins
Total 25 mins
Dessert
American
9 servings
401 kcal
5 / 2 votes
Print Recipe 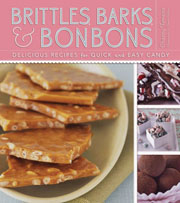 Just like so many other brittles, this one is addictive! Especially if you love heat in your food. If you’re a heat-lover, for sure go with a full 2 teaspoons of cayenne. If your tolerance is somewhere lower on the Scoville scale, adjust accordingly. I think 1 teaspoon would still give you the heat you love, but not in a tongue-scalding way. An easy and quick snack. Try experimenting with other seeds and/or nuts, e.g. sunflower seeds, chopped almonds, pine nuts, etc.

This recipe was a surprise. I wondered whether I would like it (I generally like brittles), but I’ve never added anything spicy to my brittles. I always stick with cashews and peanuts but I love the idea of pepitas. I used roasted pepitas.

It had been quite a while since I had made any candy whatsoever, so I wondered about the accuracy of my candy thermometer since it had been sitting in a drawer for probably a year or more without being used. It turned right on, so I decided to give it a go without changing the battery, which would have required a trip to the store. As a backup, I had a meat thermometer.

I followed the recipe exactly, except I like “hot,” so I added a full 2 teaspoons of cayenne (the recipe called for 1 1/2 to 2 teaspoons). At a 6 on my electric stove, it took 5 minutes to dissolve the sugar, water, and corn syrup. That timing was accurate to the written instructions. I increased the heat to 8 and let the candy do its thing. It took 14 minutes for my candy thermometer to read the 335℉ (the recipe said 10-15 minutes). I tested it with my meat thermometer and it read 327℉. Oh, what to do now? I let my meat thermometer go up to 332℉ (it is a newer thermometer). By this time, my candy thermometer was up to 341℉.

I decided I better remove the candy from the heat and stir in the pepitas and cayenne/salt mixture. None of the kernels popped but the mixture did bubble up. I quickly poured it out into my buttered jelly-roll pan. One edge got kind of sugary with the pepita sugar mixture that was stuck to my rubber spatula. I spread the mixture into a thin layer that took up most of the pan.

About 45 minutes later, I decided to try the candy. The one small edge was still sugary and slightly whitish, but the rest had turned into a beautiful brittle. It came out of the pan easily and I broke it into little chunks. It broke easily and wasn’t sticky. I think I timed it just perfectly. I loved the recipe. The heat from the cayenne paired perfectly with the sugar and gave you an “after heat.” I won’t be taking this recipe to share anywhere. It’s staying all home with me.