Early summer brings out the little kid in me. Which is to say, the see it, want it, gotta have it tendencies in me.

It happens without fail, each year. After a seeming eternity of stone-fruit deprivation, I turn all moony-eyed at the greenmarket when crates of peaches once again make an appearance. I become so wooed, I’m embarrassed to admit, that even when I reach out and realize that the peaches are unyielding—not just a-little-shy-of-ripe hard but inconceivably, frustratingly, impossibly un-peach-pie-ably hard—I still can’t resist the siren call. Without fail, I proceed to heap those fuzzy little orbs into my waiting arms.

Buoyed by my sanguine mood, I place the peaches on the counter. And wait. For the first day or two I’m as giddy as a high school freshman with a senior crush, casting the object of my affection furtive glances. The second day, after they’ve softened ever so slightly, I’m gratified, relieved even. My overconfidence is quickly dashed, replaced by disbelief as the peaches slowly start to shrivel without softening or sweetening up. And so there they sit. Peaches that stubbornly refuse to ripen. Peaches that defy the very notion of ripeness, of peachiness. Peaches whose very presence mocks me. Denial. Relief. Disbelief. Disappointment. I know them well.

Each summer I do my penance for this little greenmarket gaffe, which I confess happens not just with peaches, but with plums as well as cherries, which cost me dearly at half a paycheck a pound. After being yanked countless times from my reverie and left to deal with the pile of stone-hard stone fruits that inhabit my kitchen, I’ve come to terms with a few things.

Throwing sugar at the problem works a certain magic, but only with slightly underripe stone fruits. Getting the fruit a little tipsy also works quite nicely, although this is best reserved for the more forgiving texture and less elusive sweetness of unripe cherries and plums—just toss them into a saucepan with sugar, some spice, and a hefty splash of booze, then let it gently burble and guggle until a heady, not-too-syrupy compote cloaks your problem. A scoop of gelato makes most guests all the more forgiving of the situation.

These tactics, sadly, will take you only so far with hard peaches, which is to say, not very far at all. These belligerent specimens detract and disappoint when used in anything that a reasonably ripe peach would ordinarily endow with sweet pleasure, whether pie or jam or crostata or crumble or standing at the kitchen sink. Trust me. I’ve had quite a lot of practice with this one. And may god help you if you try to sneak them into sangria.

I eventually came to the understanding that trying to turn stone-hard stone fruits into something they’re not is futile. Embracing what they are required far less effort, not to mention less disappointment. An underripe peach actually possesses a pleasing tartness and crisp crunch, which aren’t as intractable as they first seem. Although the taste and texture may not be remotely like what one has come to expect, I’ve come to flaunt what I once mistook as a seeming flaw. The result, at least lately, has been a simple, slightly sweet peach slaw. After all, I defy you to julienne a perfectly ripe peach. But an unripe one? See for yourself.

Adapted from Michel Richard | The Chefs of the Times | St. Martin’s Press, 2014

A perfectly ripe peach has its charms. But one that’s stubbornly slow to ripen? Even it has its own enticements, evidenced by this unconventional and sassy slaw that bathes tart, crunchy peaches in slightly sweetened yogurt spiked with ginger. It’s adapted from a recipe dreamt up by chef Michel Richard of Citronelle in Washington, D.C. You’ll never curse unripe peaches again.–Michel Richard

LC Oh Woe Are We Note

We know we’re not alone in having experienced the sorrow of a slew of unripe fruit. So tell us, what did you do? Let us know in a comment below. 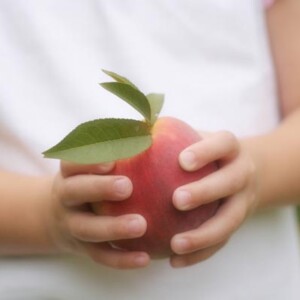 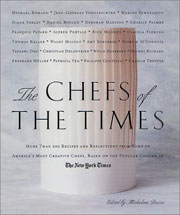 An easy recipe for summer to use any recalcitrant peaches that refuse to ripen.

Though the recipe’s notes suggest serving this alongside grilled pork or chicken, I served it alongside brunch—and the yogurt/ginger/pepper complemented nicely the sweetness of a rich, cheesy, baked blintz. I think the name is a bit of a misnomer, as even my hardest peaches in the bunch macerated and softened during the refrigeration time. This created something more akin to a raita with the combination of yogurt and salty/sweet/spicy.

Maybe I’m sort of weird for liking hard, underripe peaches to begin with, but this salad was enjoyable to me. It’d be good with underripe nectarines as well, or even jicama. The ginger with the peaches was a delicious combination, one that really caught my attention and held it. I loved the crunch. This would make a great company salad, as it’s slightly different, fast to prepare and extremely simple.

This peachy slaw is an interesting alternative to the regular vegetable side-dish fare. It’s embarrassingly easy to make, and requires no cooking skills whatsoever. The amount of ginger called for in the recipe provides just the right balance to elevate the slaw from ho-hum into yum-yum. I’ll make it again for sure as long as there’s ginger to be had. It’s a healthy, out-of-the-ordinary and fresh alternative to everyday side dishes.