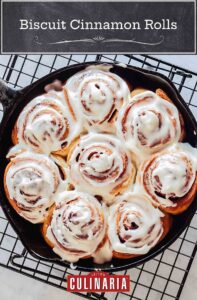 These biscuit cinnamon rolls are quick and easy, laced with spice, and lavished with buttermilk cream cheese icing. A shortcut recipe when you want the taste of homemade cinnamon buns but don’t have the time—or the yeast.

If we were the poetic sort of home cook, we’d pen a long, meandering ode out of respect for the indulgence these biscuit cinnamon rolls bring to even lazy weekend mornings. We’re not poets, though, so we’re simply going to reassure you that these little lovelies are quick, easy, gooey, sticky, sweet, and certain to please. And they’re relatively instant gratification compared to their more classic yeast-raised counterparts. Do with this information what you will.–David Leite

Tester Bonnie D. loved that these were “a quick and easy alternative to the traditional cinnamon roll,” while tester Greg C. was delighted that the finished rolls were “soft and chewy” with plenty of crispy, caramelized edges.

Can I add raisins or nuts to the biscuits?

What should I serve with these?

For a lighter meal, serve these cinnamon roll biscuits with fresh fruit and coffee or tea. For a larger meal, they’re great alongside fluffy scrambled eggs and crispy bacon.

How do I make homemade buttermilk?

If you don’t have any buttermilk on hand, for this recipe, measure 1 tablespoon plus 1 teaspoon of lemon juice into a liquid measuring cup. Add enough milk to make 1 1/4 cups. Stir and let sit for 5 minutes before using. 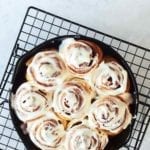 These biscuit cinnamon rolls are quick and easy, laced with spice, and lavished with buttermilk cream cheese icing. A shortcut recipe when you want the taste of homemade buns but don’t have the time—or the yeast.
Prep 40 mins
Cook 30 mins
Total 1 hr 10 mins
Breakfast
American
8 rolls
455 kcal
5 / 3 votes
Print Recipe 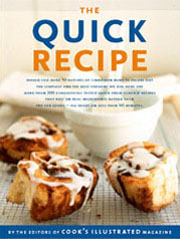 For the biscuit cinnamon rolls

A quick and easy alternative to the traditional cinnamon roll—perfect for when you want the taste but don’t have the time. The biscuits were moist and tender, and the filling had just the right combination of cinnamon and cloves for a delightful taste.

This biscuit cinnamon rolls recipe produced surprisingly good results. I don’t make a lot of cinnamon rolls because they’re always best the first day and, unless you’re getting out of bed at 4 am on a Saturday, how is one going to realistically make that happen on a weekend? Enter this recipe!

These biscuit cinnamon rolls were really easy to put together and produced a nice result. The icing was delicious and had a good balance of sweet and tangy–I think the addition of the cream cheese is a must. It didn’t quite have that soft, spongy texture that cinnamon rolls that have been allowed to rise have, but these are still very good for a 30-minute process.

The process was really easy to follow and, while it’s a minor thing, I really liked that you melt the whole stick of butter and then portion it out over the course of the recipe. I had roughly a third too much filling.

I was skeptical about being able to “whisk” a couple tablespoons of cream cheese into the buttermilk and powdered sugar but it all worked out ok. I probably would have used my stand mixer if it hadn’t explicitly said to whisk but it was nice that the whole recipe came together with a bowl and wooden spoon.

There were a couple of these leftover the next day and (in the name of science!) I tried one to see how they’d held up overnight in the fridge. A quick 20 seconds in the microwave and it really came back to life and had a nice texture.

For servings, due to user error (and maybe an inability to count), I ended up with 9 cinnamon rolls, after trimming 1/4 inch off each end to make them more uniform. It did make them fit together a little nicer in my 9-inch cake pan.

I was extremely skeptical that a non-yeast cinnamon roll dough would do justice to this incredible pastry. While it was a bit of a challenge to work with (not that yeast doughs sometimes aren’t), wow, the results were spectacular. I really loved baking them in a round pan because there were lots of edges with that brown, crisp, sweet je ne sais quoi.

These cinnamon rolls were soft and chewy, just the way they’re supposed to be.

The icing was really good but I prefer a more cream-cheesy version. The only trouble I had, and it probably was because the dough was a bit sticky, was that my roll wasn’t very tight, so when the rolls expanded in the oven, there were some gaps, which meant the filling kind of sank to the bottom. But there it caramelized, so it was all good.

A traditionalist, I’m not likely to make this recipe my new go-to cinnamon roll, but it will sure be nice having it in my back pocket for that spur-of-the-moment, “Hey, let’s have cinnamon rolls for breakfast today!”

It took a couple of minutes to get the wet ingredients incorporated into the dry and I needed to sprinkle the dough with a little additional flour. Also, I needed a constant coating of flour on my mat.

I thought the flipping onto a plate then onto a cooling rack would be complicated (fearing the rolls wouldn’t come out of the pan) but it was not at all. The instructions were clear.

I will preface this by saying if you’re wanting a sweet, gooey biscuit that goes together quickly, then this recipe a 10. It’s great warm out of the oven and the next day it was still quite good, soft and tasty.

It’s not to be compared with a yeast cinnamon roll. But it’s a good one to add to your recipe box of quick biscuits.

Be sure you don’t put parchment in your pan thinking it will be a quick release of goo on the bottom because if your pan is nonstick, it will plop right out. The oven does need to be 425°F. I did my biscuit cinnamon rolls at closer to 375°F as I didn’t trust that high temperature but it’s needed to caramelize the butter and sugar filling.

I did the double plate flip to get it out of the pan and then back onto a nice plate. I drizzled the icing over and it made a nice presentation. The sugar mix filling looks like a lot and it is.

Some might consider them a bit sweet but it makes you forget you’re eating a soft biscuit. So it’s a good thing. They are big biscuits and 1/2 is sufficient with a cup of hot coffee with a plate of scrambled eggs and ham.

I loved the taste of these cinnamon rolls. They weren’t the neatest little spirals as depicted in the picture, but I forged ahead and decided to bake them regardless. They were still delicious…my husband ate the entire pan!

I’d do a test run of this recipe before trying it out for company brunch, but the results, even if you run into trouble with the dough, is scrumptious. And right out of the oven…fantastic.