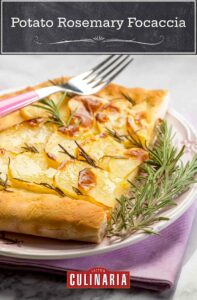 For this potato rosemary focaccia, an herb oil of basil, oregano, rosemary, garlic, and thyme is drizzled on focaccia with potato, onions, and rosemary.

This focaccia variation, which goes under the name focaccia con patate e rosmarino in Tuscany and “potato pizza” in New York City, is beginning to emerge as the most popular topping among the new generation of focaccia fanciers. It is their benchmark in much the same way that the pizza Margherita is the benchmark for pizza and the baguette is for bread. When you make it, you’ll understand why. Like many of the dough recipes in this book, it utilizes a delayed-fermentation technique, a method so perfectly suited to focaccia that I now use this recipe in place of most of the previous focaccia recipes that I’ve learned or developed.–Peter Reinhart

Like a lot of the best bread in the world, focaccia is Italian. Flatter than a loaf of bread, focaccia is pretty similar to a pizza crust in texture. The most striking feature, however, is all those dimples on the surface. They’re used to reduce air in the dough and to keep it from rising too quickly, keeping it flat and maintaining a lightweight texture. Those adorable dimples are also perfect to envelop whatever you choose to sprinkle in there–olive oil, sea salt, olives, sun-dried tomatoes, or herbs. 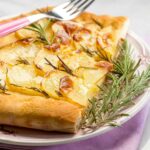 This dough recipe makes the best-tasting all-purpose focaccia dough that I've ever had and is also the easiest to make. Potato, onions, and rosemary make the focaccia base which is accented with a basil, oregano, rosemary, garlic, and thyme oil.
Prep 45 mins
Cook 55 mins
Total 18 hrs
Sides
Italian
8 servings
798 kcal
4.75 / 4 votes
Print Recipe 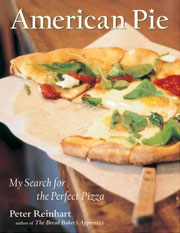 For the herb oil

This potato rosemary focaccia is a bit time intensive but was the perfect remedy for a long weekend at home during the pandemic when I really wanted to try something new that would take a little extra time to complete. The finished focaccia was olive oily, crusty, chewy, and everything that I wanted from this bread. The potatoes were lovely on top with the herbs, but one the real star for me was the optional onions. I used a yellow onion cut into very thin strips that I sort of randomly scattered over and under the potatoes. The strips turned into brown crunchy deliciousness on the finished product so I would not call them optional.

We liked this so much that we ended up pairing it with some vegetables and eating it for dinner. The quality of the olive oil is critical in this recipe – we had a lovely, fruity one that enhanced every step of this focaccia. I let the bread rise in the fridge overnight for about 12 hours before moving on to the next step and that seemed right to me. We drizzled some of the remaining herb oil over the potatoes, as listed in the recipe, but my spouse also liked to dip bits of the focaccia in the remaining oil for an occasional punch of herby flavor.

This is one of the best and easiest focaccia recipes you will ever make. The crust was perfectly baked and had a nice crunch with a very tender interior and a perfect crumb. The herbs and the potatoes make for a great topping, but this dough would lend itself to other toppings as well, such as caramelized onions, olives, sun-dried tomatoes, red and/or green bell peppers. To add a bit more flavor, be sure to use the leftover herb oil as a dip for the focaccia.

The dough will be quite sticky when you put it together and may not have enough structure to hold together. As the recipe indicates, you can add more flour to get it to the point where it holds together and passes the windowpane test. The windowpane test is one of the best ways to tell if your dough has been sufficiently kneaded for gluten development and is ready to rise by pulling a small piece of dough into a square to form a translucent membrane without breaking apart. In my “test” of this recipe, I ended up adding a little more than a half cup of flour. I think this would be unusual in most cases, but I was in Florida at the time and the humidity was quite high. Most likely my flour had a higher than normal moisture content due to the humid environment and this is something you will never know with flour and breadmaking until you actually work with the dough.

If you’re looking for a crispy-on-the-outside, pillowy-on-the-inside, delicious focaccia, this is the recipe. I can see myself going back to this dough recipe again and again. It was time-consuming, but not incredibly hands-on, and it had the most amazing texture. I felt like the herb oil, however, was too full of dried herbs, it left the potatoes covered in a ton of dried herbs that didn’t add a lot of flavor to the dish. I think maybe straining it and then adding more fresh herbs with the rosemary would be nice. The one sprig of rosemary also didn’t add enough rosemary flavor, and I was expecting more based on the recipe name. The potatoes cooked beautifully, I used thin-sliced Yukon Golds, they turned out buttery and caramelized.

It seems that these days everyone has been captured by the magic of bread making. As I see friends and family revel in their feats of creating the perfect sourdough or french loaves at home, I can’t help but notice the lack of focaccia being made. This relatively hands-off potato rosemary recipe combines the allure of bread making with a touch of pizza making to create a truly crave-able treat.

Don’t let the total time fool you, every minute for this focaccia is absolutely worth it. The combination of the airy dough with the slightly spicy herb oil (I decided to opt-in to the chili flake and hot paprika additions to the oil) and crispy potatoes on top is absolute heaven. The thinness of the potatoes doesn’t add any heaviness to the bread itself but acts as a crispy element to break down the chewiness of the bread.

If you’re looking for a great side dish to bring to a potluck or just something to snack on for a light lunch, do not skip on this recipe.