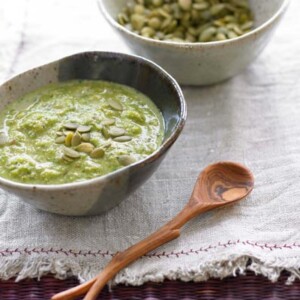 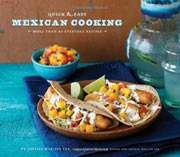 This is a well-balanced mole in terms of texture, flavor, and spice. I love the slight crunchiness from the pepitas, and the herbal notes from the cilantro, parsley, and epazote. I disagree with the active prep time of 15 minutes, but I tend to be a tad slow. Also, I used a food processor to puree the vegetables, and when I added the broth, the whole thing overflowed. Thus, I had to clean up a big mess and also estimate how much additional broth to add to make up for what was lost. In the future, I’d use a blender, or puree the solid ingredients with a small amount of the broth and then add in the rest of the broth in the pot.

Despite these quibbles, the recipe is simple to put together and versatile—highly recommended. The first night, we had the mole spooned over simple grilled chicken. The second night, I cooked shrimp in the remainder of the mole and spooned it over white rice. Both were great, but the shrimp mole and rice was sublime.