This roast pork in milk is an Italian classic known as maiale al latte. It calls for taking an inexpensive cut of pork and slowly braising it in a milk bath, which tenderizes it and creates an out-of-this-world sauce. 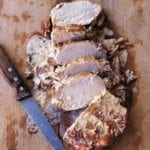 This roast pork in milk is an Italian classic known for its exquisite tenderness. While it has a short ingredient list, it turns out a gorgeously flavored dinner.
Prep 35 mins
Cook 2 hrs
Total 2 hrs 35 mins
Mains
Italian
10 servings
331 kcal
5 / 3 votes
Print Recipe 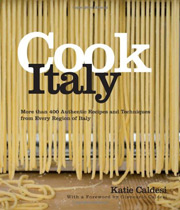 This maiale al latte was wonderful, delicious, and so surprising. This is absolutely not what I expected from braising pork in milk, nor did I expect the milk to transform into such a rich, beautiful sauce. The pork was tender, but not falling off the bone, unlike other cuts that contain more gelatin or connective tissue. What you do get is a perfectly toothsome bite of meat that is moist and flavorful, just how loin should be cooked.

Rather than whisk the sauce to incorporate the milk solids, I sieved the solids out and separated the fat into a beautifully classical demi-glace. Serve this pork and its sauce with creamy polenta. Yum!

I hadn’t made maiale al latte for quite some time, so I was excited when this recipe appeared. This dish could hardly be simpler—sear, add milk, and braise. What I enjoyed about this recipe is that the pork flavor was pronounced, as pork tends to be neutral in taste. But this method makes you feel like you really are eating pork! The recipe said to cook the pork at a low simmer for 2 hours, or until juices run clear. Well, my preference is to cook pork to slightly blush pink, and this took nearly 45 minutes longer.