This pastrami, caramelized onion, and Gruyère sandwich combines peppery meat, sweet onions, and the subtle yet essential tang of cheese in this easy, satisfying meal.

Onion rye, sliced sourdough, or challah would all be great breads for this sandwich. At Macrina, we often feature it on our pretzel knot roll, a fairly dense roll made with the addition of a little rye flour, then topped with coarse salt, poppy seeds, and sesame seeds. The combination of these flavors with the American favorite delicacy of thinly sliced peppery pastrami plus sweet caramelized onions and nutty Gruyère cheese is terrific.–Leslie Mackie

*What’s the difference between pastrami and corned beef?

There are a couple differences. Corned beef is made from brisket, which comes from the lower chest of the cow; pastrami is typically made either from a lean, wide, firm shoulder cut, or a smaller and juicier section right below the ribs, although you may occasionally see pastrami made from brisket. The biggest difference is the spices used. Corned beef is, well, naked. Aside from the flavor of the brine, it doesn’t have much else added. Pastrami, on the other hand, is coated with black pepper, coriander, mustard seeds, fennel seeds, and sometimes fresh garlic. 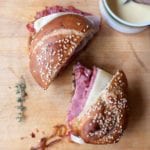 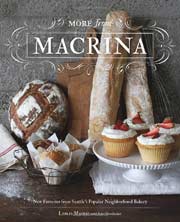 For the caramelized onions

For the mustard aioli

Each of the individual elements in this sandwich is delicious enough on its own, but together, they’re heavenly, albeit rich. I used a homemade rye bread with a nice crunchy crust and a tight crumb. I didn’t add hot pepper flakes to the caramelized onion because I wanted a purely sweet flavor. The aioli had the perfect amount of garlic—enough so you could taste it in the background but not so much that it overwhelmed the other flavors in the sandwich.

These pastrami, caramelized onion and Gruyère sandwiches were surprisingly rich because of all the strong flavors—I think you could make little mini 1- or 2-bite sandwiches as a perfect hors d’oeuvre! I’ll definitely be making these again when I’m in the mood for a decadent sandwich.

This is a yummy sandwich. We made it on good rye bread and had it for supper. The size of the bread or roll makes a difference here. Our slices of bread were on the small side so we each had two overstuffed sandwiches and enjoyed them to the last bite!

I omitted the red pepper flakes in our sandwiches for the sake of the young eaters. The caramelization of the onions was easy to do and affords the cook the time to make the mustard aioli. When everything is done you can let the aioli flavors meld a little or serve it right up. A quick dinner.

We enjoyed every part of this pastrami, caramelized onion and Gruyère sandwich for lunch. We found the pretzel knot rolls at Whole Foods and they were the perfect combination of crisp outside and soft inside. I made the onions the day before to speed up my day-of assembly. The aioli (my first attempt ever) was easy to make and came together flawlessly, and, of course, how could you go wrong with pastrami and Gruyère?

My only wish was that our pretzel rolls were slightly larger—one was a little small for lunch and yet 2 sandwiches would’ve been too much. Finally, I think these sandwiches could be made in advance and wrapped up to serve later. They’d be just as good at room temp as they are right out of the oven.

What a lovely, gooey, yummy sandwich! Gruyère, peppered pastrami, and caramelized onions make the world go around as far as this tester is concerned. I loved the bite of the pepper, the richness of the Gruyère, and the sweet onions all trying to escape the toasted onion bread I used to surround it. Then add in that wonderful mustard aioli and you really did it to me. Some people would say this is just a sandwich, but me, I say this is dinner for company.