This soft pretzels recipe are a German classic but are an easy homemade version with everyday ingredients, including beer (!), that are just like the real deal you’ll find abroad. Here’s how to make them at home.

If you’ve ever tasted real German soft pretzels, with a deep, dark, burnished skin showered with crunchy salt crystals and a yeasty, chewy middle, then you know what you’re in for here. The shape of these soft pretzels is typical of the historic German region known as Swabia, where the tradition is to shape pretzels with fat “bellies” and thinly tapered, crispy “arms” interlocking in a twisted embrace. [Editor’s Note: The author was generous enough to share several shape variations—and how-tos—with us, which you’ll find beneath the recipe.]–Andrea Slonecker

Why do some pretzel recipes call for lye?

Authentic German soft pretzels traditionally call for the dough to be dipped in a solution of food-grade lye and water before baking. Yeah, lye. It’s actually what gives the pretzels their characteristic “deep, dark, burnished skin,” according to author Andrea Slonecker. We don’t doubt that.

Still, call us scaredy-cats, but in the words of Slonecker, we just aren’t up to the challenge. And we’re okay with that. So we’re going to let that little tradition, er lie, seeing as the author, thankfully, gifted us with a comparable solution.

“The esteemed food scientist Harold McGee wrote a story for the New York Times in which he explained that the chemical properties of baking soda can be altered, causing it to behave in a similar way to lye, if it is baked in an oven at a low temperature for an hour or so.” That’s her solution. Works for us.

You’ll see that we opted for this eminently sensible alternative in our tweaked version of the recipe that follows. And those of us who have experienced German soft pretzels in their native country didn’t feel anything was missing at all. 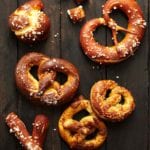 This soft pretzels recipe are a German classic but are an easy homemade version with everyday ingredients, including beer (!), that are just like the real deal you’ll find abroad. Here’s how to make them at home.
Prep 1 hr 15 mins
Cook 8 hrs 45 mins
Total 10 hrs
Snacks
German
8 servings
233 kcal
4.80 / 5 votes
Print Recipe 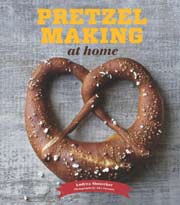 I’ve made several soft pretzel recipes over the years. I’m ALWAYS a little disappointed. This problem has now been solved. I couldn’t be any more pleased with the results. The pretzels were dark and shiny and I LOVE the use of the beer in the dough—after all, what goes better with pretzels than beer?

Allowing this dough to ferment overnight gave the pretzels a wonderful deep flavor. I used brown sugar instead of malt. I doubled the batch and made some nice pretzel buns for sandwiches. This is a GREAT recipe.

I jumped at the chance to make homemade soft pretzels. The recipe is long because it’s packed with details and cues that really help manage the process, but the actual execution is pretty fast and easy. I went with the slow fermentation and I’m glad I did. The pretzels were really tasty.

The yeast quality matures and mellows into a seasoning, for lack of a better description. I used a generous sprinkling of Maldon flaked sea salt over the top. I also used a large carving board to roll out the dough ropes. The wood texture gives the perfect traction necessary to lengthen the dough without it sticking to the surface.

I’ve made bretzeln for more than 20 years, but never had a recipe that adds beer to the dough. I had to try it. The pretzels turned out nice with a deep, mahogany color.

The instructions are very clear and elaborate. I followed them exactly, and mostly they worked very well. The only thing I had to add was 2 more tablespoons water. The dough was just too stiff. I should’ve added probably 1 more tablespoon to make the dough a bit more elastic. I let it rest in the fridge for 24 hours. I used lye (sodium hydroxide), which worked just fine. You have to thin the lye with water. I always use a 3% solution.

They were just a little bit on the soft side for me; I like them soft and chewy inside, but crisp on the outside. All things considered, it’s a nice recipe and great fun to try out. You’ll never buy pretzels again….

Many times I regret picking the long recipes to make, yet this was worth it in the end. What was most difficult for me was, well, staying on task (teenager problems) and rolling out the dough to a thin and long strip. I had my mom help me on a few steps. But for the most part I managed to get through it myself.

I used dark brown sugar instead of barley malt syrup. In terms of the steps of the recipe, first I added the warm water, then the dark brown sugar, and last topped it off with the dry yeast. I enjoyed it; I just wish I would’ve kept them in the oven for a little less time.

These pretzels are a bit of a project, but the results were worth it. The instructions are really good, and so are the pretzels! The last and only other time I tried to make pretzels, I was a teenager and the pretzels turned out soggy and leaden, and my mother never lets me forget it. In contrast, these pretzels are beautiful: brown and chewy and slightly crunchy on the outside. I used the baking soda method and didn’t have any problems.