These pot stickers, or guotie, are an Asian appetizer made with ground pork or beef, scallions, ginger, and soy sauce stuffed into dumpling wrappers, pan-fried, and served with a black vinegar-soy dipping sauce.

According to cookbook authors Nate Tate and Mary Kate Tate, the Mandarin Chinese word for “pot stickers” is guo tie, or guotie, literally “pot stick.” It’s an apt name, one the dumplings earned from their cooking method. “Chinese cooks first steam guotie in giant flat-bottomed iron pans. When all the water is absorbed by the dumplings, they’re left in the pan to crisp and stick to the pan,” explain the Tates. Gotta love literalness. And authors who hew to tradition as they translate another culture’s tastes.–Renee Schettler Rossi

When is it appropriate to serve pot stickers?

What’s that, you ask? When is an appropriate time to serve pot stickers? We honestly can’t think of a time that’s not appropriate. All manner of occasions seem apprropriate. Lunch. Dinner. Hors d’oeuvres. Oh-shit-the-kid-is-melting-down-because-he’s-hungry moments. (Trust us, kids love them for their dunkability. Heck, truth be told, so do adults.) We even reach for leftover pot stickers for breakfast, chopping and sizzling them in a skillet until crisp and warmed through before tucking them within omelets or, for the omelet-challenged, stirring them into scrambled eggs. Catch our drift? And if you’re wondering about pot sticker-appropriate utensils, chopsticks will do quite nicely. 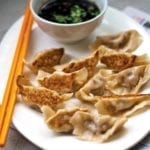 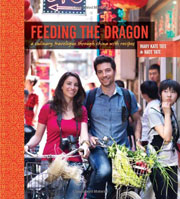 For the dipping sauce

If these pot stickers are indicative of good Chinese home cooking, I’m going to need to learn a lot more about it. These were insanely delicious and a huge hit with my entire family. And I love that you can make them ahead of time and keep them in the freezer.

I used 6 ounces each ground beef and pork. I was unable to find dumpling wrappers so I used wonton wrappers, which worked perfectly. They took 1 minute to fry and 8 minutes to steam and they were finished. The dipping sauce is a wonderful accompaniment—don’t skip it!

I’d never had pot stickers before, and for some reason I’d thought they were deep-fried. Now the name finally makes sense. I was worried about making these, wondering if the dumplings would take me much longer than the 45 minutes of hands-on time, given I had never even used dumpling wrappers before. I also worried that all my filling would spill out. But my worries were for nothing. If anything, it took me less 45 minutes to make and shape these.

I used a large nonstick pan and it only took me 2 batches to complete all the dumplings. When I removed them, they looked very browned on the bottoms, so I hoped they weren’t overcooked. They were perfect—a little crunchy brown on the bottom but not too crunchy and soft on top. The flavor of the pork filling was wonderful on its own, but it was even better with the dipping sauce. I rarely make a recipe where I wouldn’t change a thing, but this one was perfect as written. I’ll definitely make these again, and I love knowing that I can make and freeze them! So easy and so good.

Putting together the filling for these dumplings was a cinch. The filling was tasty. Being ginger lovers, we’ll use a little more the next time. And more salt. But then, “a pinch” isn’t precise, so maybe the author’s pinch was bigger. The dumplings cooked and browned perfectly.

Not having black rice vinegar, I ignored the “no substitution” rule on the sauce and made it with the rest of the ingredients and half reduced balsamic, half rice vinegar. Can’t say how it differed, but it worked well, anyhow.

This recipe takes a little while to prepare due to the time it takes to assemble the pot stickers, but it’s well worth it. The filling comes together very quickly and the dipping sauce is very easy to make and well worth what it takes to find the Chinese black vinegar. (I only found one store in my area that carried it.)

I made my pot stickers with ground beef, and the taste wasn’t quite what I expected, but I think that’s because I was expecting them to taste like the pork ones I’m used to having. Next time I’ll use pork and I’m certain this will be a 10. I did find that the instructions to pleat them were a little confusing. This recipe is a keeper.

After seeing this recipe just this morning, I was in the store and back home within a few hours to start making these yummy little treats for lunch. The filling and dipping sauce were quite simple to make.

I used store-bought dumpling wrappers, which made the assembly of these little dumplings rather easy. As this was my first attempt at making Chinese dumplings, I followed the link to how-to pictures as a guide to sealing and folding the dumplings. This recipe was a huge success and I’ll definitely be making these again. I did tweak the ingredients after my first time. I added to the meat mixture another tablespoon soy sauce, a splash sherry vinegar, and a pinch white pepper for some extra spice. I actually made 2 batches—one with ground pork, the other with ground chicken.

The thing that took me the longest time was finding black vinegar…I actually gave up and made my own version of a dipping sauce. Yes, I stirred with a chopstick in one direction and unless that has something to do with the kitchen gods, I am not sure why a spoon would yield any different results. I used ground beef and store-bought dumpling wrappers.

I froze some leftovers and cooked them successfully from the frozen state the next day and they cooked up beautifully. I am determined to find black vinegar and give this dipping sauce a try next time. Make a lot of these. They taste great and will disappear quickly!