Here’s how to make Southern fried chicken wings battered with a mixture of flour, paprika, Parmesan, and milk and fried until crisp. As easy to make as it is to crave. Well, almost.

James Villas understands Southerners. And he definitely understands Southern fried chicken wings. He states in his books that his Southern compatriots know that the sweetest part are the chicken wings. (But then why did God give chickens just two wings? Chew on that when you’re munching on these lovelies.) He also says of chicken wings, “And nothing is relished more at cocktail parties” than a platter of crisp fried wings intended to be eaten with one’s fingers. Amen to that.–David Leite

How can you tell the difference between chicken wings and chicken drumettes?

When author James Villas refers to “chicken wings,” what he’s actually referring to are the “drumettes” of the wings. You know, those meaty miniature drumsticks that everyone snatches first from the platter of mixed chicken wings and drumettes. Of course, this recipe works on the scrawny two-boned chicken wing portion of the wing, too. It also works just dandy on regular pieces of chicken—simply increase the time the chicken is in the oil by several minutes. 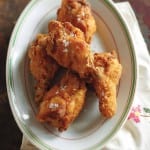 Here’s how to make Southern fried chicken wings battered with a mixture of flour, paprika, Parmesan, and milk and fried until crisp. As easy to make as it is to crave. Well, almost.
Prep 45 mins
Cook 15 mins
Total 1 hr
Appetizers
Southern
4 to 5 servings
325 kcal
4.72 / 7 votes
Print Recipe 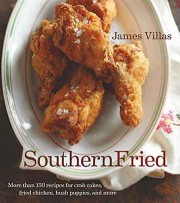 Sometimes a recipe is just meant to be. My husband and I were craving Southern fried chicken this week. There’s nothing better than crisp, flavorful breading on a tender piece of chicken—especially one with the unique flavor of grated Parmesan cheese.

I have to admit, I already had thighs and legs at home ready to be cooked, so I tested this recipe out on those cuts of chicken instead of the wings. Of course this changed the cooking time (it took about 12 minutes on each side in the hot peanut oil). My only recommendation would be to make sure you have enough salt in the flour-Parmesan mixture. Even though the Parmesan adds a salty taste to the crispy coating, I found it needed a bit more salt than I originally put in the mixture. I’d say for this amount of flour-Parm, probably a good tablespoon salt would be perfect, along with 1 teaspoon black pepper. May sound like a lot of salt, but fried chicken should have a ton of flavor in my opinion!

Lastly, I loved the addition of paprika, oregano, and dried mustard here. This was a great coating for fried chicken of any kind, especially when served with collard greens and mashed sweet potatoes.

I was very excited to test this Southern fried chicken wings recipe because I absolutely love chicken wings. It was fantastic! It was easy, quick, and didn’t make much of a mess despite the coating and pan-frying.

I had all the ingredients I needed in the pantry and I used a 10-inch cast iron skillet to cook the wings. I followed the recipe exactly as written except the wings had an internal temperature of 210°F after I fried them so I’ll try taking them out a little sooner next time to see if I can get closer to 165°F. Still, the wings turned out wonderful! They had a nice, crunchy batter and the meat was tender, juicy, and pulled off the bone with ease. Every one of my testers loved the wings.

We served them with some hot sauce and ranch dressing as dips. The wings kept very well in the refrigerator, and when reheated in the microwave for 2 minutes, they were still tender and delicious. The only thing I would suggest is to maybe add a bit more oregano to the flour mixture. I found the platter of 24 was plenty, but another batch could easily be cooked in about 12 minutes if everything was prepped for cooking. I will definitely be making these again!

We’re big fans of Southern fried chicken and these little wings definitely earned a place in our chicken wing rotation.

The 2 inches oil was enough to submerge the little wings as it bubbled up around them, so no turning necessary. I just gently nudged the wings a couple of times with a chopstick to make sure they weren’t sticking and were browning well. I was able to get these done in 2 batches. By the time the first batch was cool enough to eat, the second batch was done.

These Southern fried chicken wings are tasty and this is a pretty easy, straightforward recipe. I like the tanginess of the Parmesan. Definitely worth a try.

These are great at room temperature, so make a batch and set them out all at once—otherwise by the time you finish frying the last batch, there won’t be any left.