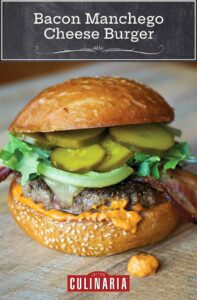 This bacon Manchego cheese burger made with freshly ground beef, Manchego, and romesco sauce is brilliant, surprising, inspired, and so harmonious it’s as if the ingredients were fated in the stars to be together.

In the beginning, we fielded a lot of complaints about our bacon Manchego cheese burger. Not about the burger itself. (It’s perfect.) Just that a Spanish restaurant had a burger on the menu. But burgers are everywhere in Spain—especially in Madrid—and whenever I’ve visited I’ve always been able to find one, which is crucial when you’re sick of seafood and craving something simpler. Beyond that line of burger defense, we’ve always wanted to be an affordable neighborhood restaurant with a really top-notch $10 burger. This is it.–John Gorham and Liz Crain 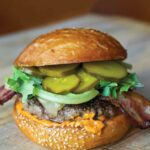 This bacon Manchego cheeseburger made with freshly ground beef, Manchego, and romesco sauce is brilliant, surprising, inspired, and so harmonious it’s as if the ingredients were fated in the stars to be together.
Prep 15 mins
Cook 15 mins
Total 30 mins
Mains
Spanish
2 burgers
953 kcal
5 / 3 votes
Print Recipe 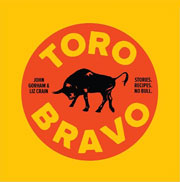 *What is chuck flap beef?

Chances are you’ve not had a burger like this before. Not just because of the Spanish-inspired accoutrements, which result in it being, essentially, a bacon Manchego cheeseburger, but because of the burger itself. See, the authors rely on a cut of meat called the chuck flap, which is a large section of rib meat with a lot of extremely beefy flavor. It’s essentially a particular kind of chuck. Four parts ground chuck to one part ground rib eye works just dandy in its place in the recipe below. (One of our dear and discerning recipe testers did the math for us, and it equates to 2.4 ounces ground rib eye and 9.6 ounces ground chuck. Besos, Robert!) Best. Burger. Ever. Olé!

I used the rib eye and chuck mixture (2.4 ounces ground rib eye and 9.6 ounces ground chuck). Romesco is not typically served with beef, but with the addition of cheese, this worked wonderfully. I want to try exploring these ingredients in both meatloaf and meatballs, tapas-style.

There’s a lot of work to this bacon Manchego cheeseburger but it’s certainly worth the effort. The burger meat is very flavorful with the addition of the ground rib eye to the ground chuck. The rib eye adds to the cost, but again, it’s well worth it. I used baby arugula as a substitution for the mesclun, and its peppery flavor was the perfect complement to the Manchego, bacon, and romesco.

I suggest making the pickles and the romesco a day or two ahead of time to make the preparation go quickly.

Pickling the zucchini was very simple. I used my mandoline to slice the zucchini 1/8 inch thick. Since the mandoline was already out of the cabinet and sitting on the counter, I also used it to julienne the onion and to slice the Manchego. I only made a small amount of pickled zucchini. It was easy to cool them in the pan they were boiled in, so I skipped the step to transfer them to a shallow pan before placing them in a glass jar.

Unfortunately, the bottom burger bun became very soggy from the sauce being placed directly on it. To correct this the next time, I’ll place the burger patty directly on the bottom half of the bun and slather the romesco sauce on top of the patty, followed by the lettuce and pickles.

This bacon Manchego cheeseburger recipe has some very strong flavors at work but it’s not an overpowering or heavy dish. The light tang in the zucchini pickles blends well with the spice in the romesco and lifts the overall taste from potentially overwhelming to satisfyingly sublime. The romesco was wonderful and could be used on a variety of other sandwiches.

While Manchego cheese is a great complement to this burger, not everyone at my dinner table enjoys Manchego, so I let them select their preferred cheese. Extra sharp Cheddar, Havarti, and provolone were used as fantastic alternatives. The cooking time for the burgers themselves is spot-on for a rarer burger. If less pink is desired, an extra 2 to 3 minutes does the trick.

This burger deserves a great bun. I purchased some gourmet sesame seed buns at the butcher shop where I selected my meat. It was a beautiful burger that would present well for a special occasion or elevate a weekday meal. It didn’t disappoint.

Preparing the romesco and zucchini pickles in advance really makes this burger very simple to put together. A day or two of rest for the romesco really does allow the flavor of the sauce to develop and deepen.

Sometimes my body just craves a burger, and this bacon Manchego cheese burger recipe sure hit the spot. The finished product, with so many flavors, was wonderful. Nothing clashed. Everything worked together and complemented everything else very well.

Now, saying that this burger takes 30 minutes total to make is a bit misleading. You need to start making the components of this dish at least a day ahead of time. On to the components:

Pickled Zucchini
I made 1/4 of this recipe, and that made far more than enough pickles. The finished product was very good. I’m not sure whether or not you can tell that these are zucchini pickles and not pickles made with cucumbers.

Romesco Sauce
I made 2 cups of romesco sauce to put 1 tablespoon each on the bottom of 2 hamburger buns. This particular romesco was quite dark due to the 3 dried ancho chile peppers that I used. They were also quite smoky, so I didn’t add the optional smoked paprika.

The Burger
I bought a young Manchego, aged 3 months, which was very tasty on the burgers. I loved cooking the burgers in the bacon fat. I cooked them for 2 minutes on one side, then turned them over. They needed 2 more minutes to be perfectly medium-rare. The burgers were beautifully cooked from top to bottom. There was no grayness at all on the top or the bottom of the burger. I am a big fan of grilling burger buns, so it was nice to see it called for in the recipe.