Pasta alla Norma, made with baked or roasted eggplant, ricotta, tomatoes, pasta, and fresh herbs, is an authentic Sicilian dinner that’s welcome any day of the week, any night of the year.

We’ve tried a lot of pasta alla Norma recipes in our day, and we gotta say, after making this one, our search ends. It’s that lovely. Curiously, and perhaps not coincidentally, this is the only one we’ve tried that roasts the eggplant rather than fries it, and we think that makes all the difference. If eggplant is allowed to soak up oil to its heart’s content, the resulting dish tends to taste heavy and unbalanced rather than intensely eggplanty. Thanks to this easy and amazing recipe, none of us ever have to experience that again.–Renee Schettler

WHAT IS LC HUMP DAY PASTA?

What is ricotta salata?

Italian Ricotta Salata is made from the whey of sheep’s milk that is pressed, salted, and aged for at least three months. It’s perfect for crumbling, grating, and slicing.

When was pasta alla Norma invented?

Legend has it the pasta dish was invented in Catania, Sicily in the 19th century. It was named in honor of Catanian local Vincenzo Bellini, the composer of the opera Norma.

Can I grill the eggplant instead of roasting it?

Sure can. Rather than dicing the eggplant, cut it lengthwise (from stem to end) into 1-inch thick slices, brush lightly with oil, and grill until cooked through. 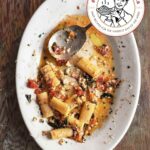 This is a terrific vegetarian-friendly pasta which, while wonderful at the height of summer, could be good year-round if you have access to good eggplant and tomatoes. For those of us who really love eggplant, the roasted treatment means you get all the lovely flavors and the oven does the hard work. The recipe can easily expand or contract. I tried this recipe a second time with narrow Chinese eggplants and that worked fine as well.

I used more than 1 1/2 pounds of fresh heirloom tomatoes, diced, with their skin. If you can mix varieties, play with the flavors, maybe using yellow and red tomatoes. It only takes a few minutes to dice the tomatoes, which you can do while the eggplant is roasting. Basil is the star herb in this dish, so I found keeping the mint and parsley to 2 or 3 tablespoons total was plenty without dominating the dish. The herbs played really well with the ricotta salata. This is perhaps the first time I’ve really seen this cheese work well in a dish, and it was a nice contrast, as it didn’t really melt but grated nicely. In a pinch, you could substitute feta; I tried that on my second batch, and it worked well with the ingredients, but it tended to melt and was less distinctive than the ricotta.

Be sure to watch your eggplant as it’s roasting; I found with the Italian variety that I needed to give it an extra 5 to 10 minutes in the oven and toss it a bit in the middle. The narrow Chinese varieties roasted a bit quicker even though the dicing was roughly the same.

We first tried this dish with linguine and then used penne with the leftover sauce the next day. I think the penne worked a bit better. The sauce reheated nicely and did not suffer at all. The second batch of the sauce, which I made with Chinese eggplant, a mix of yellow and red tomatoes, and feta in place of the ricotta salata, was served over zucchini noodles and was stunning—my chief taster asked twice if I was sure there was not any “real pasta” in this dish.

For vegans, the cheese could be left out, and this sauce would still be wonderful.

When I look at how quickly this comes together and how fresh it is, I have to wonder why there are so many bottled sauces in the grocery store—this has to be better than any I have seen yet. It’s simple, fast, healthy. This will be a regular menu item at our house!

The problem with traditional pasta alla Norma, as with any sautéed eggplant dish, is that, as I’m sure you’ve noticed, eggplant absorbs oil like a sponge, and 1/2 cup oil can disappear into one’s pasta sauce only to magically reappear later on one’s waistline. This recipe solves that problem by tossing the eggplant in a minimal amount of oil and salt and roasting it in the oven. Not only does it save on the fat, but in my opinion, this technique produces a cleaner, more vibrantly flavored dish.

The roasted eggplant absorbs flavors from the sauce rather than getting saturated with oil, and has a deep, almost meaty flavor. The flavor is further enlivened by the generous use of herbs, especially the mint. One could reduce the fat in this recipe even more, as 4 tablespoons oil is really more than you need to sauté the garlic and get the tomato sauce going. The ricotta salata, which the author lists as optional, is the traditional cheese for this dish, but I decided to omit it. The author also suggests serving grated Parmesan at the table, which isn’t traditional for this dish. I skipped that as well in order to keep the dish vegan. Either way, this will make for a very delicious and satisfying vegan or vegetarian main.

The timing was perfect for cooking the eggplant. I used 3 tomatoes that weighed a total of just under 20 ounces. I didn’t peel or seed them nor did I salt them in advance. I just plopped them in the pan and salted them later to taste.

This is an excellent version of pasta alla Norma. The sauce comes together perfectly, and I really liked the fact that I was able to use 3 different herbs from my herb garden. In addition to the 1 cup chopped basil, I added about 1 tablespoon chopped mint and 1/4 cup chopped parsley, which really took the dish to another level of flavor.

In my preparation, the mint was noticeable but not overwhelming, and that’s exactly how the mint should be in this dish. I wouldn’t add any more than 1 tablespoon mint, however, or it could overpower the dish.

I used 2 pounds of ripe Jersey tomatoes and 1 3/4 pounds eggplant. I cut the tomatoes into 1/2-inch dice. This worked very well in the sauce and I don’t think it’s at all necessary to go through the process of peeling, seeding, and resting the tomatoes in a colander.

Be sure to salt the ingredients as you prepare them, but don’t overdo it since there will be quite of bit of saltiness added at the end with the ricotta salata and the Parmesan. You can give it a final taste and add more seasoning if needed.

To me, this pasta alla Norma is what classic Italian pasta should taste like. Fresh, ripe tomatoes and lots of basil. I think that roasting the eggplant was an excellent idea and the ricotta salata is a must!

I had a white eggplant from my CSA box that weighed about 250 grams, which measured 2 cups when cut into 1-inch dice. This was good for us (even though we are not huge eggplant lovers). I seeded the tomatoes but didn’t skin them, and I salted them for 10 minutes before cooking. I think this step was important for drawing out the flavor. I didn’t use mint. I did use the ricotta salata and found that it was a wonderful addition to the dish.

After tossing the pasta with the sauce, I found it to be quite dry, so in the future, I’d probably just cook less pasta. I set 1 cup pasta cooking water aside, and I ended up adding 1/2 cup to the mixture, which resulted in well-coated pasta.

This sauce is not like a traditional marinara you would get from a jar. It’s more the consistency of thick and chunky salsa. It coats the pasta but doesn’t leave any liquid at the bottom of the plate.

A brilliant feature about this recipe, in addition to its amazing aroma and flavor, is that most of the primary ingredients are growing in my backyard garden. There were no large ripe eggplants in my garden, so I picked 2 small ones. In the time it took the oven to preheat, I cut the tops from the eggplant, peeled them, and chopped them into 1-inch cubes. This measured 4 cups. Roasting the eggplant removes enough liquid from it to keep the sauce from being weirdly textured and spongy like eggplant can be. I seeded them, diced them, sprinkled them with salt, and allowed them to rest in the colander for 10 minutes. I didn’t peel the eggplant.

I sautéed the garlic and crushed red pepper for about 2 minutes. The basil took an additional 2 minutes to wilt and turn dark green. By the time I added the tomatoes, the entire house smelled like an Italian restaurant. The aroma alone was worth cooking the dish, but the flavor of the dish surpassed the smell.

I didn’t use the ricotta salata (because I couldn’t find it) or the mint. I did use 1/4 cup chopped flat-leaf parsley and additional Parmesan, which made for a spectacular presentation. In the future, I’d like to try this sauce with angel hair, vermicelli, or fusilli.

Everyone in the house loved it. I’m looking forward to making this dish often throughout the life of my summer garden.