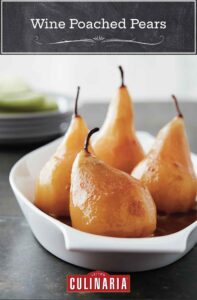 These wine poached pears are an easy, elegant dessert made by gently cooking peeled pears in white wine and then drizzling them with a creamy butterscotch sauce.

Divine elegance. There is just no other way to describe these perfect wine poached pears. They’re beautiful and taste fantastic. [Editor’s Note: With all due respect, we’d like to also cite “simple” and “quick” and “easy” and “impressive” and “low-calorie” and “gluten-free” to the list of adjectives for this lovely little number.]–Roxanne Wyss and Kathy Moore

Our testers adore the fact that this impressive classic French dessert can be made in a slow cooker, and that it offers an untraditional but decadent butterscotch sauce for serving.

Poaching is a technique for cooking foods in barely simmering liquid. This method for poaching pears in wine was developed in France for using up fruit that wasn’t quite ripened. The long slow gentle cooking breaks down the fruit slightly, making it tender and juicy, and highlights the natural sweetness of the pears.

How do I select a perfectly ripe pear?

You can tell if the fruit is just ripe by cupping the pear in your hand and giving it a gentle squeeze. You want it to yield slightly but not completely. For this recipe, use Bosc or Anjou pears. Save the softer Bartletts for making apple pear sauce.

What should I serve with these poached pears?

The pears and butterscotch are lovely on their own, but you can dress them up further with a dollop of whipped cream, sweet whipped ricotta cream, French vanilla ice cream, or a sprinkle of crushed nuts.

Can I make these with red wine? 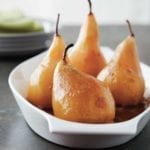 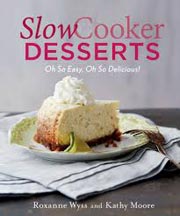 For the wine poached pears

For the butterscotch sauce (optional)

This recipe for white wine poached pears is a keeper. It’s such a sexy and impressive dessert. It looks so simple and elegant at the same time.

I didn’t have a Crock Pot on hand so I used a heavy-bottomed pot with a lid in the oven at 300°F. My pears were fork tender after 4 hours. The pears had a nice color and held their shape.

The butterscotch sauce was such a nice complement. It was so silky smooth and paired well with the texture of the pears. Not to mention that it was so easy to make! It’s a sauce that can also be used with other desserts—even over no-churn vanilla ice cream.

This dish is a good way to impress friends and family as the finished product looks like it took a lot of work…but that’s our little secret!

I love, love, love a recipe like this one that’s simple yet incredibly impressive. Poaching fruit is a wonderful way to infuse the best fruit of the season with a touch of extra flavor. Whether the infusion calls for wine, tea, herbs, spices, or extracts, it’s a classy way to serve a healthy dessert.

I adored this wine poached pears recipe for coming together in a slow cooker and including a decadent butterscotch sauce.

The pears alone, without the sauce, were decadent, tender, and perfectly infused with the wine and vanilla extract. The vanilla perfumed the pears nicely, and I’d be tempted to add either a touch of almond or hazelnut extract to the poaching liquid next time to change the base recipe up a bit. Then maybe serve the pears with crushed nuts? Whipped cream?

In terms of the recipe itself, on low heat, my pears only took 3 hours until they were very tender. So I would check them after about 3 hours just in case they’re done. I loved this recipe and plan to hold on to it for our next fall dinner party!

Elegance and Crock Pot are not words I would ordinarily use together in a sentence. That being said, this recipe truly produces an elegant Crock-Pot dessert.

Within 10 minutes of starting my preparation, I had all the ingredients in the Crock-Pot (that includes the time it took to peel the pears). I used Red Bartlett pears because those are the pears I had on hand. Even though the Red Bartlett is a more delicate variety than the Bosc, the recipe was still incredibly successful, producing a tender but not mushy pear.

Initially, I thought the recipe required too much water. However, it was just the right amount to poach the pears without the fruit becoming dry while it cooked. As an added bonus, while the pears were cooking, the aroma made my house smell like a 5-star restaurant. My pears were ready to serve within 3 1/2 hours of placing them in the Crock Pot and turning it on.

The butterscotch sauce was simple to put together and truly delicious! I was excited there was about 1/2 cup leftover after saucing the pears so I could sneak away later and eat it with a spoon. The finished product is sophisticated, beautiful, and tastes fantastic.

After removing the pears from the Crock-Pot with a slotted spoon, I saved the cooking liquid to freeze in an ice cube tray. This will be handy to use in iced tea and for recipes requiring a simple syrup.

Serve these wine poached pears with a spoon and knife rather than a fork. It makes them much easier to eat.

This elegant dessert recipe for poached pears in white wine was easy to follow and yielded great results.

In preparing the pears, I found that the recipe called for much more sugar than what would stick to the pears when sprinkled, so the remainder of the sugar ended up in the poaching water rather than being applied directly to the pears.

I also found that the pears didn’t sit upright easily in the slow cooker; they wanted to float onto their sides in the poaching water. I tried to coax them back into position a couple of times but I didn’t want to keep disturbing the temperature or the cooking process by removing the slow cooker lid and fussing with the pears.

My pears were fork-tender at 4 hours, though I think they could’ve cooked a little longer. While the end result was delicious, I didn’t notice a markedly wine-infused flavor (I used pinot grigio) and wonder if it was a necessary addition.

Lastly, although the upright pears look lovely drizzled with the butterscotch sauce, they would be much easier to eat if they had been cored and quartered prior to poaching.

My love of pears drew me to this recipe. This was an easy recipe to make and was very fancy-looking. Would make guests feel very special to be served this dessert.