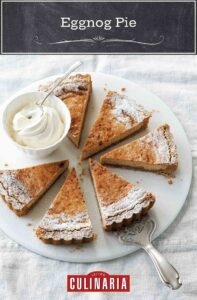 Eggnog pie is as easy to make as eggnog and bears much likeness to its rich namesake custard spiked with rum. It’s just in a graham cracker crust. Think of it as a slightly tipsy-inducing cheesecake—and the most quintessential holiday dessert we can imagine when it comes to Christmas.

This eggnog pie was inspired by the classic Christmas eggnog punch. It’s a rich, creamy, boozy Christmas dessert that imparts a tremendous amount of comfort thanks to its hefty splash of rum, er, we mean, its familiar flavors of cinnamon and nutmeg.

It’s actually quite a lot like cheesecake…aside from the face that it packs a punch that’s guaranteed to make you jolly after a slice or two. We like to classify it under “holiday desserts for parties where people like to party.” [Editor’s Note: Best not to place this anywhere near the kids’ table!]–David Leite

There’s a whole bunch of reasons our recipe testers adored this holiday pie. It’s easy to make and can be made in advance, making it perfect for holiday parties. They also loved the creamy but light, not-too-sweet filling.

What should I serve with this pie?

A dollop of freshly whipped cream and a sprinkle of ground nutmeg is the only adornment this pie needs. Our testers loved serving it with bourbon or rum-spiked whipped cream.

The pie can be made up to 3 days before serving. Store in the refrigerator, loosely covered with plastic wrap. 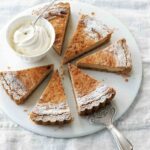 Eggnog pie is as easy to make as eggnog and bears much likeness to its rich namesake custard spiked with rum. It’s just in a graham cracker crust. Think of it as a slightly tipsy-inducing cheesecake—and the most quintessential holiday dessert we can imagine when it comes to Christmas.
Prep 25 mins
Cook 50 mins
Total 1 hr 15 mins
Dessert
American
10 servings
371 kcal
5 / 3 votes
Print Recipe 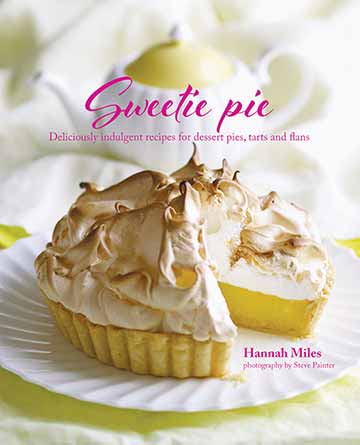 For the eggnog pie filling

If you’re a fan of eggnog, you’ll love this eggnog pie. I really did enjoy this. It has all the same flavors, including nutmeg, which really add to the pie.

As far as texture, it was a little lighter than a cheesecake, but had the same mouthfeel—very smooth and creamy. The crust was also good, not soggy at all, very crumbly, and almost crisp. (The graham crackers were pulsed in the food processor.)

I made my own apple pie spice, which I believe intensified the spice flavor and gave the pie a speckled color from the cardamom.

The pie is already rich, so whipped cream took it up another notch, adding a bit of freshness to the spicy eggnog flavor.

It’s a nice variation on cheesecake and I think it will be welcomed at this year’s Thanksgiving dinner!

I was immediately drawn to this eggnog pie recipe. The idea of basically drinking spiked crème anglaise is enough reason for me to drink a cup or two each Christmas season. Could it be as good as it sounded?

When I read over the ingredient list, it seemed similar to a cheesecake, with a lot of rum added! My cream cheese was at room temperature, but I still used an electric mixer to ensure there were no lumps in the filling.

I started with just 2 tablespoons rum, thinking that was already a lot of rum, but went ahead and added the remaining 2 tablespoons. I poured the filling into the crust and it filled the pan about halfway.

I baked the pie for 50 minutes, which was enough time. It was still a bit shaky but set on the sides. The pie did “puff up” and fill the entire crust, so I suppose it was good that it had the extra room although it did fall back once it cooled for about 2 hours.

The pie cut very nicely. I whipped up some cream and sweetened it with confectioners’ sugar and added vanilla and spooned it on top of the pie. The whipped cream really added to the taste.

This eggnog pie recipe was a relatively easy holiday dessert that would be great to bring to a party. However, it’s boozy, so maybe not something for an all-ages party.

The graham cracker crust is quick and simple and the filling came together easily as well. Next time I might strain the custard filling.

The pie was very rich and could easily serve 10 people.

I found the pie to taste better after a day—the flavors seemed to have melded a bit. I made some rum-flavored whipped cream to enjoy with the pie as well. Both together were very rum-flavored, if you’re into that sort of thing.

This pie brought to mind flavors of eggnog. The finished result was well-balanced with no one flavor standing out and was well-received by my guests. The most frequent comment was that tasters liked the lightness of the holiday dessert.

If I didn’t know rum was in the pie, I would never have known it was there. I made the pie with only 3 tablespoons rum, and I would probably have liked the additional tablespoon of rum. I served it with rum-spiked whipped cream and a sprinkle of fresh nutmeg.

This would be a great thing to make when you don’t want to run to the store, as these ingredients are always in the house. The pie only lasted overnight so I’m not sure about storage!

This eggnog pie worked perfectly. The flavor was subtly spiced.

On removing the pie from the oven, it was a darkish brown and had a slight wobble in the center and no surface cracks. The pie stayed in the fridge for a few days and the crumb softened a bit, but it wasn’t soggy when we were eating the last piece.

‘Tis the season for eggnog in its every variation! The eggnog pie came out a beautiful cream color with a very soft filling.

After the pie cooled, I noted that it was too sweet. After a day in the refrigerator, the taste changed. It was perfect with sweetened whipped cream and a hot eggnog latte.