This black-eyed pea stew recipe, made extra satisfying with ham or ground sausage, brings good luck to those who consume it on New Year’s Day. Or so says Southern tradition. We’re quite partial to this version of the classic which never fails to bring us sated appetites.

There are countless iterations of black-eyed pea stew recipes in the South. This particular recipe, which can be made with sausage or ham hocks, was handed down through the generations of the Watkins family from Hartsville, South Carolina. Southern legend has it that black-eyed pea stew brings good fortune for the entire year to those who make it part of their menu on New Year’s Day. The good luck isn’t restricted to any one type of black-eyed pea soup, which is fortunate, although we’d bank our entire year’s fortune on the version below.–Renee Schettler Rossi 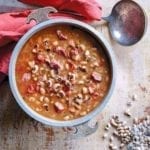 This black-eyed pea stew recipe, made extra satisfying with ham or ground sausage, brings good luck to those who consume it on New Year’s Day. Or so says Southern tradition. We’re quite partial to this version of the classic which never fails to bring us sated appetites.
Prep 25 mins
Cook 2 hrs 20 mins
Total 2 hrs 45 mins
Mains
Southern
6 to 8 servings
518 kcal
5 / 4 votes
Print Recipe 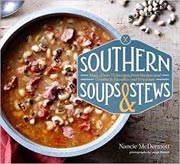 There’s some controversy surrounding whether or not to soak black-eyed peas (and other sorts of dried beans and things) prior to cooking. Tradition holds that legumes need to be soaked in cold water to cover for at least overnight. But hurried home cooks have found that simmering legumes, including black-eyed peas, in twice as much water as a recipe requires turns out soups and stews, such as this black-eyed pea stew, that are really quite identical to those in which the beans are first given a time-consuming overnight soak. But without that long lead time. Whew.

This is an easy stew that would make a perfect addition to your New Year’s menu (gotta get those peas for good luck). I opted to use Italian sausage, which I removed from the casing and chopped into bite-size pieces. I think next time I might try a sage sausage just to mix it up a bit.

The stew benefits from a rest, as it allows the flavors to meld and the broth to thicken. I made it earlier in the day and reheated it for dinner. We served it with a big batch of creamed callaloo though it would pair equally well with collard greens or spinach. The recipe makes a gracious plenty, so we froze individual servings for a quick lunch on a cold day.

A great hearty fall soup recipe that you can use year-round. I love having sausage on hand that can turn a pantry meal into dinner on fairly short notice with ingredients we have on hand or can easily obtain. This recipe is perfect for those times, maybe not quite a weeknight dinner but a short afternoon project.

The stew yielded days of meals for our small household that were just as good as the first night, if not better. Black-eyed peas don’t really require a pre-soak, so your planning isn’t fussy, and you can choose to make the stew as spicy as you please. Since I didn’t have ham hocks but was using freshly made Italian sausage from my favorite butcher, I used fire-roasted tomatoes to bring in a bit of smoky flavor and added a bit of Penzey’s Black and Red Pepper at the end when adjusting the seasoning. I also added 1 cup broth at this point, as it looked a little dry. We gave the stew an extra 15 minutes of cooking time to let the flavors adjust after adding the chopped sausage back in, adding the extra liquid, and adjusting the seasoning. The sausage had a very delicate casing, and easily crumbled into a coarse grind, mixing well with the stew.

We served it hot that day and reheated it on subsequent days. Each time we had a bowl of this, it was delicious—just the right amount of heat and, most importantly, it made us fans of black-eyed peas once again. I only had them prepared very simply growing up, with a dash of red wine vinegar and maybe some wild greens when my grandfather would make them Greek-style. I love the hearty and healthy use of the beans in this recipe with the sausage, though of course you could do a lovely meatless version as well. A little attention here and there, and you have a gorgeous stew for dinner on the table in under 3 hours.

What a hearty, earthy dish to launch into winter! This doesn’t take too much time to get cooking and then it simmers until it’s done.

I advise monitoring its progress a bit more closely than I did, however, as I lost a lot of the cooking liquid along the way. That was the only real problem I had with the recipe. When making this again, I’d check the simmer more carefully and add extra stock and/or water as it cooks.

Not being fond of cooking ham hocks, I took the sausage option here. Four hot Italian pork sausages equaled exactly 1 1/4 pounds, but I believe they displaced more liquid in the pot than a ham hock would have, and that might’ve affected the cooking time. After the stew had simmered for 1 3/4 hours, the peas were still not done, but the liquid had cooked down quite a bit. As a quick remedy, I pulled the sausages out, so the beans would have the broth all to themselves. At that point, the beans were covered completely. I sliced the sausages about 1/2-inch thick and added them back in when the peas were done.

Normally I would not add tomatoes at the beginning when cooking dried beans because they retard softening. I’m not sure how much faster these would have cooked if the tomatoes went in once the black-eyed peas had started to soften, but a shorter cooking time might have also mitigated the problem with too much liquid evaporating. I made this earlier in the day to reheat for dinner. Keeping in mind that stew is not soup—there still was not enough liquid when I reheated, so I added a little chicken stock (about 1/4 cup) to each bowl. The next day, the leftovers of this had no liquid left at all.

It was pretty easy to put together, only about 15 minutes prep and a little over 2 hours cooking. I used mild beef sausage because I didn’t want it to be too spicy. I think this would also do great in a slow cooker.