Think of these twice-baked potatoes as an easy mashed potato casserole loaded with bacon, Cheddar, sour cream, and chives. Talk about awesome game day grub or meals kids—heck, any of us—can’t resist.

These twice-baked potatoes have everything going for them. And by “everything” we mean bacon, Cheddar, and sour cream. It’s quite similar to the best loaded potatoes you can imagine, the only difference is these are more like a mashed potatoes casserole that you can assemble ahead of time and even stash in the freezer. The best part is not having to fuss with toppings at the table while your baked spud gets cold because these little lovelies are fork-ready the moment they come out of the oven.–Renee Schettler Rossi

Pretty much the same way you baked them the first time around, er, the second time around. But for less time. Crank the oven to 400°F (200°C), place the spuds on a foil-lined baking sheet, and bake until warmed through, maybe 20 to 25 minutes.

Twice-Baked Potatoes With Bacon and Cheddar 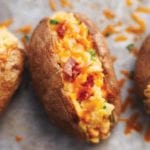 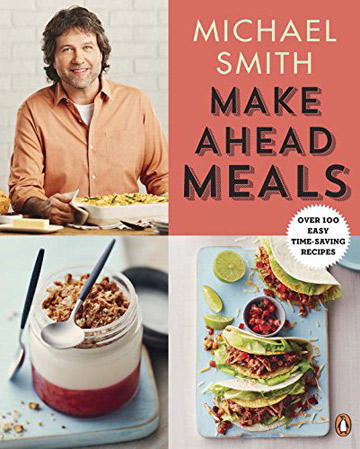 I am a sucker for a good baked potato, and these twice-baked potatoes check off all the boxes—cheesy, bacon-y (that IS a word), and creamy. It’s the perfect cold-weather lunch.

I used 4 gigantic potatoes (weighing in between 340 and 410 grams [12 to 14 ounces] each) and figured that they were twice the size of the potatoes I would normally use (these were the only ones I could find). The smaller potatoes took 45 minutes to bake. I turned off the oven and left the larger ones in there for about 30 minutes more. I heated these in the oven at 375°F for 20 minutes once they were stuffed. I might recommend a couple of minutes under the broiler to brown the cheese a little.

A crowd-pleaser of a stuffed potato. These twice baked spuds could easily be made with or without the final cheese topping, based on your preferences. The bacon added a nice smoky flavor, and the scallions gave a little bite.

I’ve never added water to bacon when cooking, but it seemed to keep the grease splatter down a little, and the bacon didn’t curl up as much as it usually seems to. I’ll try that again in the future. The bacon took 15 minutes to crisp. The mixture was easy to mix up and stuff back in the potatoes. Next time I would add more than 2/3 of the Cheddar to the mix, though, because I thought there was too much left for the topping. Maybe 3/4 for the mix and 1/4 for the topping. I baked them for 20 minutes, and they were piping hot. I only used 1/2 the recipe, so I refrigerated the other half. They reheated well on 50% power for 3 minutes in the microwave and tasted good.

I have been freezing twice-baked potatoes for years. They make a nice quick meal you can pull out whenever needed or those times when unexpected guests show up. My first thought as I read through the directions was “What? You put grease and all in the potato?” That’s exactly what I did, and it turned out great. The flavor was there, and everyone loved these. I was able to hide 2 potatoes. One I wrapped and placed in the refrigerator for a few days, and the other I placed in the freezer. 2 days later, when I took them out and cooked them, there was no texture change. Cooked as is, these make a great meal when combined with a salad. They would make a great side dish with grilled steak or chicken.

These twice-baked potatoes were super easy to make and packed a flavorful punch.

I tend to buy organic produce, so the Idaho potatoes I purchased were a bit smaller than conventional baking potatoes (7 to 8 ounces). I baked the potatoes in my convection oven for about 45 minutes. While they were baking, I sliced and cooked my thick-sliced, nitrate-free bacon. I have never cooked bacon with “a splash of water” before, and I liked the result although it sputtered a lot more than usual.

I also grated my favorite cheese (Boar’s Head sharp Wisconsin Cheddar) while the potatoes baked. Once the potatoes were baked and cooled, I cut them and scooped out the potato flesh. I added the cheese, sour cream, scallions, bacon plus the pan goodness, salt, and pepper. I mashed it all together and scooped it back into the skins. It was pretty difficult to keep the potatoes from splitting into 2 pieces. I tried but they wound up splitting, so I just went with it. I did put some of the potatoes in the fridge, tightly wrapped, but baked the rest.

The potatoes were delicious. They had a ton of flavor and were very easy to prepare. The addition of the bacon drippings to the mixture added an unexpected richness without the addition of butter. I did freeze a few stuffed potatoes. While I did not yet test the frozen batch, I did bake the refrigerated batch after two days. I baked them for a bit longer since they were cold, the full 20 minutes, and they turned out just like the fresh baked potatoes. The taste and texture were almost identical, although I felt the refrigerated potatoes were a little more dry.

Overall, an excellent recipe, and I look forward to testing the frozen batch in a week or two!

This recipe for twice-baked potatoes with bacon and Cheddar is one that almost everyone knows about but doesn’t think to use. Not only is it an easy way to make sure your freezer and/or fridge have a quick go-to dinner sitting on the shelves, but it is great just hot out of the oven.

I used 4 large russets with a total weight of 3 pounds. One thing I wasn’t sure about was whether the 400°F oven in which I had just baked the potatoes was the same temperature that I should use to heat them. When reheating one from the fridge, I just put it in the oven covered with foil while my steak was baking using the 275°F oven method. When the steak came out for its 15-minute rest, the oven temp went up to 375°F, and the foil came off the potato, and it worked perfectly! These potatoes served as a main dish with a green salad and more than fit the bill. The second time around, half a potato was perfect to serve as a side with the steak. All in all, this is a winner because it’s easy, tasty, and makes you a really smart cookie to have some on hand for whatever your day throws at you!

The bacon and Cheddar flavor is great. We couldnʻt eat more than a half potato per person, so for us, this recipe serves 8. This recipe is a little bit involved and calls for a lot of cheese. Iʻd guess that you could cut back on the amount of cheese, and it would still be good. I think you might also be able to cut some of the sour cream and use some whole milk to reduce fat content. The skin is a little tough with all the baking, and this could be alleviated just by slathering it with oil before baking. I also like to wrap my potatoes in aluminum foil. I would make these again.