This Korean style steak relies on a quick and easy marinade of soy sauce, ginger, and sugar that comes together from pantry staples and takes just minutes to work its magic before you toss the steak on the grill. Lucky you.

This Korean style steak takes its robust flavor from a quick and easy marinade that works its charms in an impossible-to-believe 15 minutes. It’s the perfect thing when you want to impart a lot of oomph to something in a hurry. Which sorta describes each weeknight or last-moment decision to entertain, yes? While the steak marinates, you have just long enough to heat the grill and scrub down the gunk on the grill rack that you forgot to tend to after your last barbecue. We prefer to pile slices of this steak atop a tangle of rice noodles, shaved carrots and cucumber, thinly sliced radish, and toasted peanuts and drizzle with a soy sauce- or ginger-based vinaigrette. Or simply serve it alongside vegetables stir-fried with the same marinade (double the marinade in this recipe but before adding the steak reserve half for the vegetables).–Renee Schettler Rossi 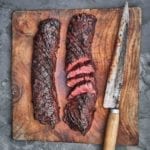 This Korean style steak relies on a quick and easy marinade of soy sauce, ginger, and sugar that comes together from pantry staples and takes just minutes to work its magic before you toss the steak on the grill. Lucky you.
Judy Joo
Prep 15 mins
Cook 20 mins
Total 35 mins
Entrees
Korean
4 to 6 servings
652 kcal
4.75 / 8 votes
Print Recipe 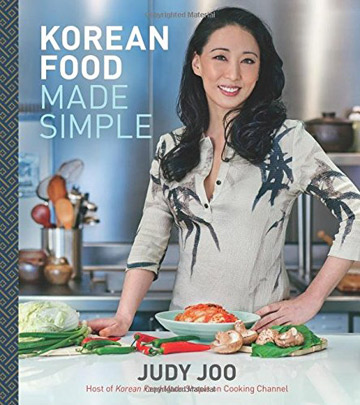 *What You Need To Know: What Is Hanger Steak?

Hanger steak is an intensely rich and robust cut of meat that’s incredibly well marbled and tender. It’s standard fare on French menus, although it’s not always available at American butcher counters. If you can’t find it, no worries, this marinated steak recipe also works exceptionally well on skirt steak and sirloin flap, which have very similar characteristics.

This Korean style steak is a quick recipe to throw together on a busy weeknight. You’ll likely have all the ingredients in your pantry, but if not, you can adjust according to what you’ve got available.

Hanger steak was not available the day I shopped so I used skirt steak with good results. I would say that if you use skirt steak, you will likely use all the marinade since skirt steak is large and flat. But if using hanger steak I would anticipate leftover marinade. I might only pour half on and see if that’s enough. Then you’ve got marinade for another use on a different night.

I find that hanger steak and skirt steak can benefit from additional tenderizing since the meat is naturally on the chewy side. I always “pin” the meat—that is, stab it all over with a fork or a long metal skewer.

Make sure to slice it thinly, on a slight diagonal, after grilling. The grain on skirt steak is fairly uniform and easy to slice across the grain. On the hanger steak, you’ll need to pay attention to the grain, it can subtly change direction within the piece of meat, so you’ll want to adjust the angle of your knife accordingly to keep your slices across the grain.

I served this with a stir-fry of asparagus and mushrooms cooked with a tablespoon of the marinade that I’d added and that made for a very complementary side dish.

Easy is the name of any weeknight dinner game, and this simple yet so flavorful hanger steak scores all the points. This Korean style steak really will make dinner a slam-dunk (ok, I’ll stop now) since it comes together in 45 minutes—including marinating time!

The Asian-inspired marinade would work well with a variety of cuts of meat, just in case you have trouble locating a hanger steak. (I’m thinking a flank or bistro steak next, and possibly extending the marinating time.)

The flavors also play well with different sides. I opted for rice and grilled vegetables but this would be so freaking good in a salad with crumbly cheese or in a sandwich with pickled veggies and cilantro (or not—cilantro is a very personal thing). My only wish was there was a sauce when serving over rice or with a similar side. I’m tempted to reduce the marinade after removing the meat and see if that would produce something worth drizzling over the top before serving.

Oh, and I also found that my steak took just a tad longer to reach medium-rare on my grill than suggested, so I highly recommend using a thermometer instead of relying on timing. That’s it. Go team!

This Korean style steak was a winner for Memorial Day or any cookout anytime! This was a fast and delicious grilled meat and it was a winner with everyone.

Next time, I would marinate the meat for 1 to 2 hours refrigerated and then 15 minutes at room temperature. The 15 minutes didn’t seem like enough time for the marinade to penetrate the meat. We finished the meal out with smashed potatoes, salad, and a nice Merlot.

This Korean style steak recipe is quick to prep as well as quick to make. The result is delicious.

I came upon a piece of flap sirloin at the store and decided to give it a try. The only other time I had made flap meat it was very tough. I wanted to see if this recipe with its teriyaki-style marinade would change my mind about this cut of meat. It sure did. Flap meat is well marbled, and the fat melted and made the meat very tender. It was really yummy.

I made oven-roasted potatoes and asparagus on the side.