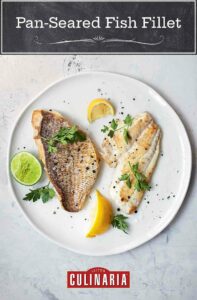 Pan-seared fish fillet. It’s what’s for dinner, pronto. And so easy to make and tastes so darn delectable with its lemon butter sauce that you’re going to completely forget it’s good for you. Here’s how to make it.

My son loves crispy skin on his fish, so I have perfected the art of achieving it. This is a super-easy, no-fuss way of cooking fish–great for a quick and healthy mid-week meal. Fish is full of anti-inflammatory omega 3s, brain-boosting healthy fats, and vitamin D, which every single metabolic process in the body requires–and it just happens to be delicious! Fish fillet cooked this way is great as it is, served with a lovely crisp green salad.–Amber Rose 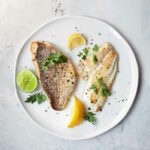 Pan seared fish fillet. It’s what’s for dinner. Pronto. And so easy to make and tastes so darn delectable with its lemon butter sauce that you’re going to completely forget it’s good for you. Here’s how to make it.
Prep 10 mins
Cook 5 mins
Total 15 mins
Mains
American
1 to 2 servings
358 kcal
5 from 1 vote
Print Recipe 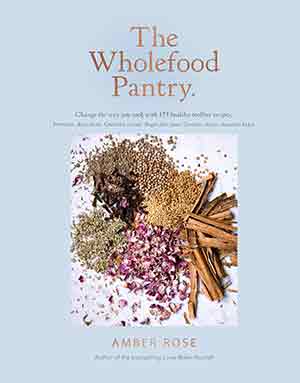 Ghee, which originated in ancient India, is a form of clarified butter (butter that’s been simmered to remove all the water). But unlike regular clarified butter, ghee has been cooked longer, allowing the milk solids to caramelize. As well, it has a higher smoke point and makes it much more shelf-stable. The cooking process also removes lactose, making it perfect for anyone with lactose intolerance. The flavor is richer, nuttier, and with a slightly sweeter, grassy taste. Ghee can be used in most of the same ways that butter can be, but perhaps its best application is as a finishing oil. Drizzled over roasted vegetables, rice, fish–anything that would benefit from some flavor and richness.

It’s enlightening to review a basic technique once in a while, even when you think you already have it nailed. This simple pan-seared fish fillet recipe was a good reminder that details matter and made a glorious summer dinner for one. The entire skin of my wild-caught sockeye salmon was excellently crisp and the flesh side also had a beautiful golden crust. Fresh fish doesn’t need much help in terms of added flavor, but a tablespoon of butter does wonders here.

A few details not to overlook in order to achieve perfect results: 1) you want the surface of the fish to be thoroughly dry before it goes into the pan, 2) to prevent any excess pooling of oil, pour it into the pan (I used my cast iron skillet), then spread it all over the surface with a paper towel, and 3) pay close attention to the bottom edges of the fish—golden brown skin and opaque flesh as the recipe describes—for the exact timing for turning it over. I enjoyed my salmon with halved cherry tomatoes and olives simply tossed with olive oil and fresh chopped oregano.

This pan-seared fish fillet recipe works perfectly as written. It takes all of 10 minutes from start to finish. Don’t skip the butter basting at the end—this will give the fillet flavors that you typically experience only with food served in restaurants.

I made this recipe with salmon. A 3/4 pound fillet served 2 of us. I cooked it for 3 minutes on the skin side and 1 minute on the second side in a well-heated cast iron skillet. It was cooked to a perfect internal temperature of 140°F. I served the fish with sautéed spinach and garlic, coleslaw, and homemade tartar sauce.

Just as I like cooking meat and poultry bone-in, I prefer fish fillets cooked skin-on. I’m not even all that fond of fish skin (it’s not up there with chicken skin, for instance), but I think cooking the fish with its skin produces a better result. It seems to help hold the fish together, for one thing, and, perhaps it’s my imagination, but I think the fish stays moister this way, too.

The technique in this pan-seared fish fillet recipe works quite well. The fish didn’t break apart or stick to the pan. I used a cast-iron skillet to cook a red snapper fillet. I got the pan good and hot and added the oil. After about 1 minute, when I saw what might have possibly been the faintest hint of a wisp of smoke, I added the dry, seasoned fish, skin-side down. It got a little opaque on parts of the edges as the fish contracted slightly, but it did not curve upwards. At 3 minutes, after checking quickly to see some golden color on the skin, I pushed down on the fish with my spatula. After 2 more minutes (5 minutes total), it was opaque most of the way around the edges. After 1 more minute, I flipped the fish over. After 2 more minutes, I added a knob (about 1 tablespoon) of unsalted butter. I basted with the butter and turned the heat off 1 minute later, The fish never did curl or curve upwards.

The red snapper was not the best choice of fish for someone like me who hates dealing with fish bones. It has a lot. But the technique worked fine and the crisp skin was beautiful. I think the added butter really helped make the skin crispier and just put this recipe over the top. I’d use it again. This would have been one serving except there was other food and I wasn’t that hungry. Easily one serving but could be two, depending. I think some steamed vegetables and a simple grain preparation would be my choice of sides with this in the future. Now that it’s getting to be the season, fresh corn on the cob would also be nice.

Seriously—what a great idea. I lose my mind over a beautifully crisp chicken or fish skin and this is such a straightforward and easy way to get it every single time, whether it’s for a dinner party or just my own when my husband is out of town (ahem…usually the latter).