Roasted beets with feta is as simple a recipe as you could want. Beets are roasted and then tossed with feta cheese, olive oil, and vinegar. By itself, a great side dish. But mix it with grains and that’s when the magic happens.

Earthy beets. Salty cheese. There’s something stunning about the contrast between the two. So much so that few other embellishments are required in this easy and ingenious side dish.

As for making and not just tasting this recipe, even experienced cooks may be surprised and, we dare say, stunned by two nifty tricks tucked into the method for roasting beets. Rather than simply plonking the beets on an oven rack, this recipe cleverly relies on wadded up parchment paper and a few drops of water to help capture moisture while the beets roast to ensure even cooking and tender results. (It also means no messy sheet pan or oven to scrub!) It also gives you permission to dispense with peeling the beets (as long as you scrub them) which not only keeps hands-on time to a minimum but creates a subtle crispness to the exterior of the beets. Sorta but not quite like a potato chip.–Jenny Howard 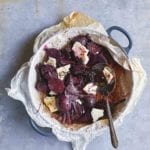 Roasted beets with feta is as simple a recipe as you could want. Beets are roasted and then tossed with feta cheese, olive oil, and vinegar. By itself, a great side dish. But mix it with grains and that’s when the magic happens.
Susie Theodorou
Prep 15 mins
Cook 2 hrs
Total 2 hrs 15 mins
Sides
Mediterranean
4 servings
219 kcal
5 from 1 vote
Print Recipe 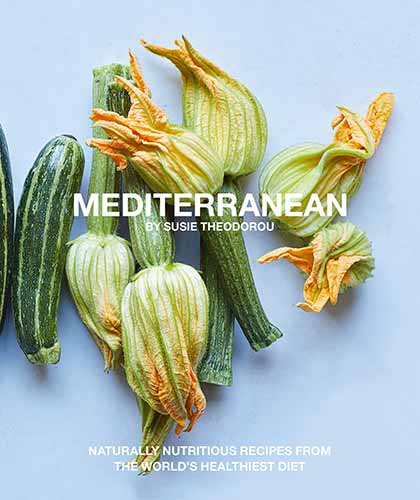 Use the basic recipe and cooking technique described above as a jumping-off point for one or more of these substitutions and additions: Replace the vinegar with orange juice, grapefruit juice, lemon juice, balsamic vinegar, or Dijon mustard. Or simply drizzle a little of any of these over the finished beets just before serving. Just before serving, sprinkle chopped scallions, parsley, or mint over the cooked beets. Toasted walnuts or pistachios would also work well. Create a salad by arrange the beets over arugula or cooked quinoa.

These roasted beets with feta were simply delicious. Lovely bright beets with sweet coriander and salty feta. Wonderful combination of flavors. The damp parchment steamed the beets to perfection. I served them warm with roast beef and garden potatoes. These would be great to make and then serve cold scattered on a salad. A few minutes prep and then walk away. What could be easier?

This is an excellent way to cook beets; we’ll definitely make it again. Fortunately, beets are in season in our part of central Mexico, so I was able to find nice, fresh ones in the local market.

Preparation is simple, so if you plan ahead, you can sit in your courtyard eating guacamole and sipping margaritas while waiting for the beets to be ready.

I would peel the beets. The skins were very hard to remove once they were cooked. This is probably related to the next point: 2 hours is much too long to cook the beets. I checked after an hour and they seemed to be ready, but I gave them another 20 minutes. After an hour and 20 minutes, the cut side was almost crisp and the skin was very hard to remove.

These roasted beets with feta were simple and flavorful. The coriander and vinegar didn’t overpower the sweet deliciousness of the beets, but enhanced it perfectly. Feta took it to the next level.

This recipe works so well because the beets cook to a perfect tenderness. I was skeptical just cutting them in half, as though they were all small, they were still different sizes, but they were all done just right!

I plan to use some of the beets in my salad tomorrow with spicy candied pecans and more feta or goat cheese.

This recipe for roasted beets with feta couldn’t be easier, and what a fun trick using wet parchment paper to braise the beets—it takes en papillote cooking to a new level and clean up was a snap!

Since I’m the only one in my household who loves beets, I made this dish for myself, so I used one bundle of 3 smallish beets which weighed 12 ounces after being scrubbed and halved. The only other adjustment I made was to use just under a tablespoon of coriander seeds instead of the full 2 tablespoons.

After two hours in the oven, the beets were perfectly tender and had a lovely roasted appearance. I tasted them warm with the peels left on, and they were sweet with a little kick of heat. Would be a wonderful side dish warm with the feta. I served them cold for lunch in a quinoa salad with feta, red onion, watercress, and toasted walnuts with a drizzle of homemade sherry wine vinaigrette. Fabulous!!

These beets are impressive, anyway you plan to serve them.

If you love beets and feta then this no frills simple recipe cannot be missed. The cooking method is straightforward, the spicing is spot on and not too aggressive, and the feta tang rounds out the deep flavor of the roasted sweet beets perfectly. I usually always peel the roasted beets, so I am glad this recipe encouraged me to try them with the skin on. The skin turns crisp and add a very nice texture. My wife opted to peel hers, which is very easy after they are roasted. So both methods work.

The recipe can technically serve 4, I suppose, as a part of tapas or a side, but my wife and I polished it off with a grilled cheese-mortadella sandwich on the side!

A very simple, good recipe for the beet lovers out there. I knew beet and goat cheese as a nice combination—beet and feta is also great! The oil, vinegar, and spices combine to produce a good dressing in the finished dish.

I regularly roast beets in their skins but had not done this braising/steaming method before. It worked out nicely but I would say that you would get just about the same result by cooking this as either uncovered or covered with foil. There’s a little more liquid kept inside the parchment this way, but minimal difference.

I’d add either some more sherry vinegar or a squeeze of lemon to the finished dish to sharpen it up a little also.

Seriously wonderful upgrade for roasted beets, this method is surprisingly easy and satisfying. I was a little skeptical of roasting with skins in the dressing, since my usual method is to roast plainly in foil, removing skins before proceeding with any dressing or other treatment. This turned out great, however, and although my beets were a bit larger than the recipe might suggest, they all turned out tender at the 2 hour mark.

The skins weren’t even noticeable and we ate them (although they do slip off well if you insist). The important thing, regardless of size, is to thoroughly clean the beets beforehand. I soaked them for a good while as the oven was preheating, then scrubbed them mercilessly (no one likes cooked dirt!) and made sure no bits of soil clung to the short stems I left on the beets. For some of the larger diameter ones, I quartered them.

I really liked this whole method, using the damp parchment inside a heavy 4½ quart, rounded-bottom Le Creuset “chef’s oven” (any dutch oven would work). The coriander seeds seem like a lot, but as you crush or grind them (a few rounds in a suribachi ,mortar & pestle or crushed with a rolling pin will do it), you get a reminder of what a wonderful fragrance they add and the taste is unique when the beets are done. I used a combination of golden and red beets, so this was even quite pretty.

I initially only put a portion of the feta on the warm beets I was serving, but then decided that while they were warm was best to complete it, even if some will be eaten the next day, as the slight softening of the feta is nice. I also found there was enough oil and vinegar at the bottom of the parchment to spoon over, no needing to add more. I used a really nice Greek olive oil, which at this not-too-high temperature, contributed a nice element of flavor along with a good, aged sherry vinegar.

If your beets have nice greens, be sure to save those to wilt and serve alongside (I chop the stems, add to boiling water for 4 minutes, then add the nicest of the greens for a minute or so to silt, and serve with a bit of olive oil, so this works perfectly alongside if you are so inclined.