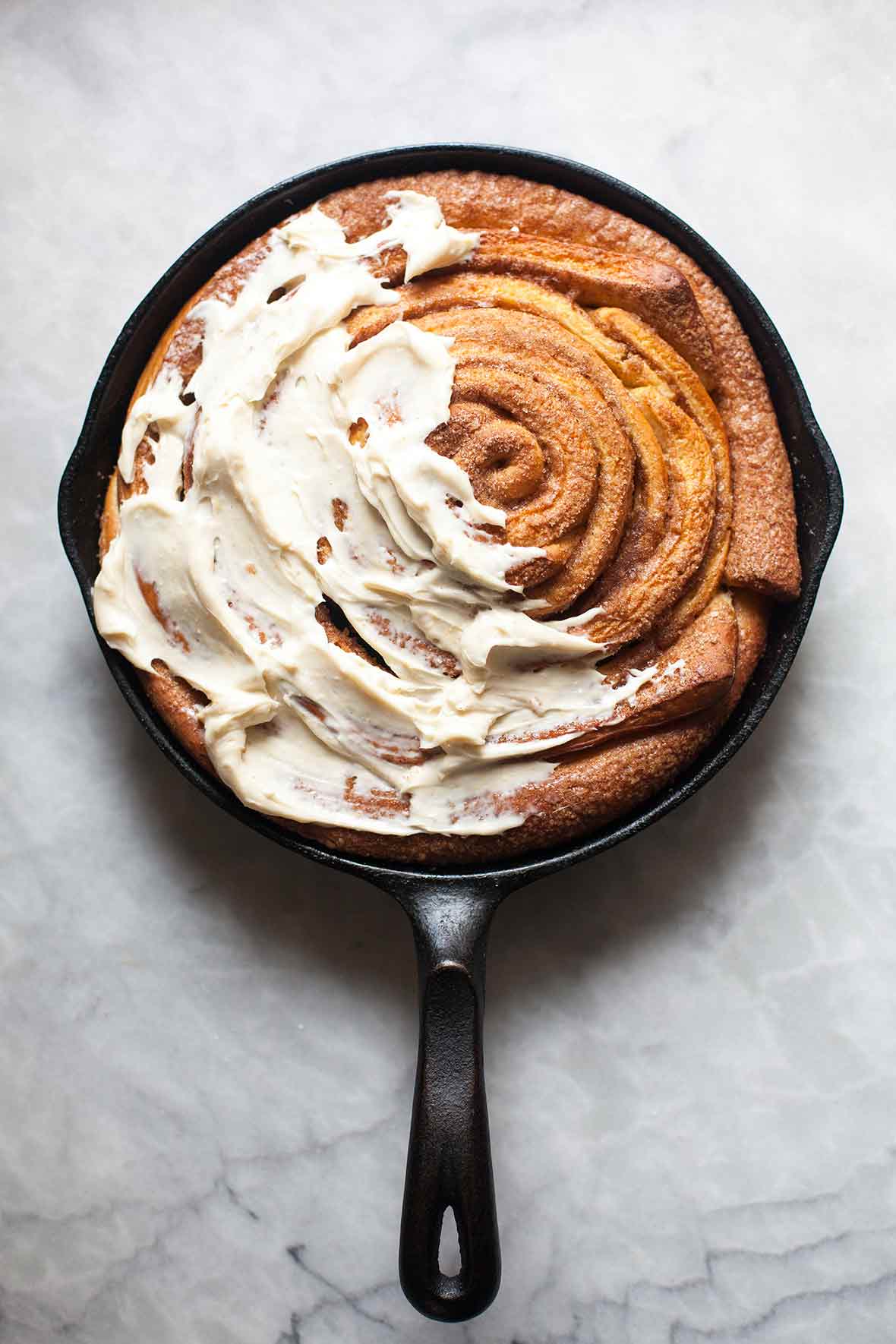 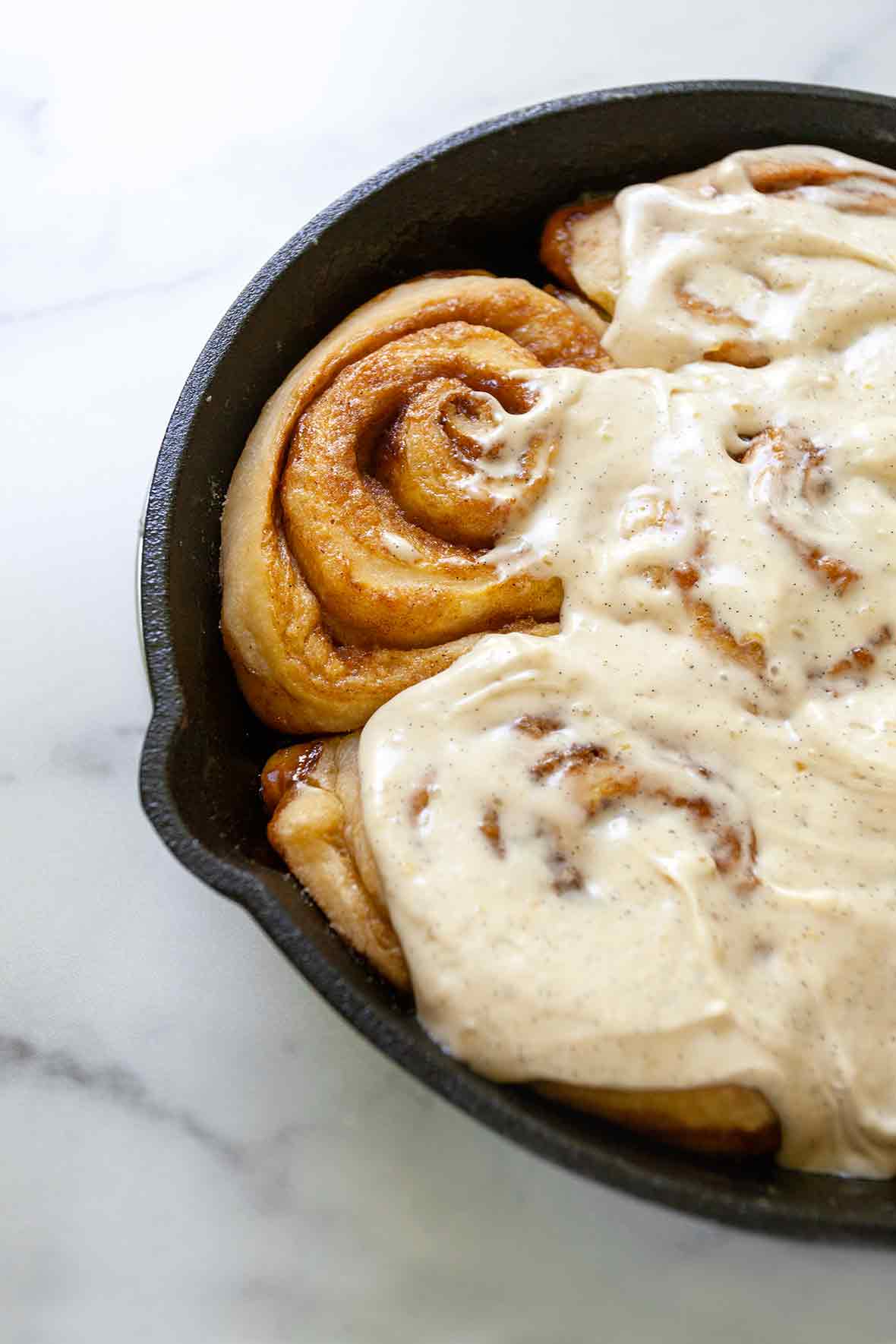 The hardest part of the recipe, we swear, is waiting for the cinnamon rolls  to rest a little after you slather on the cream cheese icing while it gets all melty. 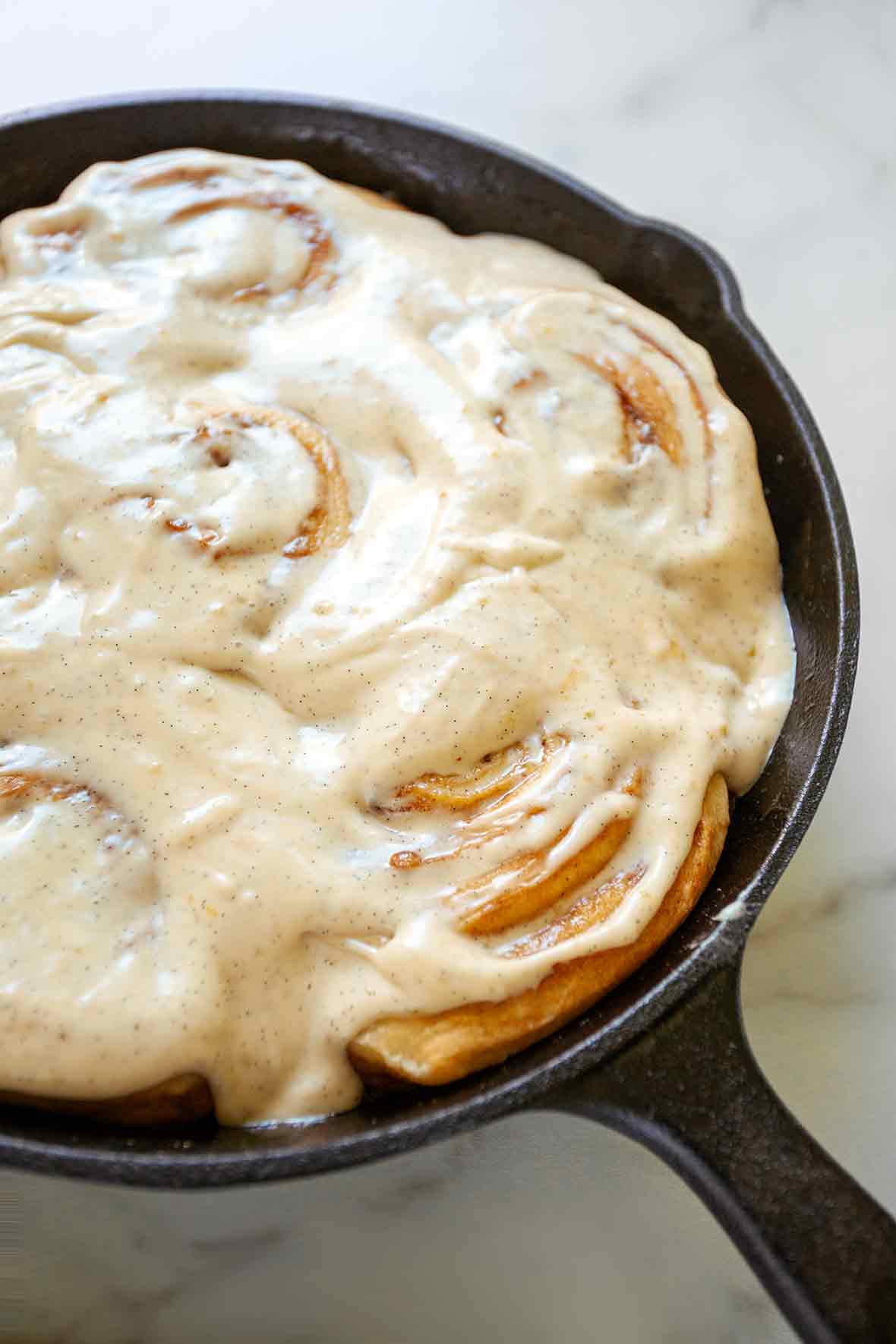 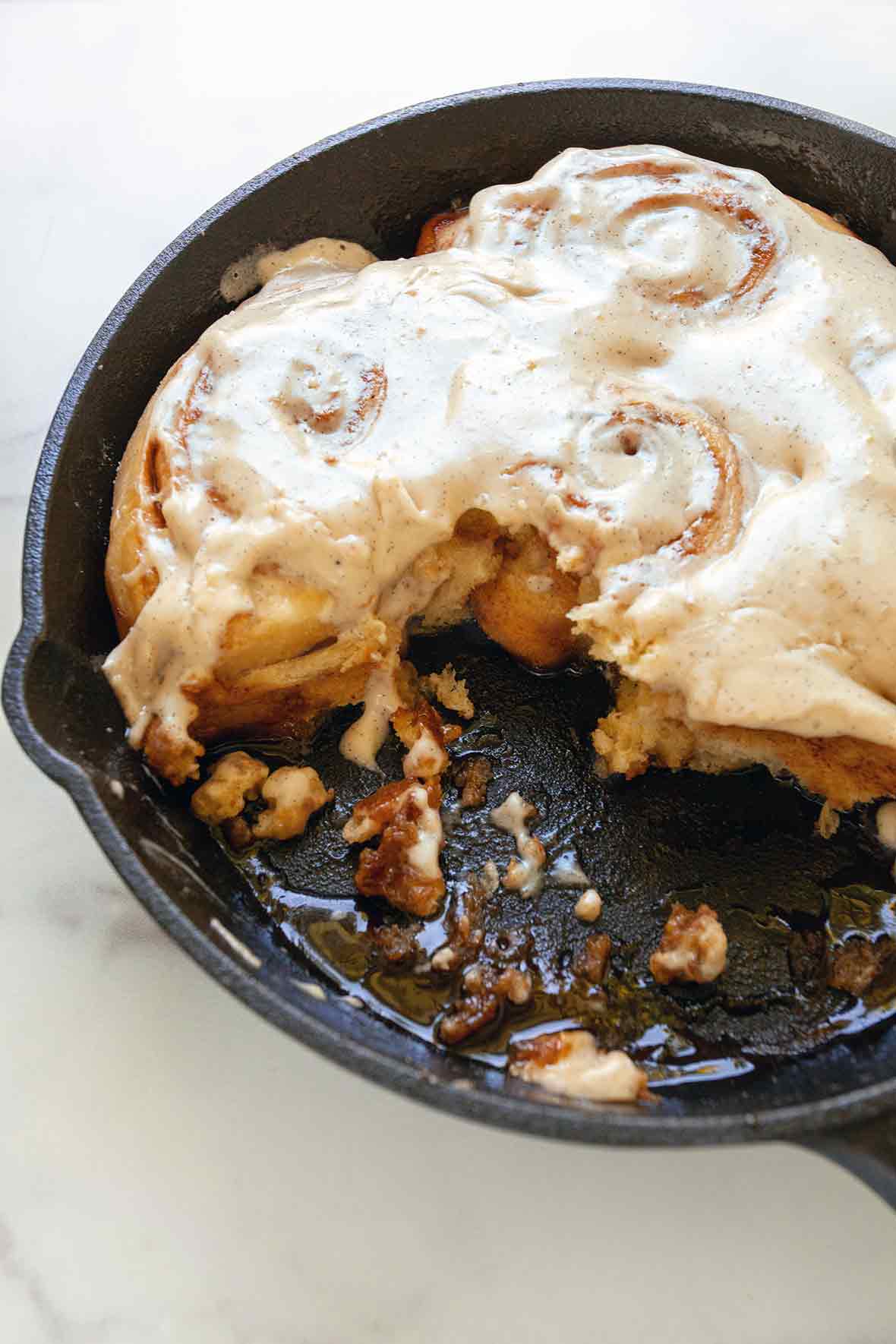 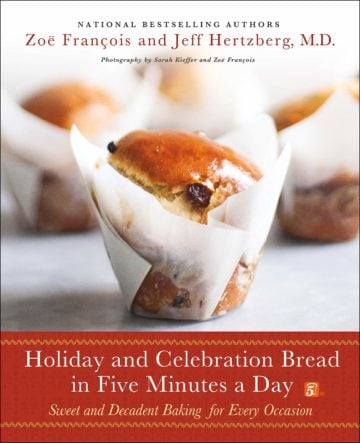 Make the brioche dough
In a 6-quart (6-liter) bowl or other large container, or in the bowl of a heavy-duty stand mixer, dump all the ingredients in the order listed.
Using a spoon and strong biceps or the paddle attachment of the stand mixer, blend in the flour until combined. (If you’re not using a mixer, you may need to use wet hands to incorporate the last of the flour.) Don’t try to work with it at this point.
☞ Tester tip: The dough will be a little loose and sticky but don’t worry. It will firm when it’s cold.
Loosely cover the container and let it rest at room temperature for 2 hours.
Refrigerate the dough until it’s thoroughly chilled, at least 3 hours. (You can refrigerate the dough for up to 5 days.)
Make the skillet cinnamon roll(s)
Generously butter an 8- or 9-inch (20- or 23-cm) cast-iron skillet.
Dust the surface of the refrigerated dough with flour and cut off a 1-pound (455-g) piece of dough. Return the rest of the dough to the refrigerator and use within 5 days.
Place the dough on a lightly floured surface and quickly shape it into a ball by stretching the surface of the dough around to the bottom, rotating the ball a quarter-turn as you go.
Roll the dough into a rectangle roughly 9 inches by 12 inches (23 by 30 cm) and 1/4 inch (6 mm) thick, using just enough flour to prevent it from sticking.
Brush the melted butter over the entire surface of the rolled dough. In a small bowl, mix together the sugars, salt, cinnamon, and orange zest. Evenly sprinkle the mixture over the butter-topped dough.
For one giant skillet cinnamon roll (pictured), use a sharp knife or pizza cutter to cut the dough lengthwise into 1 1/2-inch-wide (40-mm-wide) strips. Roll one of the strips into a tight coil. Place the coil on the end of the next strip and roll that strip around the coil, connecting the two ends together. Repeat with the remaining strips of dough until you have a giant coil of dough. At some point, you will have to lay the coil down on the work surface and wind the dough around it, or it will get too large and unwieldy. Use a large spatula to set the entire coil into the buttered cast-iron skillet. Cover loosely with plastic wrap and let rest at room temperature for 75 minutes.

For several smaller skillet cinnamon rolls, start at the short end and roll the dough into a log. Using a sharp knife or pizza cutter, cut the log crosswise into 6 equal rolls. Arrange the rolls inside the buttered cast-iron skillet. Space slightly apart for rolls with crisp edges, if desired, or nestle together for softer rolls. Cover loosely with plastic wrap and let rest at room temperature for 75 minutes.
Preheat the oven to 350°F (180°C).
Bake the cinnamon roll(s) until golden brown and set in the middle, about 25 minutes. To test for doneness, you’ll need to use the tip of a knife to probe a little into the center between the rolls. Let the roll(s) cool in the skillet for 10 minutes before icing.
Make the cream cheese icing
Place the cream cheese in the bowl of a stand mixer fitted with the whisk attachment and mix on low speed until smooth.
Add the confectioners’ sugar, 1 tablespoon cream, vanilla, and orange zest and whisk until well combined. If the icing seems too thick to spread, dribble in a little additional cream until the icing is still thick but spreadable.
Serve the cinnamon roll(s) straight from the skillet or, if desired, transfer to a platter. Slather the cinnamon roll(s) with the cream cheese icing and, if serving the single skillet roll, slice it into wedges. Watch it disappear. Originally published March 30, 2019.
Print Recipe

A skillet full of cinnamon, buttery, flaky goodness. The addition of orange zest provides a bright zip to the cinnamon sugar and everyone in your house will be smiling.

I made this for an afternoon treat but it could make this a day ahead and left to slowly rise in the fridge overnight to serve for breakfast or brunch.

Crusty golden rolls with a lovely, soft interior. Sweet cinnamon with the citrus zest gave the rolls a wonderful warm flavor. And the icing gave them a super indulgent feel. The brioche turned out beautifully in the rolls with a soft buttery texture and airy layers.

The dough was extremely easy to work with—to make and to roll out and to form into a ball with just a few turns, as per the directions. I used a stand mixer with paddle attachment to mix the dough and it rolled out nice and smoothly and was simple to spread the butter and sugar mixture. I cut it into 6 equal pieces and placed them in a 9-inch inch square baking pan. They had lots of room to rise and were doubled after the 75 minutes. They were done baking after 25 minutes and were a nice golden caramel color. There was lots of space in the 9-inch pan so the edges of the rolls had a nice crusty exterior. If you want softer rolls, a smaller pan would work.

I made the dough one day and then prepped the rolls the following morning. I used the rest of the dough to make monkey bread and a simple loaf. It turned out beautifully with some melted butter and a sprinkle of sea salt on top.

I made the roll twice—one Cinnamon Roll and one Chinese Five Spice Roll—and both times used the brioche dough. In both recipes, I used my 8-inch cast iron pan, light brown sugar and organic oranges however I used two different cream cheeses which did have two different results.

I found the instructions to be pretty precise, however, when it came time to cut the dough to 1 ½ inch strips I wasn’t sure if you did that from the 9 inch side of the rectangle or the 12 inch. When I made the Cinnamon Roll I did the strips from the 12 inch side so they were 9 inches long and that seemed to give me a better looking roll for some reason. When I did the Chinese Five Spice Roll I cut them the other way and I found it a bit difficult to coil because the strips were so long. When making the coil it did get big and hard to keep coiling so I put it in the pan and picked up a strip however the sugar topping just came off so I just stuck with rolling the coil while the strips were on the counter even though it was a bit tricky. The instructions for coiling the dough did make sense but the picture of the recipe also helped (gave me a visual).

During both makings of the rolls the dough did rise while resting for the 75 minutes however the second time (Chinese Five Spice Roll) it didn’t rise as much. I’m not sure if that’s because the dough had been stored in my fridge for three days at that point whereas the Cinnamon Roll was made within hours of the dough being ready to use.

For the icing I used two different cream cheeses. For both icings I used a whisk to create the cream cheese icing and I had a different experience with both cream cheeses. For the Cinnamon Roll I used original Philadelphia brand cream cheese and it was perfect. It had the perfect texture for a cinnamon roll. It was slightly thick and sticky. For the Chinese Five Spice Roll, I used an organic cream cheese (full fat) and it didn’t work out. The icing was way too watery/loose and wasn’t the least bit sticky. Next time I’m making this recipe I will definitely be using Philly as it was the perfect cream cheese to use.

I loved the flavour of both rolls. The orange zest worked really nicely with both the cinnamon and Chinese Five Spice. I can't wait to make this again.

I used the white bread dough recipe and it came together easily as described. It took about 30 seconds in my stand mixer for the dough to come together. I let it rise in the 5 qt mixer bowl and it did rise above the top, but not by too much.

Back to Skillet Cinnamon Rolls on Leite's Culinaria