This Instant Pot chicken gumbo is a comforting one-pot meal made with chicken thighs, andouille sausage, peppers, tomatoes, and a truly Creole blend of spices. It can also be made in the slow cooker.

There’s really no reason to not make this chicken gumbo. It’s a comforting, satiating, one-pot dinner loaded with chicken, sausage, peppers, and tomatoes with a spicy (but not too spicy) Creole accent that can be made in less than an hour in your pressure cooker or Instant Pot. Or you can simply let it simmer all day on the stovetop or in the slow cooker.–Angie Zoobkoff 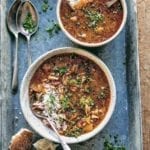 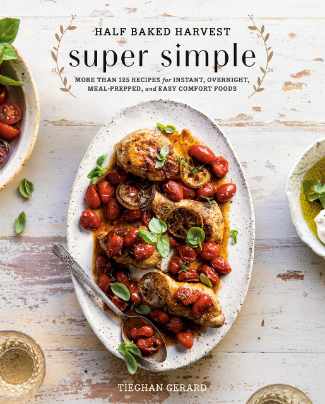 How To Make This In Your Slow Cooker, Pressure Cooker, Or Instant Pot

Wow. I do not claim to be a gumbo expert; nor have I made it before, but this was really slurpable. This gumbo was very enjoyable, especially for the minimal work put into it. It had great smokiness and levels upon levels of flavor. I love how the heat or burn is slow and creeps up on you in the back of your throat.

The Creole seasoning plus the 1 teaspoon of cayenne and the chili powder were perfect for me–it wasn’t necessary for me to go to 2 teaspoons. I used really good chicken stock from the butcher shop with lots of gelatin, so I’m sure this added to the silky richness of the stew.

I also liked that this gumbo did not turn out super thick and that it was not in the least gummy. I cooked my roux to a penny color. I’ve heard the darker the better for roux, but I didn’t want to push it too far and burn it. I was therefore careful with the heat and initially had it on medium and then slightly lowered the heat toward the end. I also kept stirring pretty regularly.

The peppers became very sweet and pleasant through slow cooking—I’m glad that the gumbo recipe didn’t use green pepper, as they’re too bitter for my liking.

Everything went into my slow cooker on high for 6 hours and this timing was just right. We are very much looking forward to eating this for a few days!

I’m not an experienced gumbo maker or eater, but if this is what it’s supposed to taste like, then I see a lot more gumbo in my future. The layers of flavor in this dish are endless and the result is a truly soul-satisfying meal.

I used the stove-top method. This made a LOT.

I made this recipe in my Instant Pot and you would never know I didn’t cook my roux low and slow on the stove. I loved the flavor of this gumbo but the others said they wish I had used less cayenne pepper (I only used 1 teaspoon).

I was a little concerned about the bell peppers being sliced instead of diced. I had visions of trying to eat long strips of pepper but they cooked down and were perfect. I felt it took longer to get everything prepped than it took to get it going in the Instant Pot.

I did the slow cooker method and by the time the gumbo was ready, my kitchen smelled absolutely wonderful and we couldn’t wait to dive in. We were richly rewarded. Having cooked all day, the gumbo had layer upon layer of flavor and the chicken thighs and andouille added just the right amount of body and oomph. There was a nice amount of heat but not so much as to send us running to the fridge for milk.

Aside from chopping the veggies, the recipe was crazy simple. Next time I might saute the meat before dropping it into the slow cooker to give it a little crisp. Especially the sausage. I’d never made a roux with oil before so I was curious how that would turn out and it was fine.

The gumbo was thick and just so flavorful. I’ve never been to New Orleans but when I imagine what chicken gumbo from there must be like, this is it.