This panko crusted pork tenderloin with rosemary borrows an approach commonly taken with lamb and steals its glam. It’s the sort of simple dish that looks (and tastes!) like you spent all day preparing it but, in reality, requires only a handful of pantry ingredients and is completely doable on a weeknight. (Especially if you keep a tenderloin in the freezer.) Don’t worry. This can be our little secret.–Angie Zoobkoff 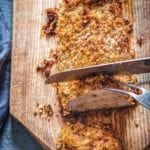 This panko crusted pork tenderloin with rosemary is an easy entrée made by brushing pork tenderloin with Dijon mustard, then coating in a mixture of panko, garlic, and rosemary. Simple enough for a weeknight yet elegant enough for entertaining.
Prep 15 mins
Cook 30 mins
Total 45 mins
Mains
American
4 servings
293 kcal
5 / 2 votes
Print Recipe 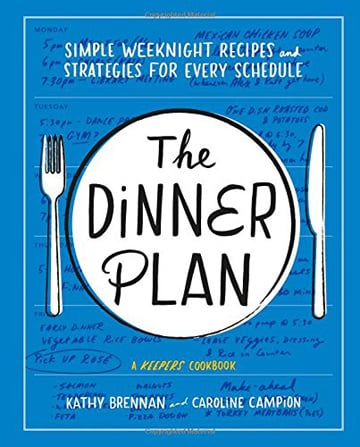 Love the look? Click to bring the LC Lifestyle into your home. Carving Board by Architec Carving Knife by BergHOFF

Delicious. Pork, mustard, garlic, and rosemary make for a delightful combination of flavors. While it’s an expensive cut of meat, pork tenderloin this good is a worthwhile treat. It’s also a lean cut and cooks fairly quickly, so dinner can be on the table in under an hour from start time.

The mustard coating and breading are wonderful pork-friendly flavors and help keep the meat tender and moist.

I used whole wheat homemade bread crumbs and fresh rosemary. I wasn’t sure which side was the top vs. bottom of the pork after coating, since I hadn’t noted where the fat was and the surface was then covered. I decided based on which side seemed naturally like the one to have the tail tucked under it.

When I first checked on the temperature after 15 minutes, the bread crumbs on the top were burning, so I turned the meat over with tongs, which caused some crumbs to come off. Otherwise, the crumbs adhered well. The crumbs also began to burn on the second side after the meat had been turned. The burning was not serious enough to be a problem but probably would have been if the pork had stayed in the same position for the entire cooking time.

I used an overproof skillet with foil, and it was, indeed, very easy clean-up.

Despite the extra time in the oven, it was not overcooked and still had the slightest hint of pink in some of the pieces after the resting time and slicing.

This was served with three-cheese mac and cheese studded with ham.

This roasted pork tenderloin is a great option for a quick weeknight meal that tastes like it takes a lot longer to prepare than 30 minutes. The Dijon mustard and the rosemary give the pork a lot of flavor with little effort.

I chose to use panko and loved the final crunchiness. It’s a little messy to coat the pork with the mustard, so keep some paper towels close at hand. I used dried rosemary and it was good, but I think that I’ll try fresh next time. The best thing about this recipe is that I tend to have these ingredients around on a regular basis, so it’s easy to incorporate into my regular repertoire.

I served this with roasted potatoes and sauteed random farmers market squash. Afterwards, I thought how delicious it would be with the Glazed Turnips and Apples recipe that’s on the site!

This roasted pork tenderloin is a recipe that can really elevate a weekday dinner to elegant status by creatively using just a few classic ingredients that you probably have in the house already. And when the herb crusted pork is cooking, the house fills with wonderful aromas of rosemary and garlic. There’s really nothing to it, just mixing up the herbs and bread crumbs, coating the pork tenderloin in Dijon mustard then rolling it in the herb and bread crumb mix. Voila.

Be sure to have your meat thermometer on hand so you cook it fully. That was the trickiest part: even though I folded the skinny end under, that part cooked much faster than the thick end, which took about 30 minutes. Even so, the thin end didn’t dry out.

This was fantastic and my entire family proclaimed it a Tester’s Choice! I’ve treated both lamb and beef similarly, but had never thought to use the same method with pork. But I certainly will again in the future.

The panko mixture stuck to the pork easily, though I’d recommend using a wide bowl to make it easier to stick the pork in there and get the panko on.

Pork tenderloin is a great beginning for so many simple treatments, and I thought I had tried most ways to prepare it, but I had never tried a panko crust like this. This is a great weeknight or spur of the moment recipe and since pork tenderloin is easily available, and containing 2 to 3 in a package unless you’re buying directly from a butcher, you can be smart and keep them on hand in your freezer as suggested.

I made this once plain and a second time roasted over cannellini beans and tomatoes. Both were very good, and the beans made for a complete entree. The only thing commented on was maybe the rosemary and garlic were a bit too generous so I reduced it a bit for the second version.

If you have leftovers, wrap it up and refrigerate it for sandwiches (it worked very nicely along with some country pâté and pickled carrots and cucumbers for a Bánh mì). Although the crust doesn’t remain crisp, it’s still tasty.

Don’t worry if your Dijon has whole grains or not. I used Fallot Old Fashioned Grain Dijon Mustard for the first version because that was all I had on hand. After a grocery run, I used Fallot Burgundy Mustard for the second. I slightly prefer the texture that the whole grain added, without being too noticeable, and I think it was easier to use as it was slightly thicker and didn’t slip off the tenderloin as I spread it. I also found placing the panko and herb mixture in a wide bowl made it easiest to roll around and get an even coating.

If you are looking for a simple fall or winter dinner, this is it! I found this recipe so quick and easy to put together and delicious. I wouldn’t change a thing. You can even prep it ahead and leave it in the refrigerator until you’re ready to roast it. I served the pork with rice pilaf and roasted butternut squash.