This version of huevos rancheros, the traditional and easy farm-style Mexican breakfast, is made with everyday ingredients including corn tortillas, homemade enchilada sauce, fried eggs, Cotija cheese, and fresh salsa. 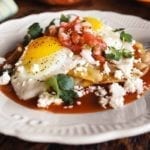 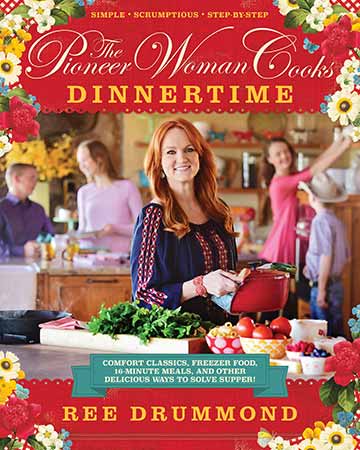 For the enchilada sauce

For the huevos rancheros

I think that many people would want to make huevos rancheros, wouldn’t know how to, and would like to have a simple recipe to help them get it on their plate.

The most time consuming part of this recipe is making the enchilada sauce. I made the sauce the day before I wanted to eat the huevos. That makes a good breakfast something that you can have on the table in about 5 minutes. I heated the enchilada sauce in the microwave while I was cooking my eggs, poured half the sauce on the plate, put the corn tortillas down, poured the rest of the sauce over the tortillas, and then slipped the sunnyside-up eggs, 3 for the 2 of us, on top of the sauce. A done deal.

I wasn’t thrilled with the enchilada sauce the morning after I made it, but it is growing on me, which is a good thing, because I have 2 1/4 cups leftover. I will seal it in 1/2 portions and freeze it. I served some of it with some leftover chicken and that was very good.

For the enchilada sauce, I used the chili powder in Rob Walsh’s Chili con Carne recipe that is on the site. A fabulous chili powder recipe. An even better chili.

I cooked my corn tortillas using my tried-and-true method. I heat up a very well-seasoned cast iron frying pan until very hot, place a corn tortilla in the cast iron pan until it’s lightly “toasted,” and then I turn it over. Repeat with the second tortilla.

I served the huevos rancheros with my “house home fries,” or chunks of crisp browned potatoes with chopped onions and, this time, a little bit of leftover red pepper and Mexican chorizo that I had taken out of its casing and cooked in a cast iron pan. Great, great sides to this dish!

While I was apprehensive about using enchilada sauce instead of ranchero sauce for huevos rancheros, the sauce itself is quite good and changed my mind. I don’t imagine that I’ll abandon the chunkier, non-flour-thickened ranchero sauce for this one, but having this versatile enchilada sauce on hand makes it easy to cook up all manner of foods, including eggs, into a meal with a spicy kick. I might even use some to make enchiladas!

I prefer heating the tortillas without as much oil as this called for, but we quickly made a second round of these and that ended up using the remainder of the oil in the pan. Heating the tortillas in the microwave would also be a good option for avoiding oil.

We ate these with some leftover chicken and pinto beans. I used a prepared Frontera tomatillo salsa to finish the dish, liking the contrast with the red enchilada sauce.

Huevos rancheros was the perfect meal for one or two very small eaters! When you have the homemade enchilada sauce waiting in the refrigerator, it’s a great and speedy weeknight meal.

We actually preferred having 2 eggs for each of us. We used store-bought salsa from the refrigerator. We topped everything with a dollop of sour cream and more cilantro.

The homemade enchilada sauce was pretty straightforward and I did use an immersion blender. I used my homemade chicken broth. I’ll double the recipe next time to have it on hand.

This was a comforting meal that I’ll be making again. I may try doing the tortillas in the microwave next time to speed up the process.

As quick as you can cook an egg, you can have this lovely spin on breakfast.

This dish was so good. I could eat it every day. The recipe for the enchilada sauce is simple and produces a sauce I’d like to have in my fridge all the time. I could have eaten it with a spoon.

I used 1 tablespoon pasilla powder and 1 tablespoon traditional chili powder. I used an immersion blender to puree the peppers and onions in the sauce. This took about 2 minutes. Frying the tortillas took a little more time. Each tortilla took about 2 minutes to cook until crisp. Once the tortillas and the sauce were ready, it only took 4 to 5 minutes to assemble the huevos rancheros.

Since it was dinner, we each had 2 huevos rancheros each. It was a filling dinner. I could see limiting myself to 1 for breakfast.

Make the homemade enchilada sauce! Make it! It’s worth it, it’s easy, and it makes the difference between a fine recipe and a great meal. So yes, this is very good recipe for any meal of the day and a perfect example of this classic southwestern dish.

The tortillas needed more than 45 minutes to get crispy, closer to 1.5 or 2 minutes total. They also benefited from multiple flipping since they tended to puffup in the middle. If you do not flip often, the middle will be underdone.

This really is a serving for one. I suppose if it is part of a multiple course meal it could serve two.

I made my own chili powder using a recipe I like that uses ground guajillo chiles, cumin, garlic powder, and oregano.