This vinegar-glossed chicken is made with inexpensive bone-in chicken pieces, rosemary, and garlic, and relies on red wine vinegar to deglaze the pan and create a spectacular sweetly sour pan sauce.

This dish has been in heavy rotation in our home for at least 20 years. Originally made from an Italian recipe, it has morphed into our own. When the rosemary and vinegar are added to the pan of chicken, alchemy occurs. The vinegar deglazes the brown bits and reduces into a syrup, permeating the chicken with an agrodolce (sweet and sour) flavor. The dish is even better the day after it’s made.–Lucinda Scala Quinn 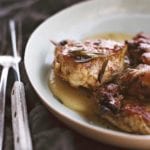 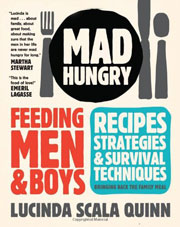 We really liked this dish. It definitely fed men and boys, which is a big plus as far as I’m concerned. It was also delicious, another big plus.

I did kind of wish there was more sauce in the end because the sauce was so, so tasty. But that could easily be remedied by doubling the sauce recipes. (We’re a big sauce family.)

I would actually try this same dish with boneless, skinless chicken breasts when I’m pressed for time, which is just about always. I think it could be equally great that way.

If you need something to call your guests to the table, just let them inhale this enticing aroma! They won’t be able to resist. This chicken is flavorful, lovely to look at on the plate, and even better in the mouth. The red-wine vinegar infused with some garlic and fresh rosemary would be good on just about anything, and on this chicken it is perfect. There’s just enough zing to bring out the great taste of the cooked chicken that’s still juicy and moist inside while retaining some degree of crispness on the outside.

You won’t be disappointed. It’s an ideal recipe for a dinner party—the smooth, vibrant taste of the dish will elevate the entire evening.