These orange ginger chicken thighs are an easy meal made by marinating chicken in a mixture of ginger, oranges, and soy sauce, then roasting to crispy-skinned perfection.

This is not the orange ginger chicken that’s an Americanized riff on Chinese food that comes in a white box with rice on the side. This is a surprisingly simple marinade that lets you toss an orange and some ginger root in a blender–peel and all–along with a little soy sauce and ginger. So unexpectedly easy. So impressively good.–Renee Schettler Rossi 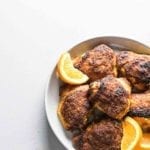 These orange ginger chicken thighs are an easy meal made by marinating chicken in a mixture of ginger, oranges, and soy sauce, then roasting to crispy-skinned perfection.
Prep 20 mins
Cook 50 mins
Total 2 hrs 10 mins
Mains
American
4 to 6 servings
739 kcal
5 from 1 vote
Print Recipe 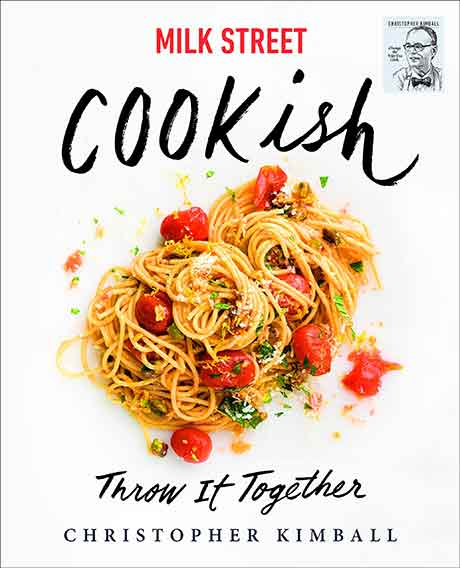 This recipe was a winner through and through. The thighs turned out moist and delicious and they browned beautifully. The ginger-heavy marinade produced a delightful, tingly spicing. It amazed me how much the ginger flavor from the marinade came through but then again 7 oz is a whole lot of ginger root!

Skinless boneless thighs seem popular with contemporary recipe writers, but I personally prefer chicken that hasn’t been skinned and deboned. The flavor is far more complex when the chicken is cooked intact.

The marinade was very thick and had a lot of texture, presumably from the ginger and orange. I have an ancient blender so things don’t get pureed as finely as they would in a Vitamix or other newer, high-powered blender. From the description of marinade clinging to the chicken, I gather that the texture I got might not be what was intended, though it worked out just fine.

I try not to eat too much chicken skin, but I couldn’t help myself with this on the plate. It was hard to limit myself to only one piece of chicken, period.

When I peeked, the chicken looked gorgeous as it was baking. Using foil on the pan was a good idea that I, unfortunately, rejected. That brown sugar left quite a blackened crust on the pan. I should have turned the pan in the oven partway through, as well, as the browning was somewhat uneven front to back on the racks. I did turn the pan front to back and side to side before turning the broiler on, and the coloring pretty much all evened out during that final step.

For probably the first time ever, my result didn’t look like the photograph only because mine looked better. I served the chicken along with a combination of fried rice, green beans, and broccoli.

When I think of “orange ginger chicken”, the Chinese takeout staple that kept me well-fed during my college days immediately comes to mind. Along with white rice, the sticky, overly glazed, perfectly fried, meaty chunks I’m accustomed to could feed a family of four. I, however, would be determined to eat it all in one sitting because my dorm lacked a working microwave and oven. The good old days!

This…is not that. Instead, this modern reimagining takes flavor inspiration from my young adulthood staple and the classic chicken a l’orange, plus some extra texture and juiciness from the superior chicken thigh and full-bodied marinade.

When making the marinade, I was initially thrown off by keeping the skin on both the orange and ginger. Strangely, though, I could barely tell I kept the peel on both in the final product. My boyfriend, the pickiest of eaters, could identify the pithiness from the orange, though. This texture may be offputting to some, so it might be worth considering whether the marinade could be better translated as a sauce or glaze.

The chicken itself is pretty damn good with the thigh meat being extremely juicy and some of that tangy marinade flavor being absorbed into the thigh. But it could be truly perfect with a few tweaks. First, I found that the thighs with more marinade ended up a little burnt than the rest, especially after it came out from under the broiler. Even with that extra char, I didn’t find the skin to be all that crispy. If it was under the broiler’s flames for another minute or two, I think it’ll have the texture I was initially envisioning it having.

I only had regular soy sauce on hand, so I cut the amount down by a third. And instead of using a large bowl, I marinated the chicken in a large freezer bag to consolidate space in my fridge.

This chicken is moist and flavorful. The aroma of orange and ginger fills the kitchen as the chicken approaches doneness. The prominent taste are those of orange and ginger with the soy sauce adding a background flavor that holds it all together while the brown sugar adds a bit of sweetness and helps the crust to brown.

My family enjoyed this chicken dish but we all felt that the ginger taste overshadowed the other tastes as the dominant flavor. Were I to make this again, and I will, I will cut down on the amount of ginger. I think the ginger could easily be halved and the flavor of the ginger would be a nice complement rather than the dominant flavor. I also found the sauce to be very thick. This kept the chicken moist, but the sauce never allowed the skin to crisp. Rather, the sauce crisped on the outside, but was soggy on the inside. I will use a lighter layer of sauce next time to avoid the soggy layer.

I served this with ears of corn and a simple salad.

The seven ounces of ginger in this recipe were the biggest surprise for me. I don’t think I’ve ever prepared a dish that called for that amount, but the end result was moist, flavorful chicken with really crispy charred skin that wasn’t overpowered by what I expected to be the dominant ingredient. Instead, the ginger harmonized beautifully with the soy sauce, orange juice and fruit, and the brown sugar.

And I was surprised and impressed that I wasn’t required to peel, grate, and/or chop the ginger. It made the marinade a breeze to prepare in about 20 minutes (yes, there is some slicing involved). At that point, it’s simply a matter of coating the chicken and then letting it marinate in the refrigerator. I went for the full 24 hours and though I’m not sure it made an enormous amount of difference in the flavor, there is definitely something to be said for taking a little time during the day for prep and then forgetting about it until you’re ready to cook. Preheating the oven, lining a sheet pan with tin foil, and putting the chicken on the rack and into the oven was all the subsequent effort required.

The chicken needed just 35 minutes to reach 170°F, at which point the skin was a deep mahogany color that was enhanced with another 2 minutes under the broiler. Another thing we loved about this dish were the bits of marinade that clung to the skin and got caramelized during roasting.

With a two-person household, the just under 2 lbs. of chicken was enough for 6 servings over several days, served alongside a tomato salad with a tamarind dressing on one occasion and a simpler green salad after that. Delicious!

This is a very simple recipe. The marinade itself is special and we surely will make it again and we will keep it in a jar for a sauce to use over rice or vegetables or maybe to bake fish.

Before we started, we set the ginger in a bowl of warm water to clean well between the creases. (Note: 7 ounces is a lot of ginger. Be sure to buy more than you generally might.) We made the marinade in about 10 minutes, covered the chicken in a glass bowl, and let it sit in the refrigerator overnight. We baked for 45 minutes, and broiled for 4 minutes. Be sure to line your pan well so it’s covered with foil—the sticky sauce will bake onto your pan if there is a leak, and it is a bear to get off.

Though the skin didn’t crisp the way we thought it might, the chicken is tasty, and the method is easy. We served with short-grain brown rice and steamed vegetables for a fine meal.