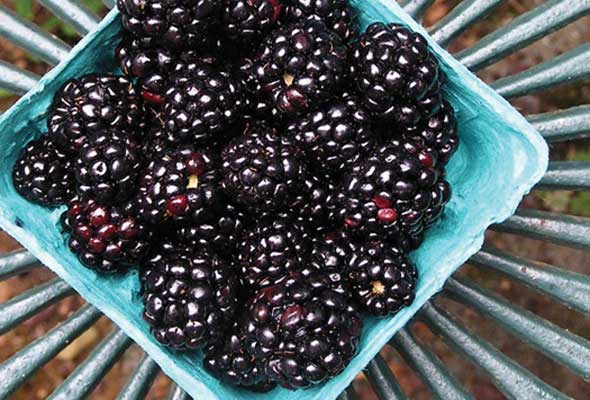 Late summer is berry time in the Hudson Valley and, naturally, it’s also ice cream time. Ages ago, after harvesting lots of wild blueberries on High Point Mountain in the Catskills, I made my first batch of blueberry ice cream. The flavor was so-so, but the color was a ghastly bluish gray—so depressing, I wouldn’t even consider trying again.

A few years later, I ordered some blueberry pancakes at a truck stop in Texas, and was horrified to see that berries had been ground up in the batter and—worse—that the pancakes themselves were turquoise.

Then I remembered something from high-school chemistry. Do you recall those little strips of litmus paper? The ones that turned red in acid, but blue in alkaline liquids? Those test strips worked because they were impregnated with a vegetable pigment call anthocyanin, and anthocyanin is pH sensitive. That pigment is responsible for virtually all the red, blue, and purple fruits, vegetables, and flowers.

I began to suspect the cause of my ice cream failure, and started thinking of a solution to the problem. I could have added the berries when the ice cream was almost set, but the berries would be as hard as gravel and contribute no flavor to the ice cream itself. However, by lowering the pH (making the mixture more acidic), the resulting color could be improved and the acid might just perk up the berries’ mild flavor at the same time. A small amount of lemon juice was just what was needed.

Every year since then, I’ve been serving deeply colored and full-flavored ice creams that are the very essence of the season. The following recipe uses blackberries, but it would work equally well with blueberries or raspberries.

Combine the berries, sugar, lemon juice, and water in a saucepan. Bring the mixture to a boil, then turn down the heat and simmer until all the juices have been released and the mixture has thickened, about 10 minutes.

Force the mixture through a strainer, to remove all the seeds, and cool thoroughly.

Combine the berry mixture with the milk, cream, and vanilla and chill thoroughly.

Stir to remix evenly, then freeze according to the ice cream maker manufacturer’s instructions. Pack in containers and place in the freezer until firm–or until you can’t stand to wait any longer.