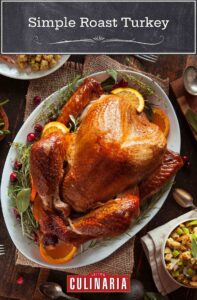 Simple roast turkey is an easy way to cook the perfect bird for Thanksgiving. And by that we mean the best, most juiciest roast turkey imaginable. A failproof technique, even for beginner cooks.

Simple roast turkey. It sounds sorta too good to be true, yes? And yet we’re here to assure you, from our own experience as well as that of the venerable Barbara Kafka, that it is possible. And easy. And juicy. And quite possibly the best damn turkey you’ve ever experienced. Without further ado, here’s how to cook the perfect turkey.–David Leite

Our testers couldn’t believe how quickly this oven-roasted turkey was ready. They were delighted that it could be cooked so fast, yet still turn out juicy and tender with crispy, golden, skin.

What size turkey should I buy?

We go out of our way to seek out a 12- to 14-pound turkey not only because that’s what fits readily in our roasting pan but because it cooks in a modest amount of time. Turkeys that are larger tend to cook more unevenly because by the time the dark meat is properly cooked, the leaner white meat tends to become dried out. When we need to feed a crowd, we simply snuggle a couple 12- to 14-pounders side by side in the roasting pan, turning them to face the short side of the pan.

That said, no matter what size your hen, you’ll get superior results if you blast it at high heat, as in the recipe below, than if you use a lower temperature. Check out this handy roasting chart for approximate roasting times for a variety of weights.

Do I need to baste the turkey?

No. Since this turkey is roasting at a high temperature, you want to keep the oven door closed as much as possible. Basting the turkey will only result in lost heat, meaning that the turkey will take longer to cook, and possibly end up dried out.

How long does it take to thaw a frozen turkey?

Allow 24 hours for every 4 pounds of turkey. If you’ve got a 12-pound turkey, you’ll need to move it to the refrigerator at least 3 days before cooking.

How can I tell when my turkey is done?

The turkey is ready when a meat thermometer inserted into the thickest parts of both the thigh and the breast (without touching the bone) registers 165°F (74°C).

What should I serve with this roast turkey?

Any of our Thanksgiving side dish recipes would be welcome here. Some of our favorites include pumpkin mashed potatoes, bread stuffing with bacon, apples, and onions, cranberry and orange relish, pan-fried green beans and almonds, and candied sweet potatoes. 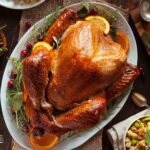 Simple roast turkey is an easy way to cook the perfect bird for Thanksgiving. And by that we mean the best, most juiciest roast turkey imaginable. A failproof technique, even for beginner cooks.
Prep 15 mins
Cook 2 hrs 15 mins
Total 2 hrs 30 mins
Mains
American
10 to 15 servings
570 kcal
5 from 1 vote
Print Recipe 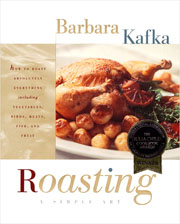 Holy Incinerators, Batman! This method of roasting turkey is spectacularly effective. Two hours! If you’re a fan of deep-fried turkey, this is as close as you will come without setting your garage on fire. It is sooooo good.

My only concerns are these: feet first? The result of that was burnt legs! BUT I will make this again—really, really soon—and this time around I will change the orientation of the pan after the first 20 minutes. My oven can accommodate a pan going in with the turkey sitting sidewise and that is how I usually do it. I will also add some of the usual stuff to the cavity of the turkey, like garlic, celery, onion, and some other things.

And with your own personal treatment with spices and herbs, it will be fantastic! Go ahead, oven at 500°F, I dare you! Ready, set (the timer, that is, under 2 hours for an almost 11 pounder) and set the table! Turkey done.

This simple turkey recipe is a definite keeper. To be able to roast a turkey in about 2 hours, even if stuffed, is wonderful. I have a similar recipe for oven-blasted chicken, so I was familiar with this concept.

I found the timing in the recipe to be pretty spot on; my bird weighed in at 10 1/2 pounds and it was done in 1 hour, 15 minutes—even though the pop-up timer never popped. To be certain, I double checked the internal temperature of the bird (it was 172°F) as well as wiggled the leg joint to see how loose it was.

After resting, the bird carved beautifully and the breast was still very moist, even though I didn’t brine it like I normally do. One thing I did find was that the skin and outer layer of meat on the legs was really too dry and tough to eat; however, the rest of the leg meat was fine.

One of the things I would do the next time is to wrap the ends of the legs with foil to prevent them from becoming overcooked. I would also consider rotating the pan after the first 20 minutes so the breast is toward the back of the oven for the next 20 minutes, and then rotate the bird again so the legs would be to the rear for the remaining cooking time.

This was my first time to use a high-heat method for roasting turkey. The past few years, I’ve used an electric roaster for my turkey. I’ve preferred this method because it frees my oven and produces consistently moist meat. I didn’t think I would ever go back to cooking turkey in the oven, but this technique may have changed my mind.

I used a 15-pound turkey, stuffing the cavity with a few stalks of celery, an onion, some garlic cloves, and a few sprigs rosemary. It took about 2 1/2 hours to get to 165°F, and the heat created beautifully crisp—but not burnt—skin. It was so pretty!

Meat was moist, too, though on the bland side. I would do more than just pepper next time, maybe making an herb butter to slide underneath the skin as I usually do. Now…what to do with the leftovers??

I’ve always been leery to roast a turkey in the oven, as in the past mine would always come out dry and tasteless. So for quite a few years now we’ve smoked them.

Though last Thanksgiving, I was in a predicament. My younger daughter’s teacher asked if I could bring a turkey to their feast. I decided to try this recipe as it seemed fast—something I could quickly do after dropping off the girls at school. I came back home, put the bird in the oven, and still made it on time for the classroom feast.

What the heck was I doing wrong all those years before trying this recipe?! Seriously! Can a whole roasted turkey recipe be any easier or produce a juicier, tastier, more gorgeous turkey? The skin had the most amazing dark golden color, was perfectly crisp, and even the white meat was packed with flavor and natural juices.

It was a hit with all the kids, teachers and parents. It received countless praises and only bones were left. This is a recipe to keep in the repertoire and wow your family and guests.