Skip to content
Home » Recipes » Bread Stuffing with Bacon, Apples, and Onions
Shares307PinShareTweetYummlyShare on FlipboardEmailHeart this post
Jump to Recipe

This bread stuffing with bacon, apples, sage, and onions is classic Thanksgiving fare and can be cooked inside or outside the turkey.

To make this stuffing, you’ll need to first dry the bread. Spread the bread cubes out onto 2 large baking sheets and dry in a 300°F (150°C) oven for 30 to 60 minutes. Let the bread cool before using in the stuffing.–Editors at America’s Test Kitchen

This recipe turns out the stuffing of our dreams. Or at least the stuffing our day dreams, seeing as it’s the bread stuffing that we’d always imagined making in our Rockwell-ian musings about what Thanksgiving could be like. The pound of bacon may have something to do with it. But don’t make yourself wait for this storied stuffing. Try it tonight.

Bread Stuffing with Bacon and Apples 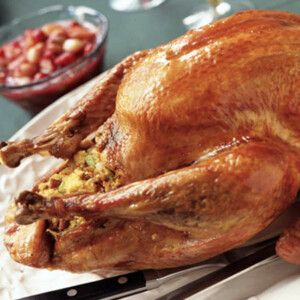 This bread stuffing with bacon, apples, sage, and onions is classic Thanksgiving fare and can be cooked inside or outside the turkey.
Editors at America’s Test Kitchen
Prep 25 mins
Cook 35 mins
Total 1 hr
Sides
American
12 cups
869 kcal
5 / 5 votes
Print Recipe 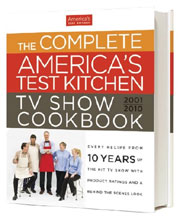 Bacon, apples, AND caramelized onions! I am total smitten with this bread stuffing. We enjoy bread stuffing throughout the cooler months, not just for the holidays, often with a roasted chicken or pork chops. So I thought I would try the recipe scaled back to yield only 4 cups, which is 1/3 the recipe.

I found no issues by reducing the yield, and in fact, 4 cups seemed like it would stuff a good-size turkey without having any leftovers to bake off on the side. Since some readers may shy away from preparing stuffing inside a bird, I also tested the recipe in a casserole dish. It became apparent that the amount of liquid in the original recipe accounts for how much more the liquid will be absorbed from the meat during roasting. If you choose to prepare the dressing on the side and not stuffed inside the bird, add 3/4 cup more broth during the last step for the full 12-cup recipe yield. I baked it, covered, in a 325°F oven for 20 minutes, then another 10 uncovered until golden brown. Super delicious!

This bread stuffing awakens memories of home and family. It’s easy to prepare, perfumed the house, and was even better to eat. I found that 2 loaves bakery bread gave me the 12 cups bread cubes, plus a little extra. I used only the 12 cups called for in the recipe. I did have to search for fresh sage but was finally able to find it. I think a suggestion for the use of dried sage would be helpful if fresh was not available. The apples added a nice sweetness to the stuffing and the bacon added a delicate smokiness. We baked this in the oven as we were smoking our turkey outside. I baked the stuffing with 4 turkey thighs on top to add that “stuffed turkey” flavor we all wanted. The end result was a stuffing that was moist, delicious, and brought back memories of past family gatherings. This recipe is a real keeper for the holidays.

This bread stuffing had all of the flavors of Thanksgiving rolled into one dish—all that was missing was the turkey. I have to admit, however, that I’m not a big fan of cooking stuffing inside of a turkey. So what I did was bake this in a 9-by-13-inch baking dish (rubbed with unsalted butter) as a dressing instead. I used day old French bread which was already good and hard. Since it was just the of us eating, I halved the recipe. I used about 3/4 cup chicken broth as opposed to the recommended 1/2 cup in the halved recipe version, and I used 2 eggs. I liked the sweetness of the caramelized onions, the saltiness of the bacon, the tart bite of the apple, and the earthy flavor only sage can impart to a fall dish like this. The only other thing I would recommend is that if you serve this as a dressing as opposed to a stuffing, for the liquid that you add to the bread mixture, maybe use half chicken stock and half heavy cream. I think that would give it an additional richness to hold it all together! I baked this as a dressing at 375°F for 50 minutes.

I loved the mix of flavors in this bread stuffing. Salty and smoky from the bacon, sweet from the apples, and savory from the onions. A truly well-rounded dish that would be a great side dish to any number of main courses, not just the Thanksgiving turkey. I baked the stuffing in a dish, not inside the turkey. I covered my dish with foil to retain moisture and removed the foil in the last few minutes to promote browning. Also, I added a bit more broth than called for since I thought it looked a little dry prior to finishing in the oven.