Those of us who grew up in rural parts are well acquainted with the long stretch of summer known as August, when parents were most likely to tire of our constant and cockamamie excuses to go to the amusement park or state fair. Despite the ample distractions at these annual destinations, the coup was really getting our greedy fill of cloyingly sweet, belly-achingly greasy funnel cake. Essentially glorified Dutch baby pancakes in the form of a doughnut, funnel cakes consist of batter drizzled around and around to dizzying effect in hot oil, sizzled till golden brown, and then—if the gods and the pimply teen with braces and hair net working the concession stand were smiling favorably upon you—snowdrifts of confectioners’ sugar and not a miserly sprinkle were dumped on the dripping hot fritter. Childhood on a paper plate. Eagerness often resulted in inadvertently snorting the white powder and, for a few endless seconds, choking, unable to breathe, witnessing your entire life, all eight summers of it, flash before your eyes. And then all was right with the world, due in no small part to the realization that you still had more than half your funnel cake to finish.–Kaye and Liv Hansen

Compared to the mass market cakes from decades ago, this gentrified funnel cakes recipe is not at all cloying, far less greasy, and only delicately showered with confectioners’ sugar. And yet it still manages to conjure memories. Lots of ’em. 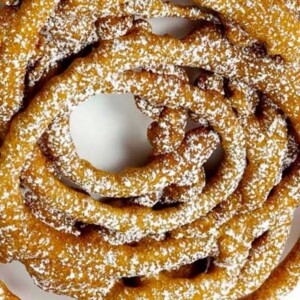 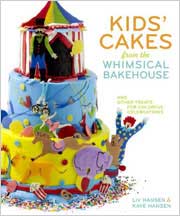 I had the granddaughters here visiting, so I couldn’t have found a better time to make this recipe. So easy, I just had to wait for the batter to rest for an hour. I haven’t had a funnel cake in years, so I can only go by the taste of this one recipe. I found it a fun thing to swirl the batter. I used a thermometer to make sure the temperature was just right. It cooks really quickly—the cakes were ready to flip in no time—and then we just drained them and sprinkled them with powdered sugar and ate them right then. The one I’d made earlier didn’t hold well; it started to get limp. And it really needed the powdered sugar, otherwise it missed something, either from not enough salt to heighten the flavor of the sugar or else it needed some flavor in combination with the vanilla. It may not be the healthiest thing to serve, but they more than likely won’t get this too often.

This recipe is so much fun for people who have kids that it’s definitely worth the effort of deep-frying. I would add a touch more vanilla, because it definitely took more milk to bring the batter to the right consistency. Also note that you may need to adjust the temperature of the oil as you go, in order to get it just right for frying. And I ended up using an actual funnel to make the cakes. I started with the measuring cup, which made too large a pour, and then switched to a squeeze bottle, which made too small a pour. Then I grabbed a funnel… and the pour was just right! It’s Goldilocks all over again.

I have fond, youthful memories of those Paramus Park funnel cakes. Unfortunately, the purchased funnel cakes of my adulthood have been disappointing—stale, bland, and cooked in oil that should have been recycled long ago. This funnel cake recipe has nothing disappointing about it. Quickly assembled from pantry ingredients, the cakes fried up in a flash, are crispy golden brown, and delicious when lightly dusted with confectioner’s sugar.