Stuffed sardines–sarde a beccafino–are a dish from Sicily that makes the most of finger-sized sardines by sandwiching them with a savory and sweet filling of raisins, pecorino cheese, pine nuts, and parsley. Little fishy sandwiches never tasted so good.

This classic Sicilian dish traditionally calls for rolling the sardines around the filling. I prefer my mom’s tactic, which sandwiches the filling between sardines. This means less fuss both in preparing and eating the dish, ensuring that the savory filling stays put rather than spills out.–Mary Ann Castronovo Fusco

This classic Sicilian sardine dish sorta sounds like something Tony Soprano would order at Artie’s restaurant, eh? The name just dances on the tongue. Sarde a Beccafico. Try it. It’s as easy peasy to say as it is to make. Truly. Not convinced? Take a twirl through author Mary Ann Castronovo Fusco’s article on sardines, which includes talk of cooking sardines. Then get back to us. 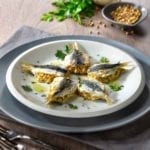 This is absolutely a recipe for a sardine lover. I was expecting this recipe to be less fishy than grilling sardines the traditional way, and oddly enough, that was not the case. The stuffing was simply amazing, and I would go as far to say to try it with salmon, pork chops, and so on. Now if you shine away from fish as-is, make sure to ask your fish monger to deal with all the hard work of cleaning the sardines. That will certainly simplify the process. Also, make sure to get medium- to large-size sardines so that the filling will work perfectly. I used small- to medium-size ones and had lots of filling left over. I served the fish with simple white rice sautéed with olive oil, onions, and parsley, and it was a perfect combination. Another thought I had would be to roll the sardines with the stuffing and then use a toothpick to hold it together. It may look a bit nicer of a plate.