Braised lamb shanks are left to slowly burble in a lovely Pinot Noir with fennel, ginger, cinnamon, coriander, and more until the meat is literally falling-off-the-bone tender. One of our favorite winter pastimes is making this.

Braised lamb shanks is the sort of food that tastes even better the day after it’s made. That’s not to say braised lamb shanks in pinot noir aren’t irresistible the moment they’re coaxed to tenderness. But we’re not going to argue about making this recipe a day or two ahead of time since it’s such a boon to be able to do the heavy lifting for entertaining in advance. If you can manage to stash the shanks in the back of the fridge and resist indulging in them for 48 hours, you’ll be rewarded with richly nuanced layers of flavors the likes of which you’ve never experienced. No lie.–Renee Schettler Rossi 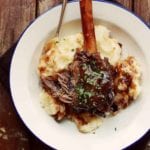 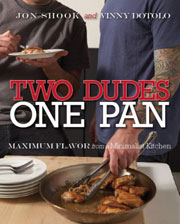 These were the best braised lamb shanks I’ve ever made. This is now my go-to lamb shank recipe. The aroma while cooking and the flavor of the finished dish were delectable. The meat was falling off the bone by the end of the cooking time and was wonderfully moist and tender. The braising liquid was, in itself, a great dish. I served some of the left over liquid over rice a few days later.

Lamb shanks are one of my very favourite things, so when I saw the title of the recipe and the list of ingredients I fell in love! I’m always on the lookout for different ways to use lamb shanks. This is a lovely dish that I will continue to make often. Personally, I’d use less fennel seeds and coriander seeds, but, otherwise, loved it. This dish is packed with flavour, and it’s very true that it’s even better the next day. The house was filled with wonderfully warm and luscious aromas—wish I could package the scent! The meat is so tender you could eat it with a spoon. Very impressive looking, yet so simple to make. It would be a superb company dish.

These braised lamb shanks smelled so wonderful while cooking, we all anticipated a great meal on a recent frigid evening. It delivered. Fragrant with spices, rich with meaty lamb and wine flavor, it was perfect served over soft polenta.

Now, this is what I’m talking about. I love braising. It breaks down the connective tissue of the meat and produces tender, juicy and flavorful lamb. I particularly love the use of fennel and mint in this dish. It’s just the perfect complement to the lamb. All of the ingredients were easy to find, and the method for creating the recipe was simple. You should use a really good wine for this dish; it makes all the difference. The authors are correct in that the lamb tastes even better the next day. I also like this recipe because I can pop it in the oven and do other things for a couple of hours.

Lamb, tomatoes, ginger, AND pinot noir? With those favorite ingredients, along with a lovely pile of others, I couldn’t resist trying this month’s choice. Wasn’t disappointed, either. Flavors blended beautifully—cinnamon and fennel sweetness balanced by the tartness of lemon and ginger, but not overpowering the lamb’s earthiness. This dish is sort of a cross between a Provencal daube and a Moroccan couscous. What a lovely reward for all the chopping and letting the cooking smells take over the house.