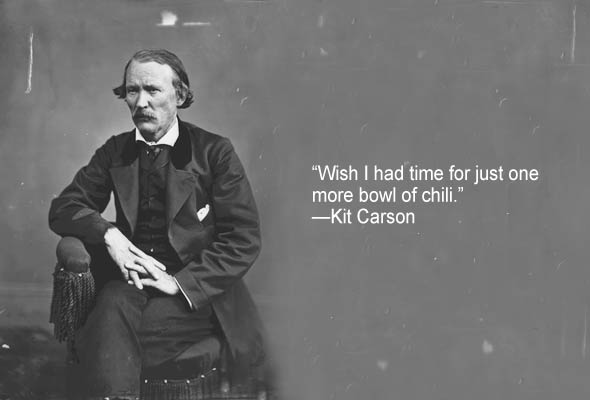 “Wish I had time for just one more bowl of chili.”

That was the alleged final utterance of frontiersman Kit Carson, who passed away on this date in 1868. A Wild West legend even in his own time, the guy was a jack-of-all-trades. Fur trapper. Rocky Mountain guide. Soldier. Rancher. You hardly can blame the guy for this manly deathbed craving. A 19th-century Marlboro Man, someone who makes Clint Eastwood seem like a scaredy-cat, needs the kind of sustenance only a cauldron containing long-simmered meats, beans, and spices could supply.

And, on a practical note, it’s especially easy to understand why Carson was so keen on chili. Regardless of what sort of beast he had just felled or what he and his fellow frontiersmen managed to scrounge along the trail, they could chuck it in a kettle with some beans, tinned spice, and water lugged from the nearest creek, and leave it dangling over the campfire while they traipsed through the hills. When they returned, exhausted from doing mountain-guy sorts of things all day, a hearty, restorative, rib-sticking dinner awaited. So much the better if there happened to be a nice hunk of cornbread on hand to sop up the spicy juices. And to wrap up the meal? A rousing round of “pull my finger.”

Many of chili’s trail-appropriate traits are what keep us with the stuff today. Versatility. Simplicity. Popularity. Prefer turkey or chicken to red meat? Go right ahead. Not a meat eater? Not a problem. It’s infinitely variable, chili. Its one-pot-wonder status doesn’t hurt, either. And it needn’t be confined to, er, chilly weather. We regularly invite the robust stew of sorts to our backyard summer gatherings, where we down it with beer, dunk chips in it, pile it on burgers off the grill. And you can still use chili to test your pals’ mettle. Just toss a few habaneros into the mix and see who cries first.—Erin Carlman Weber