Inspired by the New Mexican stew carne adovada, this chili features meltingly tender chunks of pork in an intense, richly flavored red chile sauce. The slow cooker was the obvious vessel of choice for this easy, long ­simmering chili, and pork butt was the ideal cut of meat; with plenty of fat marbled throughout, it resulted in supremely ­tender chunks of pork that didn’t dry out.

For the sauce, chili powder, oregano, and chipotle chiles provided a solid layer of warmth and depth, while fresh coffee brought a balance of robust, bittersweet flavors. Since the flavor of dried chiles is sometimes described as raisiny, we went to the source, adding raisins before serving to achieve fruity nuance. Stirring in fresh cilantro, lime zest, and lime juice at the end helped brighten this earthy dish. [Editor’s note: Don’t forget a batch of biscochitos for dessert.]–America’s Test Kitchen

What is pork butt roast? 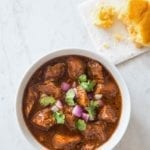 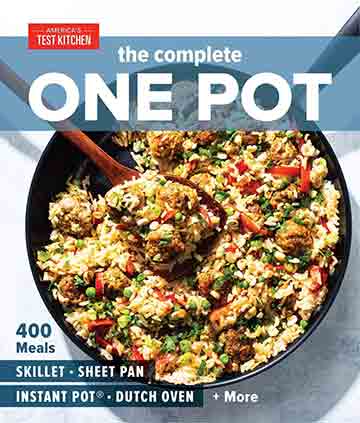 As my husband said, “This is just delicious!” It’s a warming plate of delicious goodness made with ingredients you probably have in your pantry and super simple because it’s made in a slow cooker. The resulting stew has some heat but isn’t too spicy hot. Use all the ingredients – the chilies, brown sugar, raisins, coffee and lime juice – that’s what yields the deep balanced flavor.

I was a little apprehensive about using the amounts of chili powder and chipotles listed but the long, slow cooking melds the flavors into the pork. The gravy needs to be sopped up and savored. We loved it with cornbread and next day leftovers were spooned over creamy grits. Mashed potatoes or rice would be a great side dish, too.

The familiar lure of a batch of chili makes an enticing promise – a bit of prep and then time does the magic. By the time you are able to smell it, you are eager to dip your spoon in. If you take advantage of cooking it overnight, you may find you crave a bowl of red for breakfast.

This recipe has been written with a slow cooker in mind, but an oven set at 200°F will do very nicely as an alternative. This recipe also makes very effective use of the microwave in a way I had never thought of, getting the onions and spices to a softened, nearly transparent stage with no fuss. That is a brilliant trick I will be borrowing for many dishes.

Prep work (chop onions, mince garlic, chipotle, etc) all can be done earlier in the evening and even set aside. While the onions, etc. goes into the microwave, you can prepare the pork (I used a slender boning knife to assist my dividing but left it in slightly larger chunks by error, but it all fell apart fine in the end so no harm). I did place a parchment circle on the bowl of onions for cooking in the microwave. Preheat the oven, brew the coffee and put everything into a large dutch oven, and pop it into the oven overnight.

In the morning (I gave it about 9½ hours), I set it on the stovetop to cool and took time to remove some fat (ladling, straining and returning solids to pot while using a fat separator and removing about 100ml of liquid fat, plus maybe 70ml (⅓ c) of fat I hadn’t caught in trimming. Then I reheated and added the raisins (I used sultanas, or golden raisins), lime and cilantro. I reserved a few sprigs of cilantro and grated some cotija to garnish.

This makes a very decent bowl of red, flavourful yet not hot. While I used the full 2 tablespoons of chipotle, I found adding more when reheating brought it closer to my usual ideal of New Mexico style red chili. For more depth to the heat, you could also increase or add chile powder — making the addition a slightly spicier one. I personally would appreciate the intensity that a couple shots of espresso might provide in place of the brewed coffee (I think 2-3 short shots would be perfect). None of these tweaks would take away from the ease of this recipe which works remarkably well. The raisins add a really special nice note, a reminder of how they belong in so many southwestern dishes and I tend to forget how much I like what they add.

For a thicker chile, I would remove the meat, reduce, then add the meat back in, so as to not overcook the pork and ruin the texture (just my strong aversion to overcooking meat). This is a welcome meal whether freshly made or stashed for future (and I am not alone in saying chili is always better the second day, though waking up to it was pretty darn good and irresistable).

Bonus round: leftover New Mexico style chili makes a perfect Huevos Ranchero for a weekend breakfast, letting you close your eyes and taste the memories of breakfast on Old Route 66 in a worn booth at Joe & Aggies, talking to waitstaff and strangers who are now your friends, saying yes to refills of sturdy coffee.

The ease of pulling off this chili is totally belied by the depth of flavor that the slow cook and combination of chiles provides in the final dish. This was indeed rich and robust, as the author suggests, and I’m wanting to turn around and make it again right away. I’ll admit to being initially hesitant about the raisins, but much to my surprise, we couldn’t even taste them in the final dish. (In fact, I didn’t even see any raisins while eating the chili, and was only reminded they were there when I noticed one as I scooped leftovers into some Tupperware.)

After the cooking period, the meat was tender and the broth aromatic and tasty, but there was too much of it and it was thinner than I wanted for a chili. To remedy this, before I added the raisins, I transferred about 2/3 of the liquid to a small saucepan and reduced it over medium high for about 10 minutes, after which it was nice and thick. I married it back to the pork mixture and then proceeded with adding the raisins, cilantro, lime zest and lime juice and the texture was rich and inviting.

I did have to make some adjustments to the sugar, lime, and salt levels, but once I did all of the flavors really popped and the depth of the chili powder and chipotles was perfectly underscored.

I served the chili in bowls with a scoop of rice, a dollop of sour cream, some chopped scallions and a few lime wedges, which I highly recommend. (I added one more final squeeze of lime to my bowl at the table and it put everything over the edge in the best of ways.)

My eaters were really impressed with the recipe (and I marveled at the clever microwave shortcut for the onions), and with a few little tweaks I’d be willing to elevate my score to the rare (for us!) rating of a “10” on the TC scale. This is one very, very good chili to add to your repertoire.

This is a different style of chili than I usually make with ground turkey or beef, so it was a nice change of pace. Coffee adds a chocolatey flavor that blends well with the ancho chili I used. Raisins were a pleasant add for a touch of sweetness. Satisfying dish!

This recipe is so delicious and so easy to make! I love slow cooker recipes that don’t require a lot of pre-preparation. Using the microwave for the little bit of prep prior to putting everything in the slow cooker is fantastic and makes for a quick and easy cleanup. The end result is full of flavor with super tender meat. I will definitely be making this one again.

I cooked it 9 hours on low.

We had the chili with warmed tortillas and cilantro-lime slaw and it was a wonderful dinner.