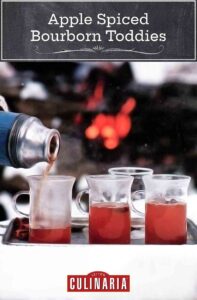 Apple spiced bourbon toddies are a quintessential cold-weather bevvie. Warm cider, a touch of spice, and a solid glug of bourbon will warm you from the cockles out. Perfect for when the evenings start to get a little nippy.

What makes this recipe really sing: Don’t skimp on the fresh cider here. When the cider is simmered and thickened, the flavor is intensely apple, and intensely autumn! Star anise and cinnamon stick will fill your house with a delicious aroma—you might want to quadruple this recipe and keep it warm on the stove throughout a cold winter evening with friends.–Claire Robinson

Can I reheat this recipe?

You can! For whatever reason, if you’re making it ahead or if you have some leftover, it will be okay in the fridge one more day. We would suggest removing the cinnamon and star anise before putting it away. You can add a new cinnamon stick garnish when serving.

Can I make a larger amount of bourbon toddies?

Absolutely. If you want to make enough for a party, just scale up the ingredients until you have the amount that you want. Because you’re warming it up anyway, using a bigger pot or slow cooker will serve as a nice warm punch bowl, too. 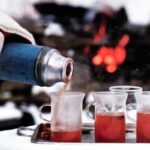 Toss a few slices of crisp apple and a squeeze of orange juice in the warm cider if you have it. For a true toddy, float a pat of butter on each drink and relax by the fire.
Prep 5 mins
Cook 10 mins
Total 15 mins
Drinks
American
4 cocktails
263 kcal
5 from 1 vote
Print Recipe 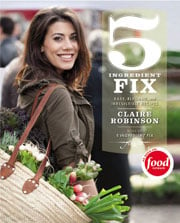 This made me long for a cool autumn evening with a roaring fireplace (it was 86°F (30°C) outside when I made these apple spiced bourbon toddies, so that is quite a feat!). I used unsweetened apple cider, since this was to be reduced, and it was quite sweet and full of apple-y goodness. My house was bursting with those beautiful, sweet, fall apple aromas.

The lemon juice brightens and offsets the sweetness quite well, and the flavor of the bourbon really blooms from the heat. Adding the cinnamon and star anise at the end gives it a nice hint of spice, without being overpowering.

The final amount here is three cups, which provides a healthy dose of bourbon in each cup, and we went for it with gusto and shared it between the two of us. We were both a little toddled from the alcohol in these toddies (which is the point, after all, isn’t it?!), but they’ll be a delightfully warm and soothing sip to have on a cold, chilly day.

Winter is my least favorite season. I just don’t like being cold. But this year, it will all be more bearable, thanks to this delicious, warming apple spice bourbon toddy. I’m envisioning coming in from a long hike on a cold day, chilled to the bone, lighting a fire, and warming myself from the inside out sipping this bourbon-spiked drink.

The flavor is, as promised, intensely apple-y. The bourbon is discernible, primarily from the characteristic vanilla overtones it lends to the drink. The spices fill the house with an aroma that will draw everyone into the kitchen to find out what’s on the stove.

I often avoid spiced cider and toddies because they’re usually too spicy, too sweet, or too lemony. I like the idea of simmering the cider to reduce it and concentrate the apple flavor. To me, this recipe gives pure flavors of cider, bourbon, lemon, and spices, rather than something diluted with water and then enhanced with sugar or honey.

The star anise is a very nice touch. I think a small squeeze of orange juice adds a little sparkle. I followed this exactly, a pat of butter and relaxing by the outdoor fire included. A great winter and holiday drink to offer guests. Will try this with dark rum or other types of whiskey.

DEEE-LISH! We went apple picking last weekend and used some of the cider that we brought home. Simmering the cider down to thicken it really made this recipe stand out from others that tell you just to heat and serve. Our cider was a little on the tart side to start with, though, and the whole lemon ended up being way too much, so make sure to adjust the lemon juice according to your cider.

We used my favorite bourbon—Baker’s—which worked really well, although maybe it was a little TOO nice for use in a strongly flavored mixed drink. I think next time I’d use something a little less expensive but still high quality, such as Maker’s Mark or Knob Creek.

It seems I had to be ill to appreciate a toddy in the past, but not with this one. I love the way the flavors blend so nicely. I’ve made a number of different toddies and still have my favorites, this now being one of them. I’d recommend starting with half the lemon juice and then adding more to your taste. If you’re into spicing it up a bit further, mix your favorite apple pie spice with some granulated sugar. Then rim the mug, cup, or glass before filling it with this wonderful elixir.

We can’t wait for winter so we can enjoy more of these apple spiced bourbon toddies! What a delicious and warming drink. The “makes three cocktails” was a little strange—too much for two people, even though we tried. Next time, I’ll work with the amounts and try to make it for four people. It was such a simple recipe to follow. I kept it covered on low heat for 20 to 30 minutes, until we were ready to enjoy the cocktails.

It could definitely be made ahead for guests. I added the pat of butter on each drink as suggested — great addition. The flavors were wonderful together, and we’ll look forward to enjoying many, many more toddies this winter!